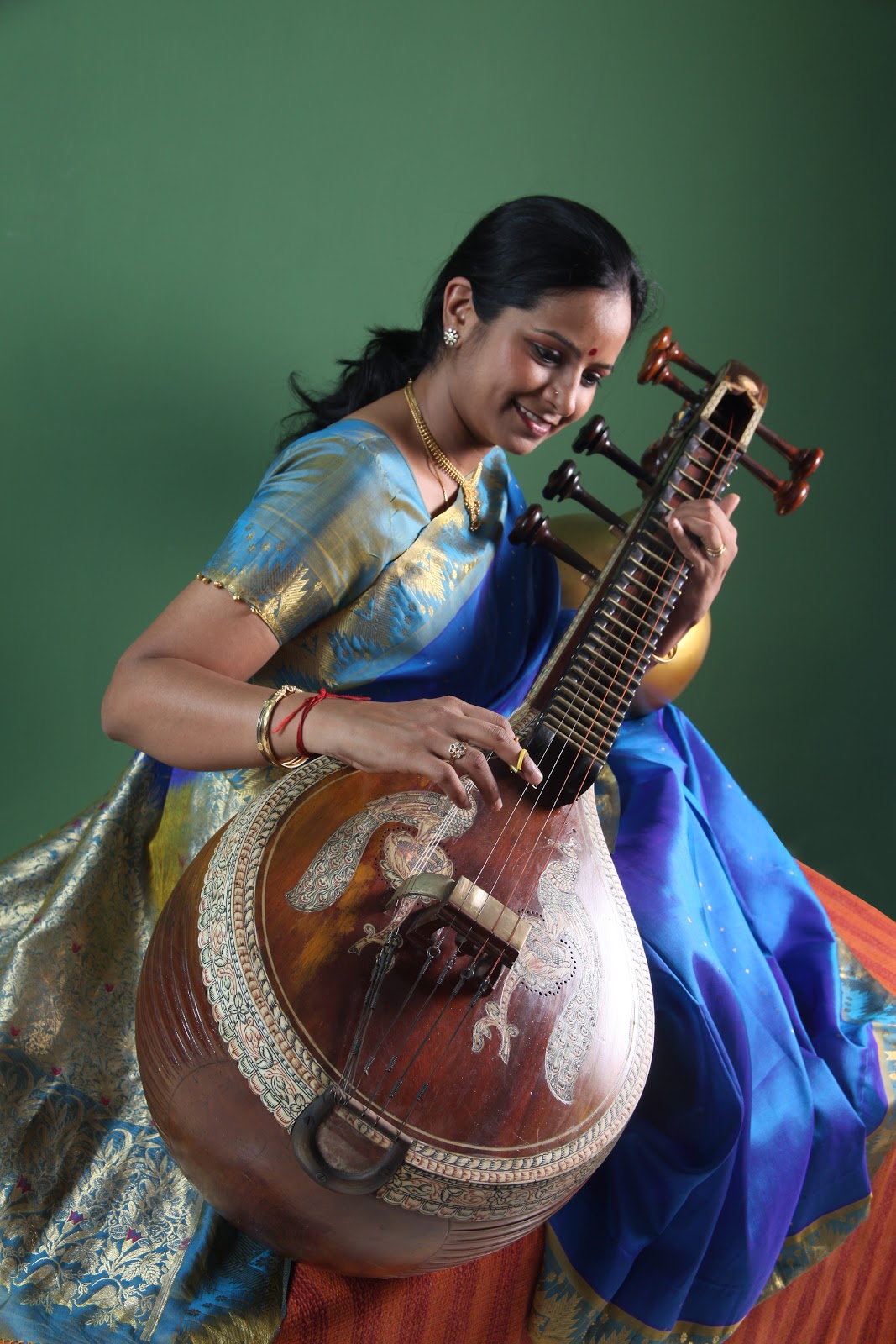 “I see many young people wanting to learn the veena. Whether they want to take it up as a profession is something I’m not sure about.” I’m talking to Jayanthi Kumaresh, renowned veena artist, at her home. We’re seated in what’s obviously a prayer room, with its large pictures of the Chandrashekara Saraswathi, the revered former head of the Kanchi Mutt. Three or four veenas stand upright against one wall. Her observation was in response to my query about the state of veena playing and where she saw it headed.

Jayanthi puts me at ease with her charming personality and melodious voice. For all the accolades and awards that have come her way, fame sits lightly on her slender shoulders. Despite having just returned from Chennai and her hectic schedule of the last few weeks, she’s energetic and her enthusiasm contagious when we speak of her music. She briefly alludes to the interesting program “Panch Tantra” that she was a part of in Chennai.  The event featured five musicians including her, playing the piano, tabla, veena, violin and vocals. Her own segment in the performance was about illusions and how everything leads to God. Something like this, even experimental is possible, because “the veena can complement other instruments easily across different musical genres” she adds.
Jayanathi’s journey of learning and making music began early, starting from when her fingers first plucked the strings of the veena at the age of three. “While my training began under my aunt Padmavathi Ananthagopalan and continued with S.Balachander and influences from my uncle Lalgudi G.Jayaraman and mother R.Rajalakshmi has been undeniable, I also imbibe from other musicians I work with,” Jayanthi admits. The learning never stops.
Having lived and learned in Chennai, the mecca for Carnatic music, does she feel held back in any way, I wonder.  Living in Bengalooru, a city which has a cosmopolitan outlook has its own advantages for musicians according to her. Much of Carnatic music being devotional in nature, there’s great emphasis on the lyrics, particularly in Chennai and vocalists get a great deal more attention she feels.
Bangalore she believes is a melting pot of musical genres and there is a wide appreciation for all kinds of music. “I meet musicians from different genres here and collaborate with them. There is a great opportunity for instrumental music to thrive in this city,” she states.
Here is a snippet of Jayanthi Kumaresh playing a Ragam-Tanam-Pallavi in raga Sarasangi.
By no means is her love for music confined to performing alone. With her husband Kumaresh (himself a renowned musician, and one half of the Ganesh-Kumaresh violin duo), Jayanthi is planning to organize monthly concerts in South Bangalore in partnership with Tamarind Tree. “I want to set up a foundation for the veena – a one-stop resource centre for anyone wanting to learn about the instrument. Whether its recordings, books or places to buy the instrument, she wants to make the information easy to find.
“Pandit Ravi Shankar made the sitar accessible to the world, I want to do the same for the veena.”
About Chitra Srikrishna 0 Articles
Chitra Srikrishna is a Carnatic vocalist and writer living in Bengaluru & Columbus. Chitra blogs for Sruti, runs the podcast Raga Ruminations and produces RaagTime, a radio show on Indian music. Her albums include devotional poetry of Tamil Alwars & Dasa kritis, & thematic compositions on Rama and Hanuman. She's the musical half of a multimedia performance duo HumRaag. Her program BHAKTHI explores the journey of the mystics of India. Her latest Antah Prerna -A Musical Telling of an Entrepreneur's Journey debuted at Bangalore International Centre in 2018.
Website Facebook Twitter YouTube LinkedIn