I feel rather insulted when people say Indira Nagar or Koramangala is ‘…such a happening place!!!’ or some such silly thing. I mean, Malleshwaram is as happening a place as either of them. What could possibly make news in Indira Nagar? Another P3 type PYT strutting about with a barely there LBD? Another Italian ‘ristorante’ making its debut on 100 feet road? Pshaw!!

In Malleshwaram, what makes news is not the debut, but the death of a ‘ristorante’, especially if it had the effrontery to spell its name in that manner. When a naïve Johnny-come-lately troops in with a fancy joint, we wait gleefully, we trade bets. We know sooner or later, he will be the late Johnny-come-lately.

We don’t care for the ristorante-vistorante types. We like our Darshinis, we like our idli and dosa and filter coffee; the only aberration we allow is a paneer or a cheese (Amul) added to the dosa. When we start arguing about the merits of CTR dosa versus Janatha Hotel dosa versus New Krishna Bhavan dosa, its war. Don’t even get me started about the Mantri mall in Malleshwaram with its fancy non-darshani eating places. Mantri mall is called Mantri Square for a good reason. That is the shape we identify ourselves with best. 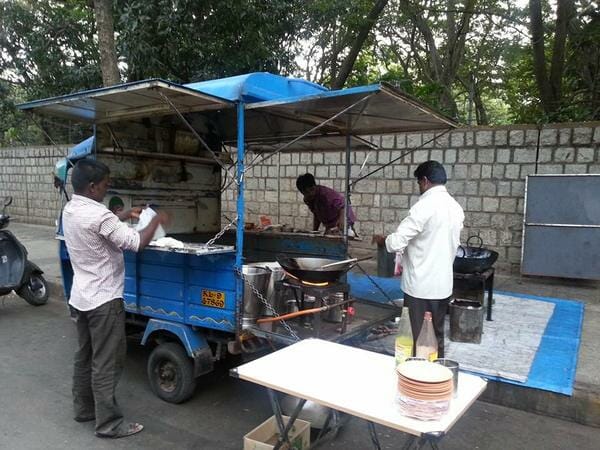 Chats and darshinis thrive in Malleshwaram, even when there are MNC eateries like McDonalds and Papa Johns. Pic: Pratvii Ponnappa

Malleshwaram is a grand old lady of Bangalore and we let this be known by pesky upstarts like Indira Nagar. First, typing the name itself requires a certain meditative mien to ensure that all the letters are in the correct order. Then, look at the name. Its ancestry can be traced back 500 years to the venerable Kadu Malleshwara temple. Malleshwaram itself has been around for 116 years!

Indira Nagar? Let’s not even go there.

Talk about the names of our roads? Sampige Road, Margosa Road—names that instantly throw up an image of grand avenues of trees, never mind there is not one sampige tree on Sampige Road, or a neem tree on Margosa Road. At least we escaped the ignominy of having a main street called 100 feet road. 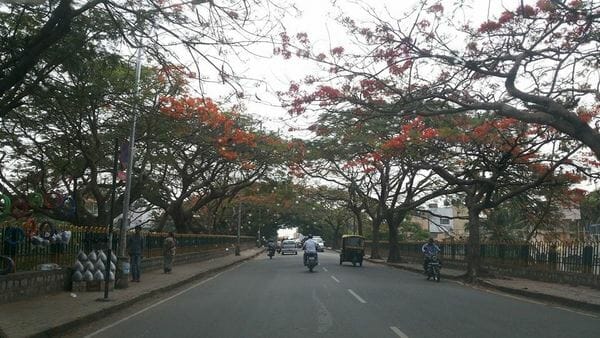 Where else in Bangalore will you see such picturesque roads? Pic: Pratvii Ponnappa

The lingua franca of people who inhabit those buildings must be English, or sadly, even Hindi? But in Malleshwaram, it is definitely Kannada. Err, actually it might be Tamil of the Iyengar sort. Or possibly it might be Konkani. Perhaps Telugu even? God knows! It’s not Hindi for sure. And it’s not the Queen’s English that is spoken here. We speak the Maharani’s English, where every word ends with an ‘a’ or a ‘u’, and every sentence starts with ‘You see…’ or ‘The thing is…’.

In Malleshwaram, we are untouched by flitting fads and fashions. While women in Indira Nagar dress down when they are dressing up, we Malleshwaram types—when we dress up—it’s like, WOW! Six or nine yards, no less. We don’t skimp on material here. Then, we put on enough jewelry to make you green with envy (or nausea). That sort of accessorizing needs some heft to hold it up, so our women come in plus sizes. The final touch is with flowers, freshly bought by the ‘mola’ at Sampige Road. Not for us those no-smell Dutch roses or effete orchids. We believe in fragrance that can knock one out. Come to Malleshwaram during Navratri and you may need to get carted away on a stretcher.

In fact, come Navratri, come Ganesh Chaturthi, come Ram Navami—any Hindu festival turns Malleshwaram into a madhouse of sorts. 8th cross becomes a shopper’s delight and nightmare by turns, as the frenzied buying of flowers and fruits leaves mountains of debris on the road the next day. No worries though. In Malleshwaram, we have cows aplenty. We have donkeys too. Sometime ago, we had a sizeable simian population here. We have bats that fly in here from Sankey Tank and they create quite a spectacle as they fly over our skies at gloaming.

So, basically any sort of animal will feel at home here. If you are the typical law un-abiding, spittle-spewing, mad-Max type of human animal that resides in the rest of Bengaluru, you will meet your exact counterpart here. Except that your welcome might include a ‘Bhagyada Lakshmi baramma’ played awfully by the local Nadaswaram guy.

Banni! Come to our happening Malleshwaram!

Welcome to Malleshwaram that you haven’t seen!
Cyclists and skaters take over roads in Malleshwaram
How about a food street for Malleshwaram?
‘Development’ rattles Malleshwaram – the peace-abode

About Suchitra Deep 2 Articles
Suchitra Deep is co-founder and partner at Firm Terra Architects, Bangalore. She is the founder of Malleswaram Social, a civic initiative that engages in local issues and an active member of Sunaad, a Hindustani classical music group. She is also a meditation trainer.