A couple of months ago I wrote a couple of articles on my struggle to get a lamppost repaired on the street where I live. The issue was not that the light was faulty—but 15th Cross Malleshwaram is supposed to be a ‘model road’ where the utilities are buried under the footpath. However, a BBMP repairman who had come to repair a streetlight next to it had just connected a wire from the lamppost to the streetlight about 10 feet above the ground. I requested him to do a proper job but he did not heed to my request. Apart from being unaesthetic, it was also a little dangerous. And in any case the street light did not work (and in fact, still does not!)

A lamp post dangling dangerously on the nearby compound. Pic: Ramesh Sreekantan

So I wrote to several agencies to get the work done properly. BBMP created several complaint numbers and called me several times asking me if the work was done. No work was ever done. At some point some repairman came, asked me what the problem was (clearly a hanging wire does not present a problem in his book!).

However, providence came to my rescue. A couple of weeks ago a careless truck driver reversed in to the lamp post and bent it to the point that it was touching the fence of my house. As I was concerned that it could be a potential electrical hazard, I contacted BBMP again—by sending emails to various agencies and sharing it on a Malleshwaram ‘What’s App’ group. I also sent and email to out local MLA, Dr. C N Ashwath Narayan. 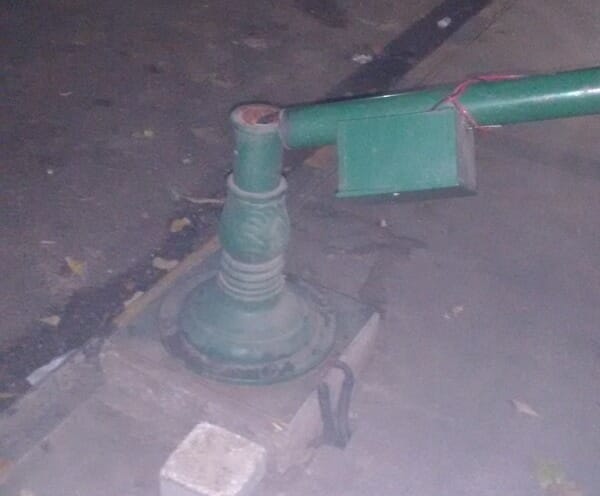 It seems like that did the trick! The next day the folks from BBMP came and removed most of the lamppost. While doing that they also disconnected the offending wire! So at least at the moment the problem has been ‘solved’. Except that now all that remains of the lamppost is a stump.

I’ve been assured by the BBMP and MLA’s office that the lamppost will be replaced. As of now, about 10 days after the incident, there is no sign of that. 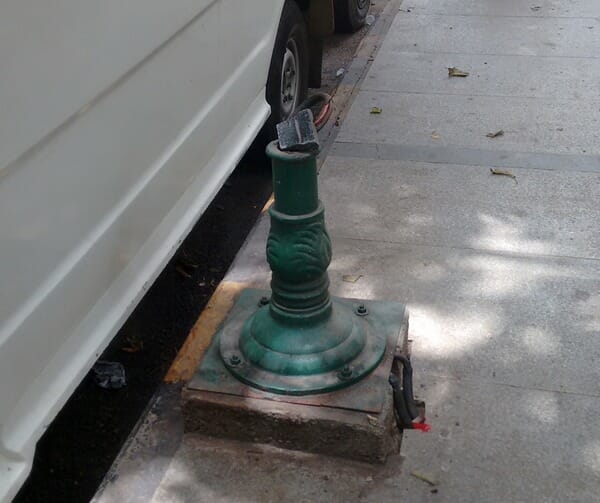 This goes to show how broken the system is. With great fanfare, BBMP announced the BBMP Sahaya website and Malleshwaram Sahaya website. However, apart from causing the hapless call centre employees to have to bear the brunt of the curses of  irate citizens, this seems to have no effect. The only thing that seems to work, at least in Malleshwaram, is to email the MLA. One would think that his office would have better things to do than having to deal with non-functional lampposts on the occasional street, but apparently there is no other way to get such problems addressed.