True to his promise, the Upa Lokayukta Justice SB Majage visited Yelahanka’s Allalasandra Lake and Puttenahalli Lake on 30th March 2014. As reported earlier, a follow-up of his February inspection was due in the first week of April, but he made it before time.

Local groups have been earnestly following up with LDA / Forest Department and BWSSB to resolve the problems faced by the two lakes:
– water quality degradation due to continuous inflow of sewage, through storm water drains, broken sewage chambers and a dysfunctional STP
– foul smell
– mosquito nuisance
– contamination of water in neighbourhood wells and borewells.

At Allalasandra, office bearers of YUVA Dr SP Tayappa, Mr Chandru, Mr Narayan and other members, escorted the Upa Lokayukta around the lake. BWSSB officials including Chief Engineer Mr T Venkatraju, Additional Engineer Mr SP Rudramurthy, Yelahanka Sub-divisional engineers and LDA CEO Mr Shivanna were also present and they were shown the various sewage entry points. At the last inspection BWSSB had set itself dates in February to stop the sewage at the two lakes, but it did not meet these deadlines. 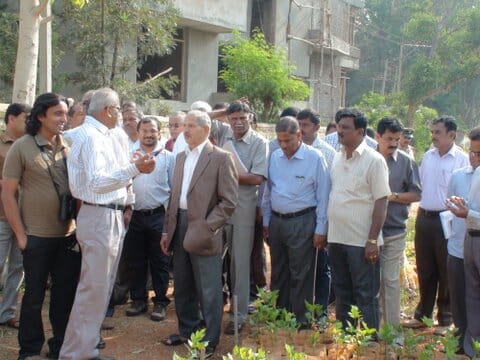 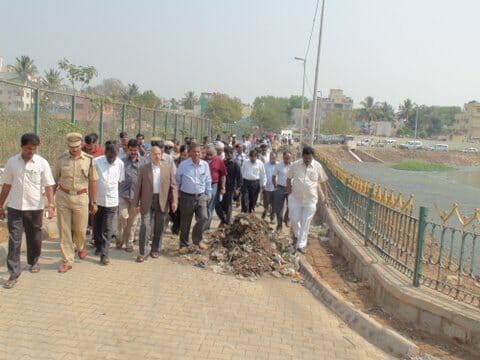 After discussions between the Upa Lokyukta, residents, BWSSB and LDA, the following action points were listed:

– BWSSB would call for tenders for the sewage pipe line works after the Lok Sabha elections on 17th April 2014.
– Works to stop sewage entering the lake from the broken sewage chambers would be complete by 30th May 2014.
– A mini STP plant would be commissioned within a year (confirmed by BWSSB Chief Engineer).
– The horticulture department would complete the ongoing development works at the lake within the next two months.

– The Detailed Project Report (DPR) would be completed within 2 months (confirmed by LDA CEO).
– Sewage stoppage works would be taken up by BWSSB after the DPR is ready.
– The revival of the non-functioning STP would be started by BWSSB shortly, which would provide treated water to the lake.

With YUVA, YPLBCT and VRWA keeping the pressure on, it is hoped that by the time the next review happens (in a couple of months), some of the action points will have seen reasonable progress towards completion.