In December 2013, Justice Subhash Adi, the second Upa Lokayukta (appointed in Mar 2013), caught the public eye after he gave the BBMP and BWSSB three months to clear encroachments and sewage inflows at various lakes in Bangalore.

Justice S.B. Majage, the first Upa Lokayukta has also been giving attention to lakes. After his inspection of Yelahanka’s Allalasandra Lake in October 2013, he set the agenda for BBMP and BWSSB to rectify the problems faced by the lake. To check the progress for himself, he followed it up with a visit to the lake on February 2, 2014, in the presence of members of Yelahanka United EnVironment Association (YUVA), a voluntary group of citizens that is keenly interested in the proper revival of the lake, Yelahanka MLA S R Vishwanath and other officials.

BWSSB has stopped letting in water from the Yelahanka STP into the lake as its quality was inadequate. The inspection report of the STP from the Pollution Control Board indicates that aerators are not working and the right treatment process is not followed by the STP resulting in a foul smell in the locality. BWSSB officials have agreed to take action to reduce the foul smell from STP.

One option is the commissioning of a sewage treatment plant on government property at the inlet points so that treated water can be supplied to the lake. BWSSB has agreed to study the feasibility of the same and BBMP has agreed to fund 30% of the cost of the plant. BWSSB has committed a deadline of February 20, 2014 to UpaLokayukta to stop the sewage from entering the lake. BBMP has said it would be providing a temporary bund in the lake to act as natural filter to stop sewage, if it still escapes through, from spoiling the entire lake.

Discussing weed control for the lake, YUVA had indicated that as a long term solution, biological control of weeds has been recommended by Directorate of Weed Science Research (DWSR), Jabalpur, MP. Dr Sushil Kumar, Principal Scientist is visiting Bangalore on March 1, 2014 to give a presentation on weed control to BBMP and YUVA members. MLA S.R. Vishwanath mentioned that grass eating fishes would be released into the lake for controlling the hydrilla. 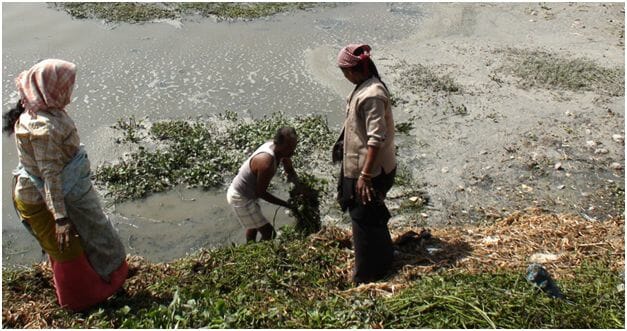 With a view to improve the habitat for birds, the advisory services of scientists from Indian Institute of Horticulture Research, Hesaraghatta and GKVK have been sought. The scientists have agreed to help in planning the garden and trees around the lake.

Various ideas for education, information and environment awareness in the park were discussed. These included rainwater harvesting and solar energy models, waste management display boards, a covered stage that could be used for activities such as children’s summer camps, discussion sessions, yoga, creative workshops. Also discussed was the possibility of introducing boating, fountains, laser shows and flower shows for making this a picnic spot.

The CEO of Lake Development Authority (LDA), that is in-charge of this lake has indicated that the Detailed Project Report (DPR) would be prepared, which would include facilities, such as a pathway around the lake, lighting, garden, etc. to make the lake visitor-friendly.

The next inspection of the Yelahanka lakes by Justice Majage is scheduled for the first week of April 2014.

Thanks to Jagadeesh Giri and Dr S.P. Tayappa of YUVA for the information and photos.