Some of the happenings about Bangalore’s lakes this past month. Click the links to read the full stories and reports.

The days of Ganesh Chaturthi are usually high tension for lake lovers in Bangalore. A couple of weeks before the festival there were reports of how BBMP was gearing up, given that 3 lakh idols were expected to be immersed. There was a lot of publicity to persuade people to get eco-Ganeshas and encourage immersions in mobile tanks.

Worshippers though seem to have had other ideas to please God. While there is no accurate record of the actual number of Ganeshas sold or immersed, data collected on the resultant lake pollution does not look good. Wonder what Ganesha is thinking after seeing the pictures posted by Malleswaram resident Vani Murthy on her facebook page. Taken at Sankey Tank, they show hundreds of Ganeshas in various stages of decomposition. Many in fact would never decompose and could actually be salvaged for next year. See one of her many pictures below. 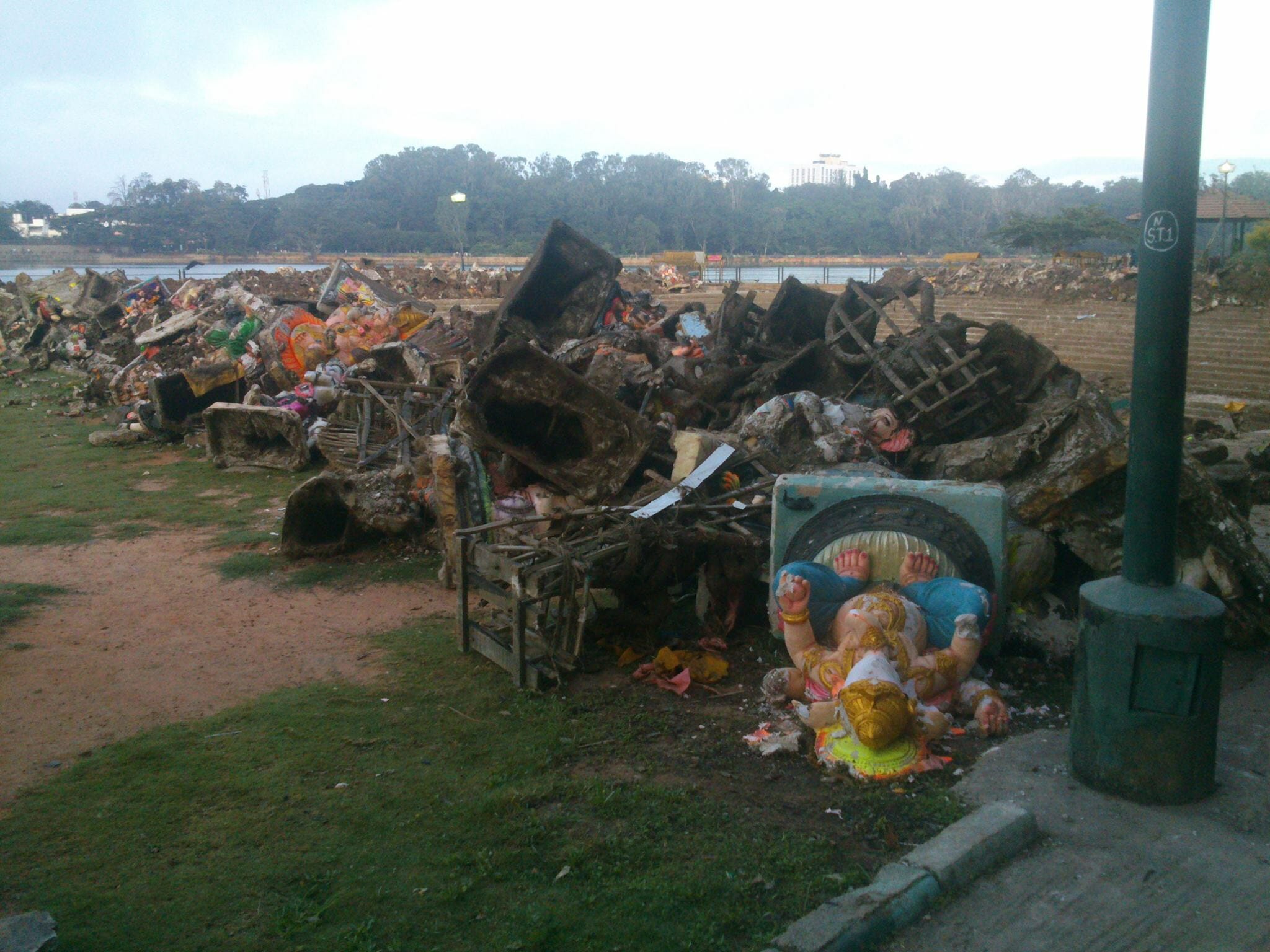 With the heavy rainfall during this past month, many of the lakes are full. While the lake lovers would be rejoicing, those whose homes got flooded (attributed to encroachment of storm water drains) have been left with much to do to prevent this in future. There are some lakes that do not have connectivity to catchment areas and these are still water deprived. In Bangalore, storm water drains and lakes are closely associated and a focused effort can ensure that lake revival is no myth.

On 29th August 2013, the government was issued a contempt of court notice by the High Court for failure to form lake protection committees.

The Chief Minister made a surprise visit to Agara Lake, following reports of dengue in the HSR area.

Prompted by media reports on violation of environment laws, the Lake Development Authority inspected Bengaluru’s controversial SEZ project off Bellandur Lake and asked KIADB to stop the construction. A PIL filed by citizens is still in court.

Much still needs to be done to save the land of a thousand lakes. The rains this year will relieve the water crisis, but for long term sustainability, the lakes are the key.

When citizens come together, it has been shown that lakes can be successfully sustained. Kaikondrahalli Lake is a thriving eco-system and full of birds. Puttenahalli Lake at long last has water and is becoming an avian nursery. Residents of Alahalli Lake area are working every weekend to clean up their lake and bring it back to life.

Narasipura Lake in Vidyaranyapura has been facing an unexpected challenge, theft of bamboo shoots!

Challakere Lake in HRBR Layout is looking for help. Citizens can surely save it!