At the tree-planting event at Munnekolala Lake (14th June 1014), it took a hundred+ volunteers less than two hours to set in soil 250 saplings!

We are pleased by the unstinted support shown by the BBMP, whose Chief Engineer (Lakes) Shri B. V. Satish and Conservator of Forests, Shri Jagannatha Rao were in attendance, and indeed made possible the entire exercise. The BBMP was of course not the only wind at our backs – citizen-volunteers from the Munnekolala Lake Rejuvenation Association (MLRA), as well as United Way of Bengaluru tirelessly planned and executed the work leading up to the event.

The work of greening up the lake-area has actually only begun. Now comes the task of watering the saplings through the next year or so. For this, the formidable volunteers of MLRA have already taken responsibility.

Next, how do we ensure that a majority of saplings survive cattle? The answer to this is the boundary fencing, which the BBMP has been completing at a good clip. 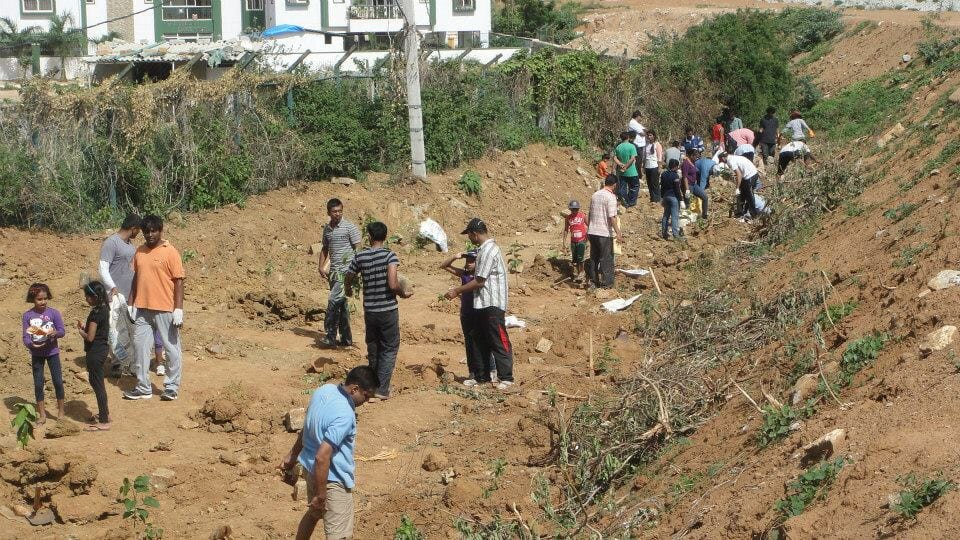 This model of local citizens (i.e., MLRA) adopting commons (i.e., the lake), with support coming from the broader community (i.e., Whitefield Rising), the government (i.e., BBMP), and corporates (i.e., United Way) has been shown to work in very many cases over the years, including in our own Bangalore. May we continue replicating this model for the many other lakes around Whitefield. Perhaps there is a lake near your locality that you want to bring attention to, and that you want to take the lead on?

Arvind Keerthi is an active member of Whitefield Rising,a community of volunteers who get together to utilize residents’ abilities to make Whitefield a better place.