Do you enjoy making motion pictures? Here is a chance to get rewarded for it too.

The Raindrops Geneva Award is a worldwide art competition by IRHA since 2007, to increase global awareness of rainwater harvesting. Held every other year, the competition chooses a different art form each time, such as posters, photos, videos.

This year IRHA invites artists for submissions for “The Best Video on the Advantages of Rainwater Harvesting: Raindrops Geneva Award 2015”. Entries should be based on one of three different themes and the best artistic works, as chosen by the jury will be awarded cash prizes in Geneva at the occasion of the world water day on the 22nd March 2016. 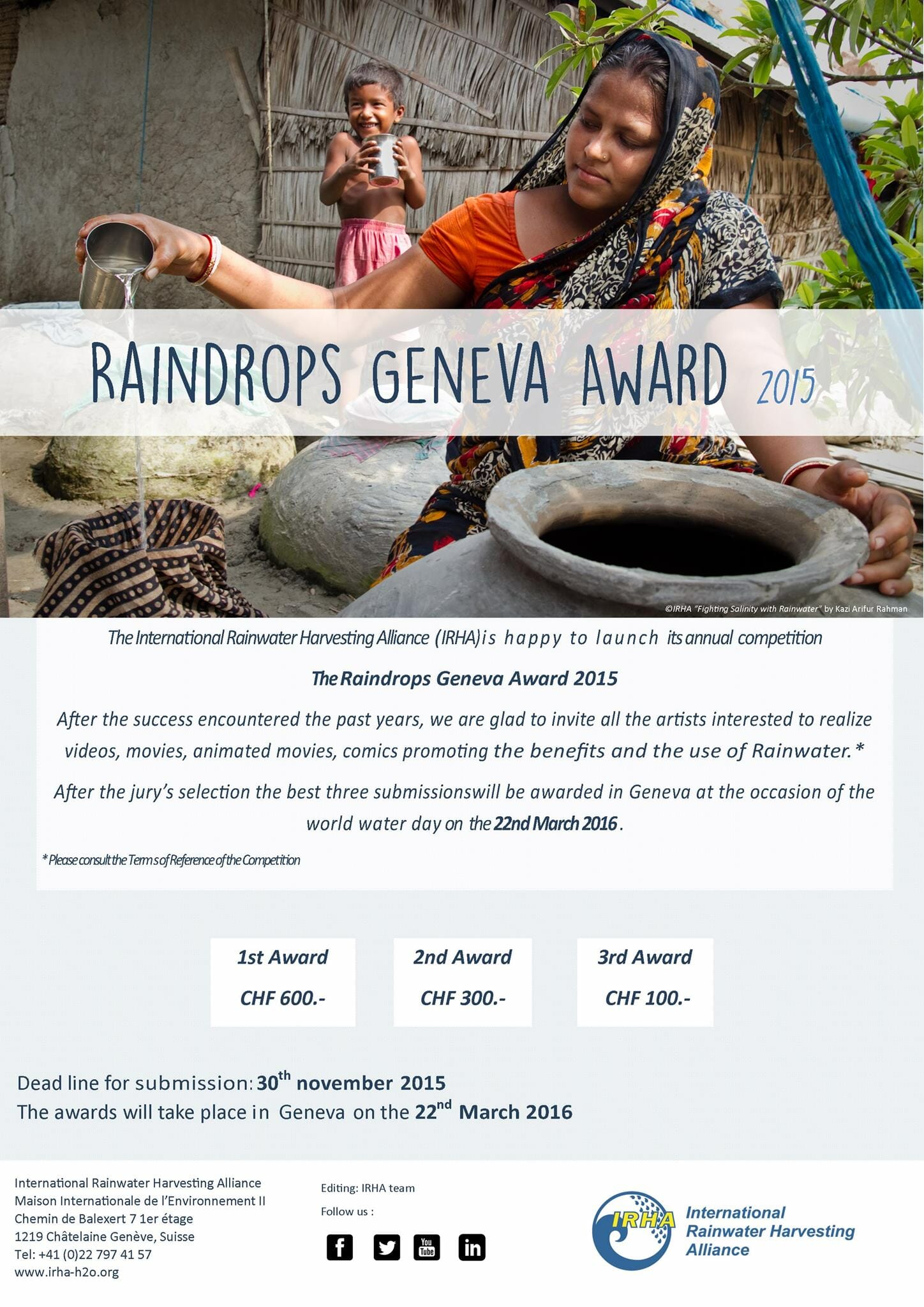 Some details of the competition are below. The form and more details can be downloaded here.

Participation
* The competition is open to all who wish to participate, without reference to age, nationality or profession. Staff members of the Secretariat or members of the IRHA Boards of Directors and Advisors, as well as family members of the IRHA, are excluded from the contest.
* There is a limit of three (3) movies per participant.
* An entry form must be submitted with every video (available on the IRHA website).
* The deadline for submission is on the 30th November 2015 at 11.59 p.m. (midnight) GMT.

Technical Details
* The video can be a cartoon, film, animated movies or be composed of sequence shots.
* The video must transmit an aesthetic message of the importance of the water management of rain.
* The duration of the video: from 30 seconds to 3 minutes (including the generics)
* The video will have to be uploaded to www.youtube.com in the best possible images and sound quality and the link sent to Raindrops Geneva Award 2015 (see below).
* Devices: smartphone, tablet, camera or any other device that records moving images.
* Preferred language: the video must be understandable for an international public. It could therefore be mute or with the use of English or French, which are easy to follow. It could be accompanied by music or not. Subtitles allowed.
* Please name your video files in the following way: o “artistssurname_01_RGA2015”
o E.g. John Smith’s first entry would be named Smith_01_RGA2015, etc.

Submissions
* Submissions to “The Best Video on the Advantages of Rainwater Harvesting: Raindrops Geneva Award 2015” can be made directly to the IRHA by sending the YouTube URL link to the work and entry form toraindropsaward@irha-h2o.org Or sent to the following address:
Raindrops Geneva Award 2015
International Rainwater Harvesting Alliance
Maison Internationale de l’Environnement II
Chemin de Balexert 7-9
1219 Châtelaine, Geneva, Switzerland

The Award
* The winner works will be announced in March 2016.
* The three (3) best videos will be awarded prizes of 700, 400 and 200 CHF:
* On an honorary basis, the five (5) best works will be exhibited and will be rewarded by a positive publicity of the IRHA, as far as it is possible.