Compared to Indiranagar and Koramangla, HSR Layout is a reasonably new layout and hence the tree cover is very sparse. With this in mind, the active citizens of the layout, the volunteers of HSR Citizen Forum came together to brainstorm on ideas to increase the tree cover.

“When we took a walk to identify locations to plant tree saplings, we saw most homes and commercial outlets had the area in front of them neatly concretized. Planting there would involve drilling through the concrete, cutting it and making space for soil, compost, sapling and tree guard,” says Krupa, a resident of sector 2, who has been leading the cause for plantation since environment day last year (2016).  Paying for electric/hydraulic drill/cutters,  arranging for electric supply, resistance from owners and lack of man-power – posed as big roadblocks to this mission. 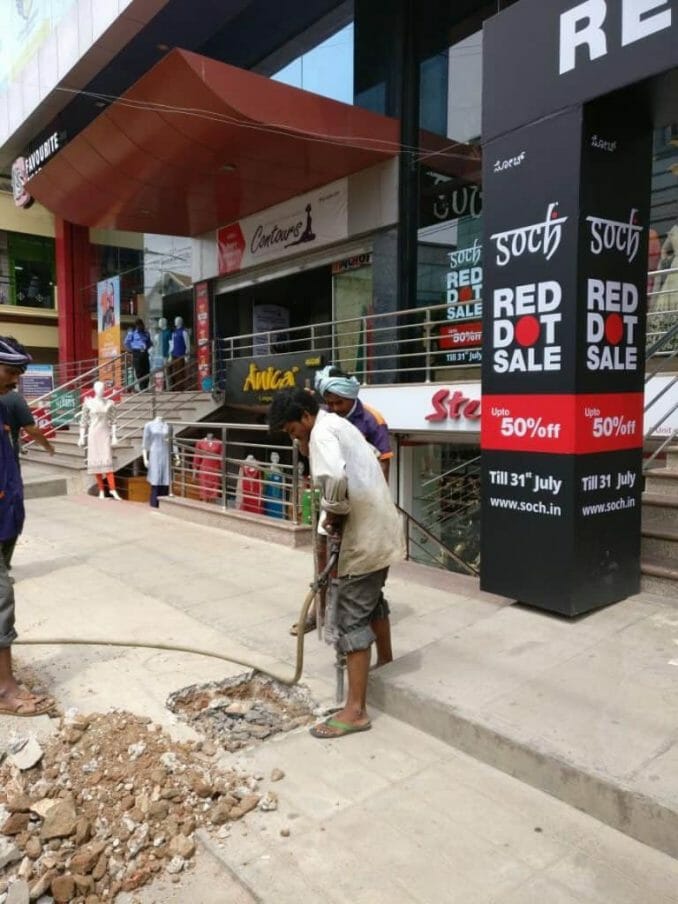 The forest department agreed to sponsor 600 trees, electric drill and labour to plant the trees provided volunteers from the Forum identified locations. BBMP agreed to provide electricity and the corporator provided the moral backing to deal with the owners’ objections. Work began in July first week.

Amidst challenges of co-ordinating between the different government bodies and resident volunteers, the team has identified around 600 places where trees can be planted. Around 300 saplings have been planted. “Some places we dug pits and were waiting for tree guards. There is no point in planting saplings without tree guards.  A passing cow or goat will chew it off.” Says Padmashree Mahesh, member of sector 7 RWA, “But once things were in place, we planted upto 50 saplings in a day. Volunteers spent long hours in the sun with the pourakarmikas as the digging was happening, I was surprised to see such support from residents”.  Were there any fights? 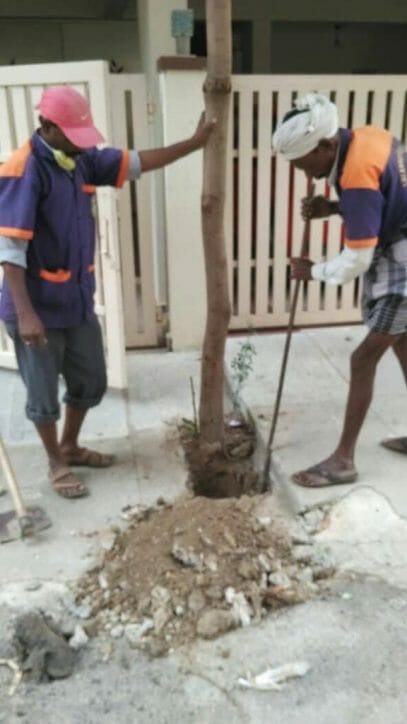 There were a few arguments, with residents objecting to the planting. Some residents thought the tree would grow up and block the ‘beauty’ of their house. A few commercial places objected because it ate into their parking space.

Between the corporator Gurumurthy Reddy, BBMP AEE Venkatesh and resident activists, the arguments were resolved. Says Chitra, a resident volunteer of Sector 1, who accompanied the drilling team on several occasions, “We ensured the planting was between two compound walls so that it didn’t obstruct any gate. Only if the owner consented, we planted in between also. Many residents thanked us for the initiative as they wanted to plant trees in front of their house, but couldn’t arrange for the infrastructure.”

What happens to the saplings now? Adds Mr. Ratnakar, a retired banker and  resident of sector 7, “Each owner/establishment has promised to water the sapling for a year. After that the tree will be able to take care of itself.” Initially, the RFO Mahesh arranged for STP water to water most saplings. The volunteers rejoiced when it started raining.

“It was a signal from God that He will water the planted saplings”, says Divya Venkatesh, who runs a playschool and volunteers in co-ordinating with BBMP. Most of the saplings provided are low-maintenance trees like Honge, Neem, Gulmohar, Jackfruit etc.

With 300 saplings planted, and 300 more planned in this week, HSR Layout is all set to transform from concrete jungle to a real one, thanks to these eco-bullies!