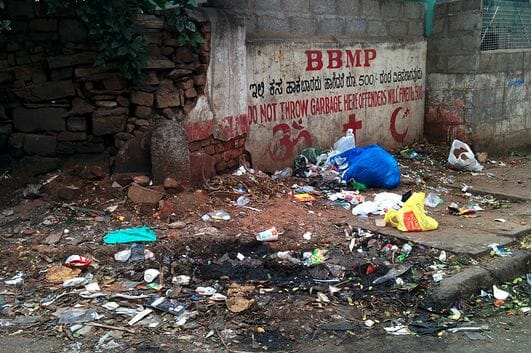 Bengaluru is full of such trash dumps, though the scenario might change for better in future. Pic:Sandro Miccoli

Scenarios such as the picture above are, unfortunately, not uncommon for a person who is taking a stroll through the roads in Bengaluru. This made us wonder—what is happening to the garbage we throw every day? And how is garbage managed in Bengaluru?

As you can see in the picture above, currently the system is neither environment friendly nor sustainable. Therefore, we decided that we will focus our project around waste management in Bangalore.

This five-month project is a collaboration between the MediaLAB Amsterdam, Fields of View, IIIT-Bangalore and Cisco. Our team consists of five people: Sieta van Horck from the University of Amsterdam (UvA); Tanmayee Narendra and Pawan Dhananjay, both students from IIIT-Bangalore; and Sandro Miccoli from Federal University of Minas Gerais (UFMG) in Brazil.

We are being mentored by Sruthi Krishnan from Fields of View. We have been focussing on researching the waste management problem for the past two months and have now obtained a broad overview of the problem space. In this first blog post, we will try to fill you in on the research that we have done concerning the waste management in Bangalore.

Our initial research showed that previously, the BMMP took a centralized approach to waste management. This basically means that the BBMP was responsible for the picking up of the waste as well as for the disposal of it. This disposal should have been done in a environmental-friendly and sustainable way. Instead, most of the waste produced ended up in one of the landfills on the outskirts of Bangalore.

After further research and in-depth conversations with Nalini Sekar from Hasirudala, we found that the city is gradually moving towards a decentralized system of waste management. Bangalore is divided in to 198 wards. A ward is a subdivision of a large district, primarily created for administrative and political purposes. Today, waste is to be managed in each of these wards. This shift happened due to the implementation of a new law.

During 2012, various groups of civil society, activists, NGOs and concerned citizens came together and fought in High Court for the passing of a new law. This new law was named ‘The Integrated Solid Waste Management Policy’ and focused around decentralizing SWM (Solid Waste Management) in Bangalore. The law has two main objectives, namely the integration of the informal sector and building a decentralized infrastructure for waste management.

To understand how this decentralized infrastructure works, we started our field research to see what was happening with our own eyes. We visited three actors that influence this waste situation in Bangalore.

The first destination was Madiwala market, a traditional vegetable market in the city. After that, we followed the waste to two possible destinations: a composting center and a collection center of recyclable material. In the first one, Karnataka Composting Development Corporation (KCDC), we saw how their process is also non-sustainable. The majority of waste they receive was not segregated, leading to a lot of effort to segregate and finally create compost with wet waste. In the second place, a Dry Waste Collection Center (DWCC), we saw how recyclable material is processed, segregated and resold to recycling industries. On the video below you can see a portion of our field research:

Waste Wanderers from Fields of View on Vimeo.

In our next blog post we will tell you the inspiring story of John – a DWCC manager we met during our field research. We will also focus on the current status of the project.

Who do we call when waste collection system fails?
Linger’s initiative to recycle glass bottles
How to recycle envelopes
Don’t throw, get ready to reuse
Re-Used, Recycled, Saved!