Animals, including humans, are curious by nature. Science is what makes the curiosity of the human animal different from that of the others. It is the tool we have developed to explore the world to know more and answer deep and profound questions. This includes the brain asking, and answering, the question, “how does the brain work?”. This is uniquely human and makes humans human.

Throughout history, however, society has had a love-hate relationship with science. In this context, society includes the state, organized religion, politics, commerce, citizens, and even scientists themselves. The state has tried to suppress and discredit scientific ideas. Einstein’s theories were condemned as “Jewish” science by some, in his day. Religion has tried to suppress scientific ideas. Copernicus, Bruno, Galileo, and Darwin come to mind. Some ideas have been hijacked and false or wrong ideas have been promoted – like in the case of the Lysenko affair and Eugenics. The common citizen was shocked, rightly so, by the inhuman use of the atomic bomb and, unfortunately, sowed the seeds of doubt about scientists and even science itself. Finally, scientists themselves have questioned and resisted new theories – Einstein not being enthusiastic about the Quantum view of the world and stating, “God does not play dice”. Once sufficient evidence has been found, they have become a part of mainstream science.

Not very long ago, scientific progress came about through individual effort, often by people with personal means independent of royal patronage or the state. As scientific research has become more complex and the tools intricate, the days of individual scientists is almost over. Science is being done more and more with collaboration between scientists, institutes and even countries – as in the case of the European Organization for Nuclear Research (CERN – Conseil européen pour la recherche nucléaire).

All over the world, the state allocates money for scientific research and we, as citizens, must be aware of where the money is going. Ideally, we should have a say in the matter. For that to happen, we must know what is happening. Hence, science should be communicated and be accessible to the interested common citizen.

In many countries around the world, including scientifically and technologically advanced countries, there appears to be a widespread skepticism about science among the general populace. At the same time there is a great fascination with technology, and so called result oriented research has become fashionable. This shows lack of an understanding of the relationship between “pure” science and technology. This has resulted in a fall in funding for scientific research. We the citizens need be aware that our efforts in fundamental science is essential for our wellbeing and that of the coming generations and the progress of humanity. It is our duty to insist that science be adequately funded and also that it be effectively communicated. 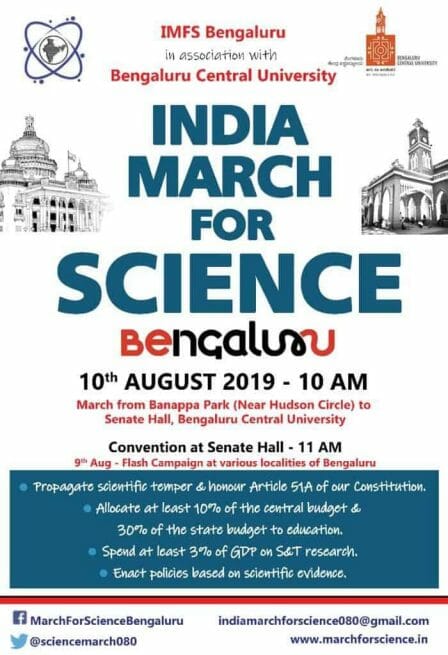 Decades of progress in science has improved our lives beyond what was imaginable a century ago. One of the hallmarks of this is the widespread use of communication technologies. Ironically, this very same technology has enabled the spreading of false stories, pseudo-science and non-science and downright superstitions. There are groups with narrow, short sighted, self-interest who deny global heating, against all scientific evidence that we are mindlessly heading towards an environmental catastrophe. A plethora of therapies of unproven efficacy and often harmful ones have sprung up, endangering human lives. Therefore, there is a need to counter such obscurantism and protect ourselves against it. The only way this can be achieved is by developing a scientific temper and critical thinking. They are characterised by a refusal to accept things at face value but unfailingly look for evidence.

These reasons have prompted a worldwide movement called March for Science. It calls for well-funded and widely communicated science. It aims to promote, encourage and enable everyone to develop a scientific temper. Marches are being held in nearly 75 cities and towns across the country.

In Bengaluru, the march is on the 10th of August while in the rest of the country it is on 9th August. Let us all participate in the march to do our bit to protect the present and safeguard the future generations.