Hello all! After a two-week hiatus, I’m finally back at the old stand and churning out blogs again. I’ve had my pre-board exams for the past two weeks, so between studying for them and wishing I didn’t have to, I’ve not had time for much else. However, the exams are finally over, so I can get back to blogging at regular intervals.

I’m sure many of you have been wondering what happened to the Thousand Smiling Faces project which I wrote about two weeks ago. 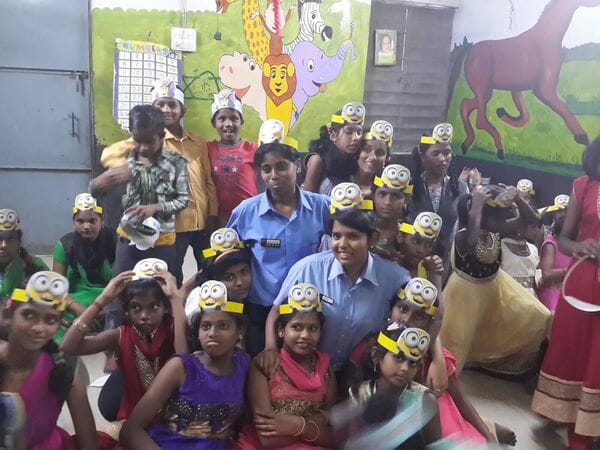 The happy children with their paper crowns. Pic: Ritvik Mandyam

I’m happy to report that the project was a success. We fed 1,085 children and raised ₹1,00,000. We even got pictures! You can see those at our Facebook page here. If you’re into that sort of thing, you can look at all the boring organizational details at my other blog here. If you’re young and hip, though, you can read about the technology that these residents of India’s IT capital used to make it work.

The first thing we had to do for the project was let each of the orphanages know what we planned to do. What better way to do that than using the erstwhile telephone? We made a Google Sheets chart of several orphanages and called each of them. Some of them had numbers which no longer worked. One of them was a number for an Arabic restaurant. The chap who picked that one up was pretty annoyed to learn that I was looking for an orphanage and not for some food, I can tell you that much. The great thing about Google Sheets is that it’s completely online – or, as we tech geeks call it, “in the cloud”. Basically, we could send everyone a link to the chart and any time we made an edit, everyone would automatically see the updated chart. No repeated emailing of MS-Excel charts for us, no siree! The only issue was that McDonald’s couldn’t use Google Sheets internally. They used only Excel. As a result, we had three separate Excel charts that McDonald’s emailed to us. Copying McDonald’s additions to our magically-auto-updating, futuristicky chart was no fun whatsoever.

After that, we used Milaap.org, an online fundraising platform, to raise the money. Milaap is incredibly good at what it does. The fact that we didn’t receive even a single call/e-mail about how to donate is, I think, evidence enough of how well it works. Thanks to Milaap, we could take donations as bank transfers, credit card payments or even as a cheque or cash pickup. After the project was over, they put the Thousand Smiling Faces project up as a successful fundraiser. My only problem with the Milaap guys was that they took, like, 8% as commission, the infernal crooks! No, I’m just kidding. I’m sure it’s extremely difficult to stay solvent when your whole business is built around charities.

The next big challenge was to set up the timings and so on with McDonald’s. This we did via email and phone calls. The McDonald’s guys, by the way, were incredibly nice and did a fantastic job of coordinating the delivery – and no, McDonald’s has not promised me a lifetime supply of free burgers for saying that. They even put up with changes of quantity to be delivered and with orphanages dropping out about four hours before the delivery was to happen. Another of the great things about McDonald’s was that they had enough outlets to actually coordinate the delivery. Despite all that, though, a few deliveries didn’t happen quite on time. We resolved that by calling McDonald’s and nagging them at approximately two-minute intervals until the burgers got to the orphanage in question.

Coordinating the volunteers was a big challenge, too. We needed to be in constant contact with each other, even when the delivery was happening. We had to be able to give people directions while they were actually en route to the orphanage. Considering there were 12 individual volunteers, this was quite a task – dealing with twelve different phone calls almost simultaneously is pretty difficult. SMSes were out – we couldn’t talk to all the volunteers at once over SMS messages. We’d have to send each message to each volunteer individually. The trouble was, we were far too lazy to send 12 separate SMSes. The solution we used was a WhatsApp group. We added all the volunteers to the group and discussed everything there. Calls were only to be made if absolutely necessary.

Ultimately, though, the project went off fantastically well. We got our burgers through to the kids. McDonald’s quite surpassed itself. Where we had asked for a burger, fries and iced tea, McDonald’s turned up with all that plus balloons, colouring books and paper crowns. The other important thing, I think, is that the volunteers enjoyed it. It’s important because next time we do something like this, we know just whom to call – and also who’ll tell us to go away and leave them in peace.

Will you help me bring smiles to a thousand faces?