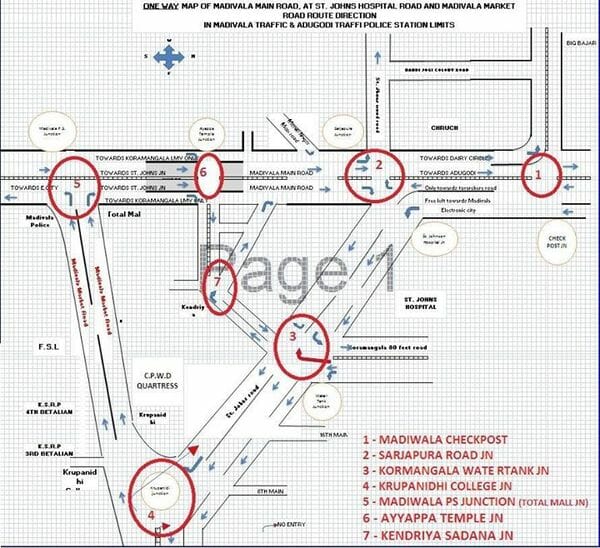 The new one-way system around Madiwala market introduced by the traffic police in response to the growing challenges of mobility in the area shows how, when we don’t have a macro plan, we end up making a series of small adjustments, maybe out of necessity, but not always connected to each other. Here is the link to the image showing the new plan.

Traffic rearrangement at Adugodi and Madiwala

Bengaluru traffic police have introduced a one-way system in Madiwala and Adugodi traffic station limits to avoid the traffic congestion and to pave way for the smooth flow of traffic. The system has been implemented on a pilot basis with effect from April 26th 2015.

(a) The underpass at Ayyappa Temple junction, which was built at some cost, is actually not necessary now, since there is no intersecting traffic at this location anymore.

(b) The bus bays built on the east side of Hosur Main Road are also not necessary, since south-bound flow of vehicles is now blocked. Likewise with the north-bound service road, which probably turns into an informal parking zone. So also with bus shelters along the north-bound direction on Sarjapur Road.

(c) Vehicular movement will be speeded up by this arrangement, no doubt, but pedestrian movement could be impeded, because of higher speeds of vehicles. We’re seeing some of this in the Whitefield experiment too.

(d) The market itself may become less accessible to its largest base of customers—those who come on foot from the western side.

There is tremendous pressure on the police to do ‘something’ in such local areas, but sadly, it is not they who can fix these problems. The ‘flow management’ solutions are actually band-aid at best, and we may soon discover this. My guess is that a new set of challenges will emerge around the Water Tank junction. But there is no point blaming traffic police for work that BDA, BBMP and BMLTA should have done, to prevent this situation from coming up in the first place.

At the planning level, we need to do two things – create a primary arterial network for radian and circumferential movement, and separate movement on this network from neighbourhood-level (i.e. grade-level) movement. Unfortunately, the proposals of the Decongestion Committee to address the key choke points in the city (at Silk Board, Ecospace, KR Puram, Marathahalli, etc) along these lines were left out of the budgetary allocations for the city.

Having missed that bus, we are now making the bus bays too unusable, among other things! Wait for the Metro next at Silk Board, and the BRT that originates there – more ad hoc’ism awaits us with each new ‘development’.