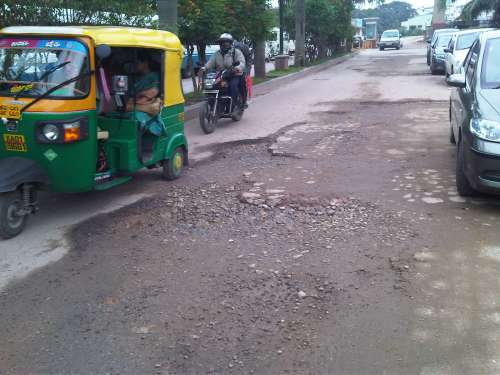 Keeping the roads free of potholes is quite simple. Everywhere in the world, cities do this all the time. How? By doing three or four key things.

First, they build roads of high quality. We build roads of low quality thinking that they are cheaper. But that’s actually not true. They keep crumbling in the rains, and we keep rebuilding them, and as a result the expenditure on the roads is actually higher in the long run. It is better to build roads once, at higher cost and quality.

Look at Vittal Mallya Road – it has remained in good condition for the last five years with no maintenance, while many nearby roads have been paved repeatedly. Also look at the national and state highways, which also last much longer, for the same reason.

BBMP is starting to build some high quality roads under the Tender SURE program, but these are the exception. Ideally, every road should be of a high standard, not just the 40 or 50 chosen by the government. In fact, even right next to some of the Tender SURE roads, BBMP is building terrible roads, as though there is no lesson to be learned from the experience gained through Tender SURE.

Second, in most cities around the world, the local government has a small amount of internal capacity too, i.e. they don’t outsource all 100% of their engineering work. About 10% is kept in-house. This means that they have a budget for some materials, a few road rollers and JCBs, and a bunch of other things.

As a result, as and when potholes form, these in-house assets are used to fill them quickly. Particularly on the major roads, this is important. They carry lots of traffic, and we want people to use these major roads instead of driving through residential streets. However, if we don’t keep the major roads in good order, the public will not think of these as ‘major’ roads.

Even without in-house assets, potholes can be tackled swiftly. What we need for this is a forward-contracting system. For a few months before the last BBMP Council was formed in 2010, we had this. The Karnataka Land Army was given a city-wide contract to fill all potholes, and Rs 5 crores was given to them up-front. As and when they did any filling work, they would get it certified by the local ward engineer and the local traffic sub-inspector, and the amount would be debited from the kitty. Whenever the money ran down, it was topped up.

Without in-house assets or such a forward contract, we have to wait for lots of potholes to form first, and then call for bids from contractors to deal with them. All of that causes delay, and meanwhile the public suffers.

Why was this system ended? Simple. Once the council was formed, BBMP corporators argued that pothole filling is ‘trivial work’ that can be performed by ‘anyone’, and that there was no need for a large city-wide contract to do this job. Instead, they said, the job should be given to local contractors overseen by the corporators. Translation – the job needs to be given to someone ‘known’ to them.

Hale kallu, hosa billu. This has become an annual ritual at BBMP. All the solutions given here are well known to the council and to the administration. The reason they are not adopted is well known to the public – money.

Spending money again and again, needlessly, allows more money to be siphoned. It is this loot which is at the heart of the problem. So, the next time the government or the BBMP tells us that potholes will be fixed within 30 days or 60 days, keep this in mind – that is the surest way to ensure that there will be new potholes again in 60 more days.

Instead, what we should insist on is roads on which potholes don’t form in the first place.