In November 2015, Indirangar residents had taken to streets against the plans to convert a playground into a cricket pitch. Now there’s a plan for the same ground to be converted into an indoor stadium. Indiranagar residents have come together to oppose this move, citing lack of open spaces. An open letter from I Change Indiranagar team says:

The decline of per capita availability of open space in Bengaluru has reduced from around 8 sq m in 1972 to 2.82 sq m in 2003. The latest data now shows that this has further declined to around 1.9 sqm in 2015.

A study conducted by the Indian Institute of Science, Bangalore notes that the Bangalore city lost much of its open spaces and urban wetlands due to urban sprawl resulting in over 35% decline in number of water bodies between 1973 and 1996.

The latest announcement by the Minister for Bangalore Development K J George is a shock to the community of residents of Indiranagar 1st and 2nd stage – the only open public playground in the area will be converted into an indoor stadium and offices for BMRCL!

This is an open playground which facilitates playing of all varieties of sport including Basketball. It serves neighbourhood schools and children of the area including Binnamangala slum.

BMRCL have already acquired plenty of land for the Metro project and must construct their offices at Byappanahalli where they already own sufficient land. 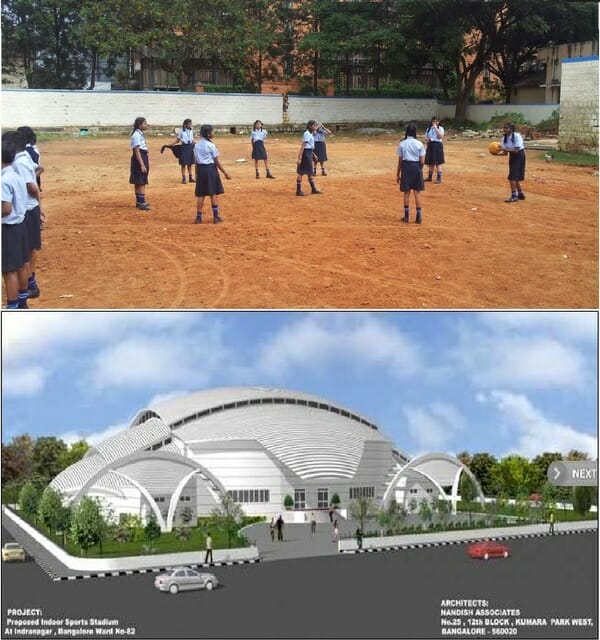 The existing playground, and a graphic representation of the planned stadium.

Past experience has proved that indoor stadiums have rarely been used for the purpose they have been built-often lying unused and, when utilised, for purposes other than sport. Like exhibitions and convention centres for Comic Con and the likes.

The adjoining roads are too narrow to sustain any further growth. Residential areas across this city are already overburdened by rampant illegal commercialisation violating zoning regulations and the High Court of Karnataka orders.

We the Citizens of Bengaluru demand that our voice be heard and we are shouting out loud: “Save our open spaces – let our children play safely on the ground, not pushed on to the streets, let our elders have a daily meeting spot safe from traffic, let our citizens have a place to meet and celebrate a festival or play a friendly game of cricket or football or whatever – it’s our neighbourhood and we will fight for it!’

There is an urgent need to integrate open space planning in urban development based on international guidelines for parameters such as accessibility and availability per capita.

And now Dear Minister, please let us know how you will increase our open spaces – why don’t you announce that the Indiranagar BDA complex will be converted into a park? Let’s create a Lalbagh in Indiranagar!

Letters have been written from all the Residents Welfare Associations in Indiranagar 1st & the 2nd Stage to K J George. There is also a Government Order stating that due to resistance from the local residents, the indoor stadium plan has been abandoned dated 25th Feb 2016. 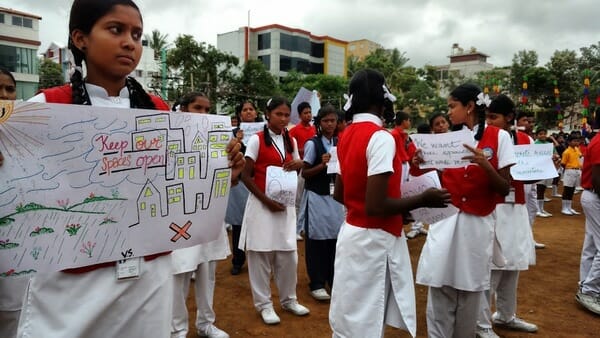 Students protesting in Indiranagar, against the conversion of playground into indoor stadium. Pic:I Change Indiranagar team

I Change Indiranagar wishes to bring to light the following facts:

1. According to the Revised Master Plan 2015, uses for open spaces permissible include: Sports grounds, stadium, playgrounds, parks, swimming pools, cemeteries, garden land and crematoria. Uses permissible under special circumstances by the authority: Open air theatres, indoor recreational uses, dwelling for watch and ward, sports clubs, libraries, milk booths, HOPCOMS, the area of such use shall not exceed 5% of the total area and shall not be more than G+1 floor in any case.

This playground already has offices of the BBMP AEE, Medical Officer of Health, HOPCOMS,  Nandini milk booth, library and corporator’s office within the playground.

This already EXCEEDS the 5% rule.

The Revised Master Plan 2015 also classifies the area around this as “Residential Main”, and with roads surrounding the playground less than 40 feet, no commercial activity to be allowed.

The adjoining roads are already congested and cannot take the burden of additional traffic.