Residents Welfare Associations across Indira Nagar have been working towards getting rid of the commercial enterprises in the residential streets of their neighbourhood. Members of the RWAs in Indira Nagar 1st Stage and 2nd Stage had filed RTIs last year to figure out if the commercial establishments in their neighbourhood had a valid trade licence, as the Karnataka High Court order states that:

“The BBMP shall not permit or grant any change of land usage in the following areas: Malleswaram, Richmond Town, Vasanthnagar, Jayanagar, Vijayanagar, Vishweshwarapuram, Rajajinagar and RT Nagar. In addition thereto, residential areas mentioned and shown in CDP 1995, regardless of whether they are subsequently depicted as residential main or residential mixed, are also included. This order shall also apply to other residential areas regardless of the nomenclature used in the revised master plan of 2015. Any building plan that has been sanctioned trade licence or change of land user allowed subsequent to the order dated January 25, 2012 shall be recalled.” 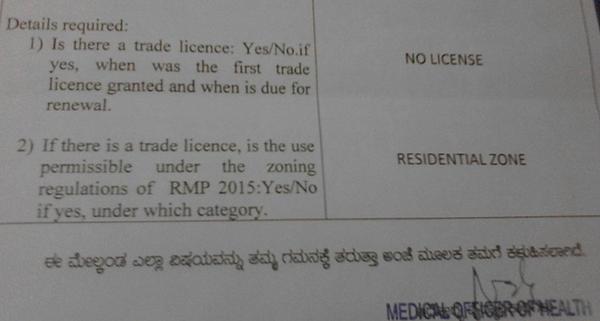 The response to the RTI inquiry. Pic: Praveen S

The RTI response revealed that 99% of them did not have trade license and none of them had effected change of land use. All the streets in question are classified ‘residential’ as per RMP 2015 and as per the erstwhile CDP 1994. None of the streets are above 40 feet in width. Around 84 commercial establishments were identified in the residential main streets.

By its acts of omission, BBMP is sabotaging the PIL judgment. They do not give permissions or trade licences or take cognizance of violations to turn a blind eye, leading to contempt of court.

The RWAs in Indira Nagar met in end-January 2016 to take a call on further action if BBMP does not act against the identified commercial establishments.

The residents are now waiting for the BBMP to act against the identified commercial establishments.