The empty plot became a garbage dump over the years. Pic: Praveen S

During the end of November 2015, when the corporator and the ward engineer began cleaning up an vacant plot (plot number 60) located at the intersection of 4th cross-10th A Main in Indira Nagar 2nd Stage (Ward 80), close to the Indiranagar metro station, residents’ joy knew no bounds thinking that the garbage mess piled up over the years would finally be cleared from the vacant plot. What actually happened has instead left the residents frustrated.

The corporator and the ward engineer, instead of clearing up the garbage, have made a huge pile of the garbage dump and have left it as it is on the vacant plot. For days they claimed that it would be cleared soon after they found a truck to dispose of it. Days turned into weeks and weeks into months! 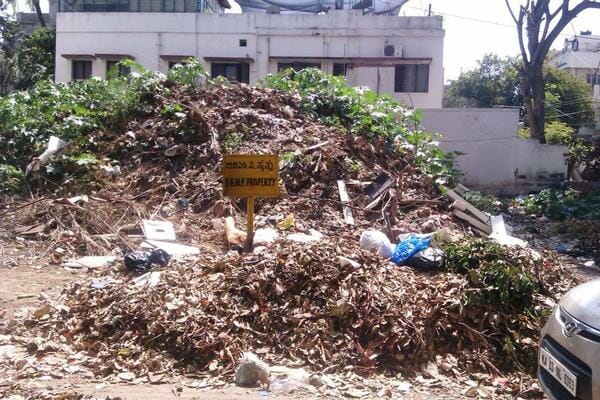 While BBMP has piled up the garbage into one big heap, it is yet to be cleared. Pic: I Change Indira Nagar

The pile stands as it was left and growing every day for over three months now. Plants have started growing in the heap of trash. On questioning the ward engineer and the corporator, they claim that it would cost them Rs 50,000 rupees to clear the garbage from the vacant plot. The ward engineer even requested the RWA to sponsor the amount and said he could get the garbage removed. On questioning them about why BBMP was not penalising the plot owner and claiming the money from him, the ward engineer claimed that the repeated notices served to the owner only found their way back to the office.

The garbage pile is much bigger now and commercial establishments and residents from other parts of Indira Nagar still continue to dump their garbage here during early hours of the morning or late nights. The residents are only lucky that it is not been set on fire… yet.

CM George, a resident in the neighbourhood, continues to run from pillar to post to get plot number 60 cleaned.

An idle plot is the devil’s dump yard!