Civic sense? What on earth is that?

Vacant plots in our city are considered as nothing but garbage dump yards.  And if they are under litigation, they are ignored by the concerned parties for obvious reasons. The civic authorities don’t seem to care, and irresponsible citizens and commercial establishments like hotels and pubs begin disposing their waste in these sites in the wee hours of the night or early mornings; sometimes even in broad daylight.

This empty plot has become a garbage dump over the years. Pic: Praveen S

Despite the BBMP claiming that they will penalise the site owners for not taking care of such vacant plots, it does not seem like they are doing anything about it.

Plot number 60 located at the 4th cross – 10th A Main intersection, closer to the Indiranagar metro station has been lying vacant for over 50 years now. In the last few years, it has turned into a garbage dump and is being abused by irresponsible residents in the neighbourhood, including few restaurants and commercial establishments. Over the years, residents in the area have complained about the uncleared garbage in the plot, and the possibility of contracting dengue or skin disorders. However, in the last one month, the pile has only been increasing.

A recent letter to the Mayor from residents in the area. Pic: Praveen S

CM George, a resident of the area who lives near the plot, has spent many sleepless nights, guarding it to catch the offenders red-handed. His repeated efforts to bring the attention of various officials, MLAs, corporators, health inspectors, and Assistant Executive Engineers of the ward have been futile.

Letters with the signatures of many residents have been sent to various civic authorities. Reports about the garbage on this plot have been published in various Kannada and English newspapers several times as well. And the impact? Absolutely nothing! 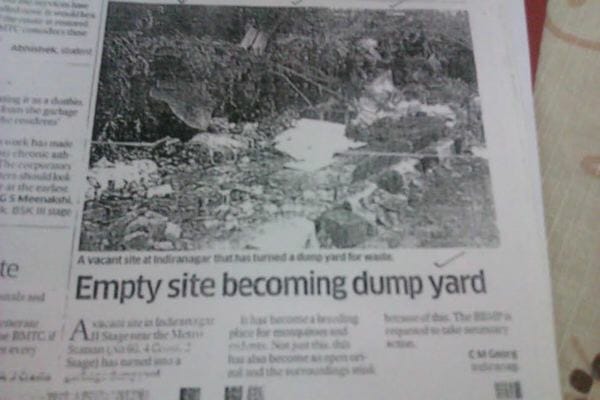 Sometime in 2012, a fire broke out on this plot in the dead of the night. It spread rapidly due to the garbage. However, the cause of the fire is still unknown. Thanks to the alert residents, it was doused immediately with the help of the police and fire personnel. There is a good chance this can happen again. 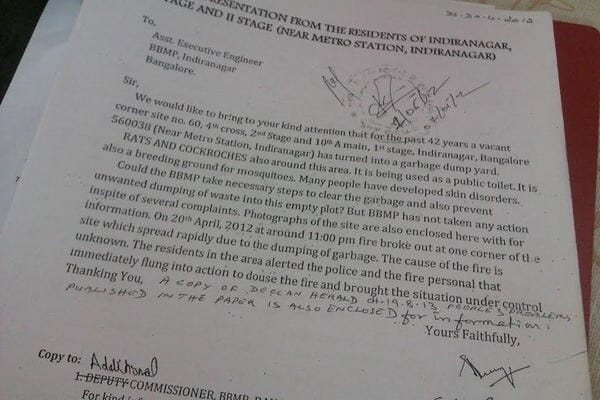 A letter to the authorities from April 2012, reporting the fire. Pic: Praveen S

It has been over a month since the new health inspector of Ward 80, Thimme Gowda took charge. At the time, he promised to get the plot cleaned, and get the ward engineer to build a wall around it. However, repeated calls to him are yet to yield any results. In his defense, he says he is helpless as the whole city is filled with garbage and he would need more time to sort out this issue.

Recently, even the BBMP pourakarmikas have started dumping the waste collected from households in the neighbourhood in the plot. Responsible residents, time and again, keep alerting the BBMP and the health inspector to keep the pressure on.

Post the monsoon rains, the residents requested that they fumigate or power spray the neighbourhood to tackle the mosquito menace. However, the BBMP sent a puny man on a bicycle with a hand pump to spray mosquito repellent!

(With inputs from CM George, a resident of 4th Cross)