Hence if the total inflows in Karnataka was 100TMC, Karnataka can keep 58.44 TMC and send to TN 41.56TMC. Hence one would not need to base it on the % rainfall deficit/surplus – but on actual inflows. The inflows can be measured on a daily basis, the corresponding keep and give numbers calculated and released at some predetermined/useful frequency. It seems fair? And simple?
Now the inflows to/from all reservoirs are known, the additional inflow from 22,000 sqm at Biligundlu is also known. This should make the actual sharing numbers even in a deficit year – a reasonable and clear calculation.
Thanks to zenrainman’s FB post on the same topic for a slightly more elaborate description. And if you ask whats TMC ? That for another post 🙂 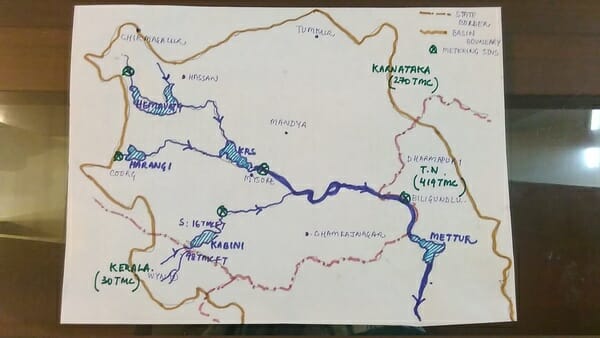 The flow of the Kaveri till she reaches Mettur

The flow of the Kaveri till she reaches Mettur