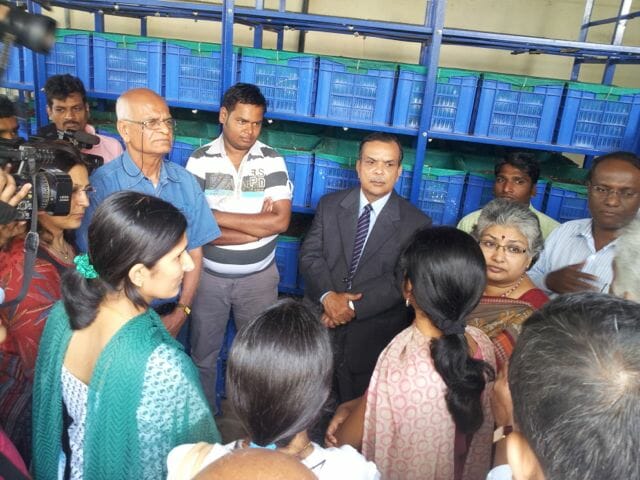 This visit was related to the SWM PIL currently underway, so the learned judges could understand the situation on the ground and get a sense of how quite a few communities are committed to segregation and better waste management.

The problem of how to dispose our waste in the right manner is something that all of us in the Solid waste management team have been obsessed with for a long time now. With the BBMP going back and forth on waste collection from apartments, most apartments were hiring private vendors who would pick up mixed waste and dump it further down the road, or worse still into an unguarded lake.

There were however, several RWAs who were keen on changing this state of affairs. For the past few years, inspired by many pioneers like N S Ramakanth and others from the SWMRT group, many of us residents of ward 150 have been practicing garbage segregation at source at an apartment level. We have managed to reduce the garbage going to landfill significantly by segregating the recyclables at the least.

Now, with the High Court order that enforces segregation at source, it has only made our initiative more easier and has put a complete positive spin on all the citizens and we have managed to come together to take the apartment level SWM solutions to the ward level.

Over a period of 6 months, with the help of BBMP, we teamed up with Karnataka State Composting Corporation (KCDC) and Hasiru Dala, an NGO. We now send our wet waste, approximately 1 ton per day, to KCDC on a daily basis and the recyclables are sent to authorized recyclers.

As per the pilot project envisaged, the reject/sanitary waste would be either transported to Mandur or handed over to Maridi, the medical waste vendor for incineration.

The price structure was also worked out in such a way that reject waste was the most expensive, thereby encouraging people to dump less into that category. Four apartment complexes initially signed up for the pilot project – Springfields, Raindrops, Ozone Residenza and SJR Verity – a total of 1100 apartments. Two villages have also been included in the pilot and volunteers are working to spread awareness on segregation at source. Going forward, this process is expected to be rolled out across the ward. Now more apartments are joining. Some are managing with in-house Organic Waste Convertors (OWC).

Three months into the process, the system is working pretty well after some initial hiccups. As per the JC’s order, KCDC started accepting the wet waste, with the caveat that more than 15% of mixed waste would not be tolerated. The system of dry waste collection through approved ragpickers continues to work efficiently, making a significant difference in their lives too.

Maridi has not yet come on board to take the sanitary waste, therefore as of now this will go to the landfill in Mandur. Still, on the whole, we have the satisfaction that we have greatly reduced our reject waste and that the little that is being generated is going through the appropriate channels.

To take this fledgling success story forward however, we need more people to sign up for this venture.

While citizens are committed, the biggest challenge is the lack of infrastructure and not having a consistent process. We will segregate at source and then want the system to take care of the rest.

The following issues need to be resolved, to scale this initiative and take it to its full potential.

Without these issues getting resolved, contractors often end up dumping the garbage at nearby lakes or burning them at deserted areas. This demotivates the segregation efforts of the citizens.