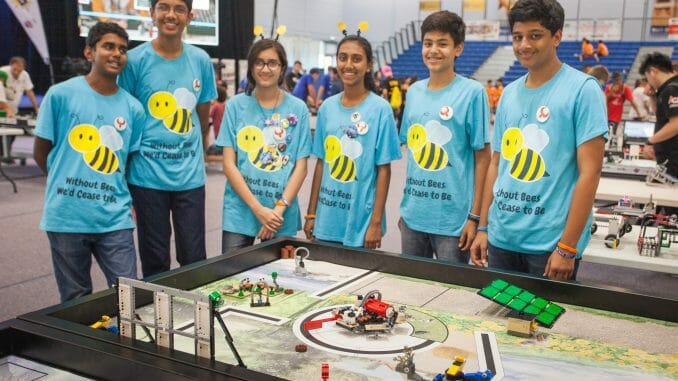 Flaming Phoenix has been competing for last 3 years in this competition. In the first 2 years, it reached the national level. This year, we qualified for the international FLL competition held in Bath, UK, after advancing though the regional and national level competition.

The event encompassed more than 36 different countries, with over 94 individual teams. The team achieved 2nd place in the robot game and 2nd place for our project presentation as well.

For the project, we chose bees as their allies because of their importance (they pollinate 80% of our food crops) in our lives. We also used technology (sensors in the beebox for bee count and temperature control) to create an innovative solution to help beekeepers take care of their bees. These Beekeepers use beeboxes to pollinate farmlands and only use excess honey and bee pollen that the bees get for sale. Our team also created a short skit to present our topic to the judges, in which they depicted life in 2067 without bees . This was well received and won us the runner up position.

We have done a lot work to raise awareness, publishing articles  and videos.

Published on behalf of Ratan Shankar