This fortnightly newsletter is shared by the citizen group bellandur-forum@googlegroups.com

Ibblur lake revival back on track

The Bangalore Urban district office, headed by the Tahasildar (South) conducted an eviction drive from March 04 to March 05 to clear encroachments on government land around the Ibblur Lake, as per the latest survey map.
Some under construction buildings and portions of existing commercial buildings, parts of boundary walls of residential complexes (Sobha Garnet & Suncity) etc. were demolished as part of the drive to reclaim Lake land after due notifications were given to the concerned parties. The BDA has committed to resume fencing of the true lake area periphery which is a critical step to revive the stalled work on restoration of Ibblur Lake.

BIOME and WIPRO jointly organized a Rainwater Harvesting Mela on 22nd March 2014 (World Water Day) on the WIPRO premises on Sarjapura Road which was a FREE and OPEN-FOR-ALL event from 10:30am to 2:30pm. The event included a photography exhibition ” Namma Ooru Namma Neeru” put together by the Goethe Institute.
Information stalls put up by varied RWH Service providers – like Terragreen, Muniyappa the well digger, GreenZone and Rainway Filters attracted interest from people who were looking for help to put together a rainwater harvesting system for their own homes/apartments and offices. Water Metering and Waste Water Treatment technologies were also highlighted at the Mela. REVA College and NIE Mysore also participated in the Mela both by putting up stalls as well as engaging with the speakers. The speakers included Krishna who spoke about the efforts to revive Halanayakanalli Kere and Mr KP Singh who spoke about the 300+ Recharge Wells and community participation in Rainbow Drive. An aquifer mapping project around Sarjapura Road/Bellandur area was also launched as a part of this Mela. Several people from the local community acknowledged the relevance of this project and signed up as volunteers to help with providing further data. Article courtesy – Shubha Ramachandran

On Sunday March 23rd, nearly 1500 residents of Koramangala, Bellandur and HSR layout participated in a protest against the massive mixed use projects coming up on a 100 acre parcel on Bellandur wetlands. Questions were raised about the reckless manner in which various government departments have cleared the projects despite glaring violations.
Citizens are concerned that these projects will lead to drying up of Bellandur lake. The alteration to these sensitive wetlands and natural flood plains of Bellandur lake due to these mega projects is a real threat of flooding in Koramangala and HSR areas during rains. There are also concerns about the projected traffic of 21000 cars per hour added on the existing narrow approach road. Citizens demand cancellation of KIADB permits given to the projects and withdrawal of BWSSB No-Objection certificate given to the parties. Technical reports by LDA, IISc and MoEF have recommended cancellation of these projects. 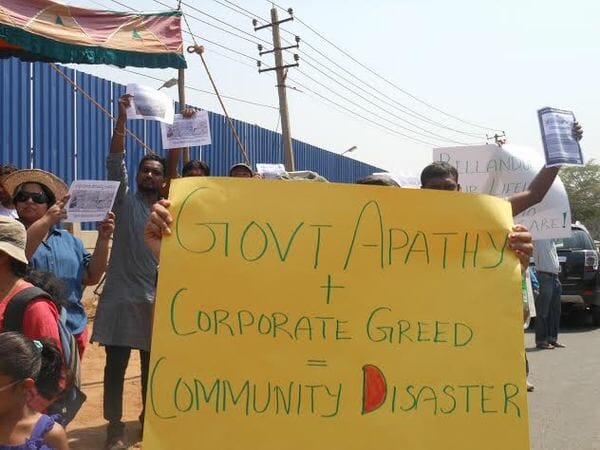 Save water this summer!

– Save the water after you boil eggs. Cool and pour for your houseplants. The nutrients released from the shell are good for the plants.
– Fill the reject RO water in buckets and use for mopping floors/cleaning bathrooms.