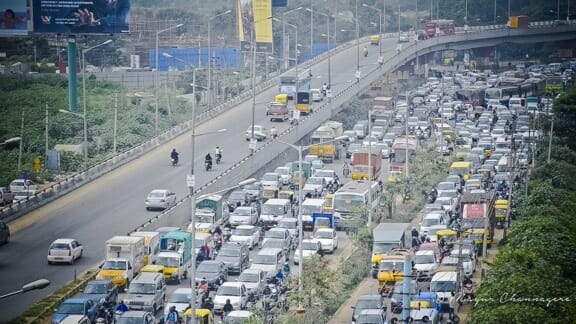 The ORR stretch from Ibblur to Marathahalli is home to Ecospace, Embassy Tech Village, Prestige Tech park and Cessna Business Park. In addition we have a world class hospital, scores of commercial buildings, offices and approximately 50,000 residential units (and still growing). Several lakh square feet of space, both residential and commercial, is under construction.

The Sarjapur road, adjoining ORR, houses Wipro corporate office – currently 10,000 employees. A new Techpark sprawling on 65 acres is coming up in Carmelaram, near Decathlon Sarjapur road. Many more residential units dot the scape from ibblur junction to Sarjapura. Haralur road, Hosa road and adjoining areas have apartments with thousands of flats and thousands more under construction. Sarjapura road and Varthur road connected by SH-35 also are home to around 30+ schools.

Lakhs of people live here, and lakhs more come to work. There has been 400% growth in the number of households in the last 10 years.

Despite this, the state of Sarjapura Road and Outer Ring Road has remained the same. All this activity in the Sarjapur ORR corridor has put tremendous stress on the resources affecting quality of life of residents and commuters alike. All these roads have not been widened or improved since Bellandur and Devarabisanahalli flyovers were built more than 5 years ago. Since then, the traffic has increased manifold. Sarjapura road widening is a project pending since last 10 years.

Traffic snarls on Outer Ring Road, Sarjapura Road and surrounding areas are a daily affair now. There is no place to walk, let alone drive. Drains are open or overflow with sewage.

This has seriously deteriorated mobility and have adversely affected commute time for both employees of the numerous companies and the daily wage workers who can least afford it. All residents rich and poor in this area are suffering due to rise in pollution, overcrowding and traffic congestion. Children are frequently stuck in jams and return home tired. It is scary to think the effect the pollution has on their growing bodies. Cases of asthma and allergic cough are quite common.

ORR companies contributed about Rs 100 Cr property tax last year to the state govt. But there has been spends worth only Rs 5 Cr in the last few years. As one of the highest tax payer constituency in Bangalore, we are furious with this poor report card. We should hold our elected officials such as the corporator and the MLA responsible. We deserve to have better quality of life and better infrastructure in the near future.

Fed up citizens demand an end to worsening roads and daily mind numbing traffic. The petition to Bangalore development and town planning Minister, Mr. K. J. George, is now nearing 5000 signatures in less than a week of being started. Our demands are the following:

– Release the DPR (Detailed Project Report) for Sarjapur road widening and collaborate with the above committee with detailed timelines. This road widening has been approved in Karnataka Govt. Budget
– Identify alternate routes, acquire additional land for roads, widen the narrow routes to reduce load on arterial roads and implement new roads as per CDP 2015.
– Plan for mass transit in this corridor such as BRTS, Mono-rail or Metro, as feasible

We residents and employees working in the neighbourhood are gathering on 18th December, 12 pm to 2 pm, and peacefully demonstrating to highlight our problems to the civic authorities. Four sets of citizen groups will be present at different venues between 12pm-2pm and will walk towards Iblur Junction to get together and announce our next steps. The venues are Cessna Business Park on ORR, Ecospace on ORR, Ibblur junction and Wipro office in Kanneli on Srjapura road. For more information, follow the facebook event “Fix ORR-Sarjapur Road”, #FixMyRoad, #ORRSarjapurRising and the twitter handles @FixRoad and @orrsarjapur.

Bellandur Forum is a group of citizens and RWAs active in neighbourhood civic issues like lakes, solid waste management, roads etc. They have come together with a large number of lay citizens, residing and/or employed in the neighbourhood under the umbrella ORR Sarjapur Rising – to highlight the deteriorating road and traffic conditions. We are also trying to work with the traffic police and authorities to find solutions.

On behalf of Bellandur Forum and ORR Sarjapur Rising