This fortnightly newletter is published by the citizen group bellandur.forum@googlegroups.com

Sri Ramalinga Reddy, the Minister in charge of Bangalore visited the neighborhood on Monday morning. A group of residents met him on Monday morning at 8 am at Kaikondrahalli Lake. He was accompanied by several BBMP officials. SWM Special Commissioner Darpan Jain also dropped in a little later. The following topics were discussed:

Lake – Joint commisioner to get Kaikondrahalli lake boundary surveyed by Tahsildar within 1 week and issue notices for encroachments. He will also take immediate action on buffer zone violators.

SWM- A proper transit point for waste on Sarjapur Road to be set up. BBMP to raise awareness about segregation in all neighborhoods – all BBMP trucks to display info banners and use speakers.

Roads – Traffic management on Outer ring road, sevice roads and other junctions were discussed in detail.

There are groups of residents following up on each of these tasks. To join a particular group please write on the group email.

With the help of BBMP, many residential associations of Kasavanahalli jointly organized a clean-up drive on Sunday, 14th December. Owing to the overwhelming response from the children living in the area, the region from Vridhavan Serenity to Ocenous Monarda is now clean and tidy. A black spot near Vrindavan Serenity was cleaned and transformed into a beautiful spot. An educational drive for shoppers received an equally overwhelming response. The BBMP guidelines on waste management was discussed with shoppers, and they assured adherence to it.  The mammoth effort was supported by almost 80 residents, along with pourakarmikas. It was clear from the activity that the residents have a great sense of social commitment. 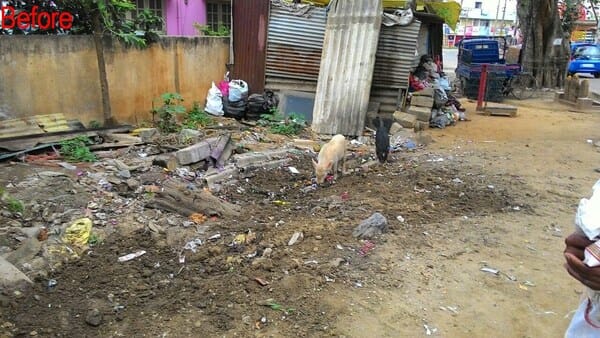 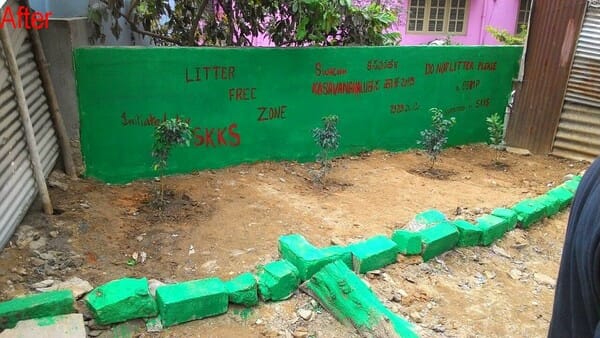 Black spot transformed in a couple of hours by the residents.

However, there are some unfinished tasks, which requires help from BBMP, like clearing construction debris dumped along the road-side and road encroachment. The clean-up drive will be continued on the 20th of December, hopefully with a bigger team.

The Rotary Club, Bangalore, Lakeside, (RCBL) has decided to conduct a series of programs in the neighborhood as part of the nationwide Swachh Bharat campaign. It has adopted the Iblur Park through MoU with BBMP. This park is located off Sarjapur signal junction, opposite Sobha Garnet/Sun City. Plans of the club to maintain and beautify the park include plans to recruit gardener, get more children’s play equipment, benches, organic composting, a good toilet and regular cleaning.

On 23rd November 2014, Rotarians and their families got together to beautify Iblur park. They, along with some of the general public, spent the entire morning under the hot sun, cleaning and painting Iblur Park. The participants re-painted the benches, the walkway curbs and the trees to avoid termites, discarded the dead plants and trees, and swept the entire park.

Few residents came forward to sponsor benches, pay for the gardeners and extend other forms of support. This is gratefully acknowledged.  Readers are requested to visit the park and contribute ideas and time towards improvement in park and participate in future programs. Please contact Mr. Ashok Dubey (9945070046) or email at thedubefamily@yahoo.co.in

The school next to Kaikondrahalli lake has dug multiple deep bore-wells over the past several years, all of them deeper than 800ft, and found little or no water, despite the lake being healthy and full of water. The school has been unable to keep toilets clean due to lack of water. Recently, however, the school, which is located near the Kaiknodanahalli Lake decided to dig a shallow well of about 20ft depth near the lake. After the well was dug, it rapidly filled up, and water is available 8ft underground even in december. A pipeline has been laid from the well to the school. It is clear that the water is of sufficient quality to be used for sanitary purposes. This is a great example of groundwater knowledge being used to find a simple solution to a water problem.  Update by: Subha Ramachandran. Read more.

Kaikondrahalli Lake has been chosen to launch Namma Bengaluru Foundation’s Lake Day Series. The series aims at raising awareness, increasing community participation and fostering an appreciation of lakes in Bangalore.

At the Kere Habba, we will make an effort to connect with our lake, our neighbours and issues and ideas that are inspiring in the field of conservation. The nearly 2KM walkway of the lake will feature various stations where informative green workshops, story-telling sessions, bird walks, music that draws inspiration from nature, innovative experiment-based science activities,  terrace gardening techniques, etc., will be showcased. We will share a detailed schedule of events in a few days and put it up on the lake’s facebook page.

Author’s note: This article is co-edited by Ritesh Chitalia.