This fornightly newsletter is published by the citizen group bellandur-forum@googlegroups.com

Champion in Me Run

5k Run/Walk will be held at the Sneha Care Home to support the residential care facility for economically backward children living with HIV who have lost one or both parents. The event will be environment-friendly and will feature limited use of paper and plastic. Breakfast will be served after the marathon. For more information, go to: http://championinme.snehacarehome.org/

This is a drive by Rotary Bangalore Lakeside. RSVP to haricha@gmail.com to help organizers plan better.

Our waste, our backyard.

As the December 1 deadline is nearing for closure of Mandur landfill, the BBMP is gearing up to get the city’s waste handled professionally. This is the list of vendors empanelled by the BBMP for waste management in the city. It is disturbing to note that some of the waste will be processed on the outskirts of Sarjapura Road. Going by the worrisome track record of BBMP with Mandur and Mavallipura, we surely have something to fear about the possibility of our green picturesque outskirts becoming a toxic wasteland. Can citizen awareness and proactive involvement help in ensuring that only segregated waste is processed in scientific manner at these locations? We hope that the listed vendors will have the right infrastructure in place before starting operations.

In the month of October, the last section of the fencing of the inner lake area around the bend from ORR service road (near Cafe Coffee Day) was finally fenced by officials of the BDA. A separate pedestrian gate was installed on the section facing the back side of Sobha Hibiscus near ORR Service. Last month, an alleged land-encroacher built a concrete compound wall to reclaim the same land that had freed by officials of the Bangalore South taluk office in March, 2014. However, after protests by the neighboring residents, the Lokayuktha office intervened and a warning was handed to the above party.

On the water purification front, the BWSSB initiated a proposal to construct an STP plant at a cost of seven crores. It applied for funding to the state government, as well as for a land transfer from the BDA. Now with the entire lake area protected, the local BJP Corporator Smt. Latha Murthy and BBMP officials are cleaning up a strip of land so that trees can be planted there.

In order to protect Ibblur Lake, as residents of the area, you could:

– Stay vigilant and report any untoward events in the vicinity of the lake.

– Reach out to your contacts/ friends/organizations for funding and CSR support.

A cleanliness drive was held on 2nd and 9th November in KPCL Layout. Participants included an equal mix of youngsters and senior citizens. The gathering was addressed by Mr.Subramaniam and Mr Ananth. The overwhelming enthusiasm, dedication and love for the neighborhood was evident. The street was flooded with people carrying sacks and brooms in their gloved hands. A couple of hours after the activists began, every bit of garbage had been removed from the streets.

The event concluded at around 9.30 am, and the participants dispersed with a strong sense of achievement in having created awareness, and being bound together by a common cause – To clean the surrounding areas. Impressed by the work and the enthusiasm, the BBMP is joining the activists of KPCL Layout in making KPCL and neighboring areas garbage-free by establishing dry waste segregation and mini wet waste processing centers.

APR walkathon, an annual event, was held for the fourth consecutive year on Sunday, Nov 16th at Adarsh Palm Retreat (APR) campus in Devarabisanahalli. This was a community event and most particpants were the residents of APR. There were various categories from 2km walk upto half marathon (21km). The event flagged by Arjuna awardee, Reeth Abraham, raises funds for APR charitable trust. This year around 2000+ participants gathered for the walkathon event.

On the previous day, Nov 15th there was a cultural event. Attendance was nearly 500. Participants showcased their talent by performing dance, music, fashion show etc.  There were about 40 stalls selling food, clothes, and jewellery. Some also featured NGOs. This community organized event yet again proves that you can care for your health, have fun and do charitable work at the same time.

I had registered for the 5km walk at the APR walkathon. The run started at 6:30am. It was a lively affair with many children participating in the run. After finishing my run, I proceeded to the food stalls for some snacks. Being an active member of Kasa Muktha Bellandur, I can’t help but notice waste wherever I go! Here are my observations on the SWM at the event:

One big positive at the event was, the main caterer at the finish point, serving food in arecanut plates and banana leaf, which were both compostable. Color coded trash cans were placed in pairs at various locations during the event. One bin was meant for food waste and another for dry/recyclable waste. The bins were manned by the staff of Hasirudala, a reputed NGO, employed by the event organizers to help participants segregate their waste before disposal. Although segregation was poor due to lack of awareness among participants, Hasirudala staff managed to segregate most of the plastic cutlery from the food waste. Since almost all food stalls used only disposable cutlery predominantly made of plastic and styrofoam, this was a tedious exercise for the staff. Disposable plates soiled with food needed to be washed before recycling, thus wasting precious water for recovering cheap low value plastics. This practice is also demeaning to those who handled the waste and could have been easily avoided.

Ward 150’s environment engineer Mamatha was proactive in sending SWM rules and guidelines to the organizers beforehand. This was a great move, which I hope is repeated before any mass event in the city. However, I observed there was low awareness among runners, many did not know how to dispose waste correctly and some were leaving their waste at the tables, leaving the place littered. Stall vendors had brought a lot of disposables. I carried my own bottle during the run but disposable bottes and cups were being used in all the aid stations enroute to dispense water to the runners. With planning well ahead of time, this, and other such events, could become near zero waste events. Resuable cups could be used at aid stations and reusable or compostable cutlery at the food stalls. Additionally, participants could be made aware about the disposal etiquette at such mass events.

Main points that stick in my head.

–          Arecanut plates used by the main caterer. Disposable bottles at the aid stations.

Responsible waste management should be an integral part of every event and I sincerely hope all event organizers understand the need to keep their waste footprint minimal. If you know of events being organized in your area, please point the organizers to the KMB facebook page. We can help you with the guidelines to hold greener events! I hope to sign up for a 10km run in a bigger and greener APR walkathon next year and hope all this garbage gyan doesn’t escape my brain when I am dying to finish in one piece! I am told that some very seasoned runners who are also waste-conscious have thrown a bottle or lost a towel and realized it later because the brain goes into survival mode during long races.  So if I err on the side of littering and creating such waste, I hope the organizers provide better options to runners like myself so it is easy for me to reduce my waste footprint. 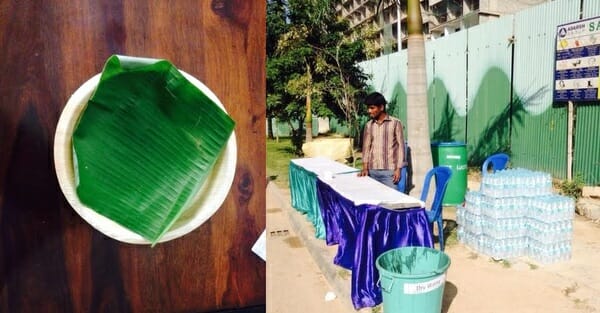 Arecanut plates were used by the main caterer. Disposable cups were used at the aid stations.

Author’s note: This article is co-edited by Ritesh Chitalia.