This fortnightly newsletter is published by the citizen group bellandur.forum@googlegroups.com

Sri Venkateswara temple on the banks of Bellandur lake

A temple dedicated to Sri Venkateswara Swamy will be inaugurated this week in Bellandur Village. The temple is built on the banks of the Bellandur Lake, and made from granite stone, in Madurai style of architecture. Everything, from the temple plan to the size of the idols, is according to the shastras.

The inauguration ceremony, spanning from 29th January (Thursday) to 2nd February (Monday), will be celebrated by live performances by distinguished artists, many of whom are Padma Shree or Padma Vibhushan awardees. Dr KJ Yesudas will be also be performing on March 22nd. The detailed programme can be viewed here.

This temple was the brainchild of Mr. K Jagannath, who is the former President of Bellandur village panchayat. Under his leadership, Bellandur village became a model village, with many firsts to its credit, such as online khata management and running water supply. Several other community members have have joined this effort by donating their land and also contributing in the day-to-day running of this project. According to Mr. Jagannath, the trust was always short of funds, but somehow the work never stopped in the last decade, thanks to a steady stream of donations from the devotees. 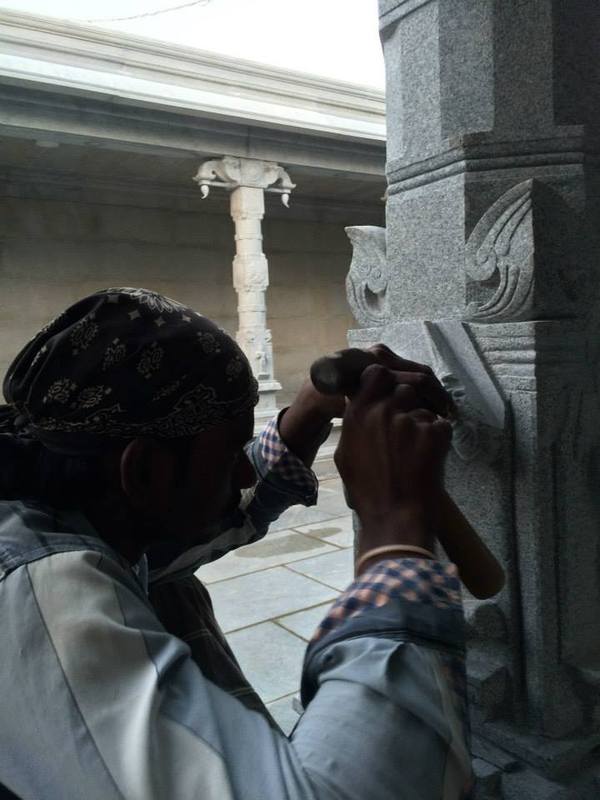 One of the 100 artisans who works at the carvings.

Nearly 100 sculptors were brought from near Rameswaram in Tamil Nadu, to carve the columns of the temple. They have worked for the last ten years to bring the temple to shape. At the entrance, a majestic Gopuram stands 80 feet tall. A havan mantapa is set up in front of the temple, for the pran pratishtha of the idols and of the kalasas to be placed on the Gopuram and Garbha Gruha.

Interestingly, this temple is adjacent to an ancient temple that was built by the earliest settlers in the area, to invoke the gods’ blessings on the Bellandur lake. Mr Jagannath’s grandfather had renovated the older temple in 1935.

The temple is remarkable for setting a new standard for eco-friendliness: It uses only LED lights and there are plans to install solar panels so as not to draw any power from BESCOM. Further, the trust is planning to recycle its solid waste in a local plant. Another remarkable aspect is that the trust is actively involving all sections of the society; right from the inauguration ceremony of the temple. We hope this temple sets an example of progressive social inclusiveness, eco-friendliness and adds a unique cultural flavour to our neighborhood.

A collective E-waste pickup is organized by Hasirudala on February 9th in Bellandur area. E-waste includes bulbs, CFLS, tubelights and other electronic parts and batteries. All bulbs etc should be packaged in their original packaging or corrugated ones. The waste should be kept ready at designated areas with proper packaging done to ensure no accidents during the pickup and transit. Bulbs, CFL and tube lights will be charged according to the MOU/Work order. If you are an apartment/villa community interested in the pick up, please confirm your participation in this collection drive by phone 9742112362 or email bharathi.hasirudala@gmail.com 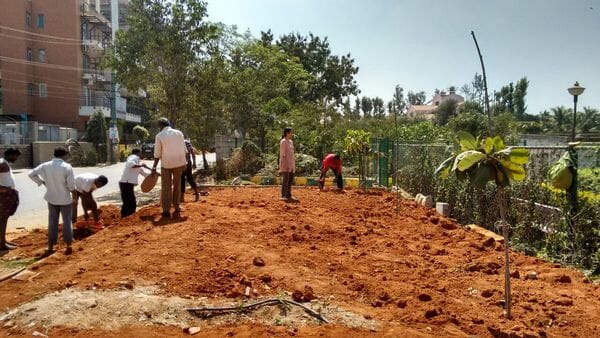 Haralur park undergoes another round of beautification. Pic – Meera Nair 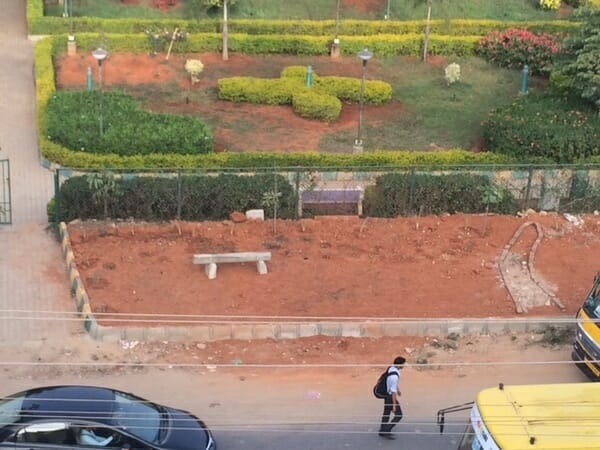 After Clean up. Pic – Meera K

On 26th January, a few volunteers worked hard to spread red soil, plant some flowers and beautify the kerbside of the Harlur Road BBMP Park. It being a long weekend, there were only 4 volunteers. But we managed to finish the work with the help of a few laborers. MAPSAS Trust that takes care of Kaikondrahalli Lake and other lakes in the neighborhood has signed an MoU with the BBMP to support the park. Residents plan to form a local team to raise money and take care of the park in due course.
– Update Courtesy: Meera K