This fortnightly newsletter is brought to you by the citizen group bellandur-forum@googlegroups.com

In a judgement delivered in a case filed by a number of citizen welfare groups in Koramangala, HSR Layout and Bellandur, the Principal Bench of the National Green Tribunal has found prima facie evidence of serious irregularities and imposed fines amounting to Rs. 139.4 Crores on the two developers involved for environmental violations in the project opposite Agara lake (wetlands of Bellandur).

This case was being fought by a series of RWAs and citizen groups in Koramangala, HSR and Bellandur. The main petitioners in the NGT case are Forward Foundation, Praja Raag and Bangalore Environmental Trust. Following were the outcomes of the verdict:

The history of the ongoing litigation dates back to 2013 when a group of Resident Welfare Associations in Koramangala, HSR and Bellandur with the active support of Namma Bengaluru Foundation and the Citizens Action Forum filed a Public Interest Writ in the High Court of Karnataka drawing the attention of the court to the potentially catastrophic consequences that could result if the projects in question were allowed to come up. A few months later, a few other organizations knocked on the doors of the Southern Regional Bench of the NGT which stayed further work on the projects while the case was being heard. A few months after the stay, the case was transferred to the Principal Bench of the NGT in Delhi which passed orders on Thursday with regard to the matter. The original High Court case continues with regard to the issues of land acquisition, allotment and procedural abnormalities.

Federation of Resident Welfare Associations for restoration of Ibblur Lake has reported a series of fence cutting incidents by agents who are cutting and selling the grass within the lake area. On 2nd May 2015, 11:30 AM, the same people were seen cuting the fence at Ibblur lake at ORR Service road. This was reported to the Inspector, who promptly sent a beat constable on the ground and caught the person red-handed. A formal complaint has been registered at the HSR layout and a demand to recover all costs for repairing the Ibblur lake fence at the 4 broken fence sections has been put forth. Police was requested to report status of action taken to uthe RWA federation and the BDA Authority, HSR Layout

Saying NO to disposable cutlery 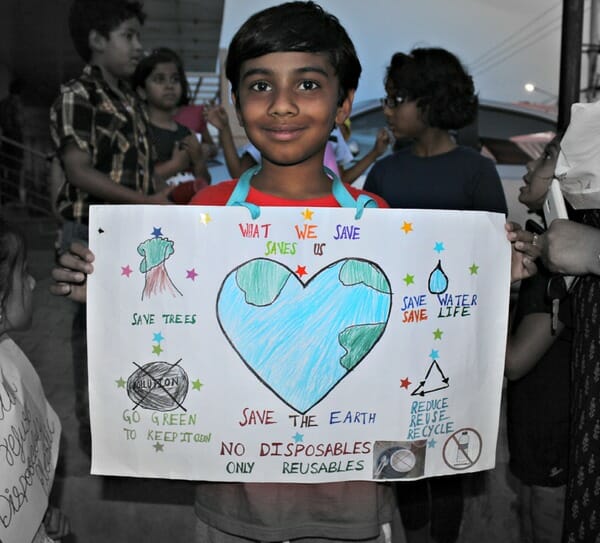 Say no to Plastic

On April 24th, nearly 40 Children from apartments surrounding Sarjapur Road descended upon a local Dosa joint with their own steel plates. They carried the message for the shop-owners and other customers that the materials that disposable plates are made of are bad both for the consumer’s health and the environment. Disposable plates cannot be recycled because of food contamination. They are either landfilled where they leach into ground water or are burnt releasing toxins into the air. Eating in reusable plates is great because the plate can be reused for years and does not leach chemicals into food like disposable plastic or styrene. The good news – the Dosa joint has made the switch to reusable plates with banana leaf lining, and there is a visible reduction in the amount of waste being generated at the eating joint. It sets a good precedent for more such campaigns to follow!

In continuation with the anti-plastic campaign…

Ms Nalini Shekar from Hasirudala (http://www.hasirudala.in/) will be presenting the challenges in dry waste management and recycling. She will share the insights on what is actually recycled and what not. This talk is facilitated by Kasa Muktha Bellandur volunteers. 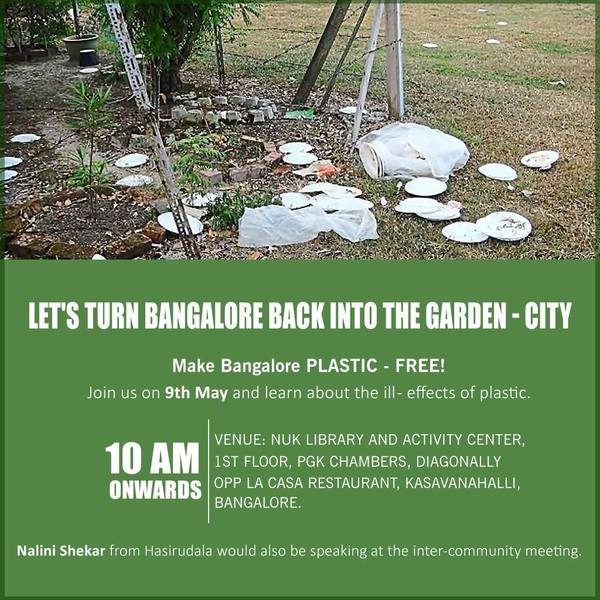