Here is the press release from the Save Bellandur Lake organising committee. Pictures from the run are attached.

A hundred odd people assembled on Outer Ring Road in front of Pratham Motors, at the start of the Save Bellandur Lake Run. Pic: Meera K.

Jagannath and Rammurthi addressing the participants of the Save Bellandur Lake Run. Pic: Meera K.

The stink and the sludge of the Bellandur Lake could not be missed. Pic: Meera K.

Participants braved the hot sun and stink of the lake. Pic: Meera K.

There are still a few fields left beside the lake, on the other side of the road. Given the contamination of the lake, the produce is likely to be contaminated too. Pic: Meera K. 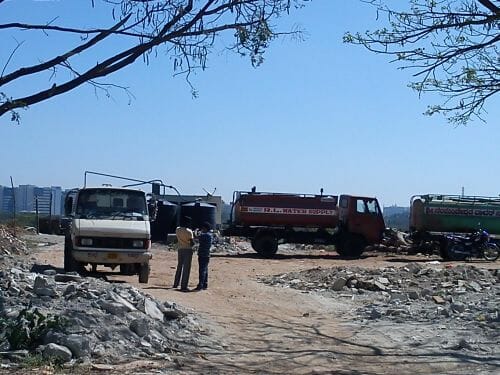 A water tanker collects water from a borewell next to Bellandur lake, whose water is contaminated according to tests by the Pollution Control Board. Pic: Meera K.

Children from Yamalur government school (situation a few hundred yards from the Bellandur Lake) sit near the small bridge at Yamalur, watching the green foam and effluents moving downstream. They later had a picnic in the small garden nearby. Pic: Meera K

The Save Bellandur Lake Run. Pic courtesy: the organisers.

The Save Bellandur Lake Run. Pic courtesy: the organisers.

Early on Sunday morning, hundreds of concerned citizens including young children, IT Professionals, home makers, students, environmental activists, ecologists and villagers gathered on the Outer Ring Road in front of the glitzy IT companies. Bicyclists and people carrying many colourful posters added to the spirit of the event. This was a run like no other, no prizes for the early finishers besides a welcoming stench in the last kilometre of the race winding around the banks of Bellandur lake. Welcome to the Bellandur Lake Run, the latest protest from citizens on a 13 year demand for action from our government.

The Bellandur Lake, spread over 950 acres is the largest lake in eastern Bengaluru. Unfortunately, it has been a victim of pollution thanks to the inflow of untreated sewage water from over a third of Bangalore. The total volume of sewage entering the lake directly is estimated at 500 Million litres daily – which is roughly 4 bucket loads of sewage from each of the 8 million citizens of Bangalore.

Only a tiny fraction of the sewage is being treated and this has been a primary cause for the total destruction of the lake and its eco-system. Industrial effluents discharging into the lake and encroachments in the wetland areas have also contributed to the sad state of the lake.  The water is contaminated with high concentrations of Lead, Cadmium and Chromium. The threat of severe health consequences to a large population in Bangalore looms large due to seepage into ground water and usage of these waters for irrigation of vegetables and produce in downstream areas.

K Jagannath, former Panchayat Chairman of Bellandur says “This was a beautiful lake in our childhood, abounding in many varieties of fishes. We used to swim in this lake and the lake water was used for drinking and irrigation purposes. Our lake has been taken for granted and completely ruined over the years in-spite of enormous effort from concerned citizens over the years”.  Many villagers from Yamalur (another village on the banks of the lake) also echoed these sentiments of a beautiful lake literally snatched from their neighbor-hood. Diseases, mosquitoes and stench abound in a once scenic and pristine location, famous for its fish-stock.

The history of this struggle started over 13 years back with Rammurti (an environmentalist) and Jagannath fighting and winning a historic case in the Bangalore high-court which directed the government to clean up the lakes and prevent untreated sewerage entering into the lakes.

1. To take steps not to allow polluted water or any open air polluted water or underground drainage water to flow into the tanks (Lakes) in the Bangalore City and surrounding the Bangalore City and to make arrangements to divert such water to particular place where it can be cleansed by sewerage plants and use for industrial purpose agricultural or gardening purpose.

2. To Take steps to protect all the tanks and to maintain the tanks as they were in existence earlier to damage and see that drainage water is not stored in the tank without being polluted by flow through underground,open air and sewage water into it.

Rammurti says “Having been involved in taking the fight to court, I am pained to notice that Bellandur lake receives more untreated sewage than ever before. Only a small portion is being treated and this is an eyewash. In these 11 years after the honourable court’s judgement, Bellandur lake has deteriorated many folds. It is shameful that even a court verdict is being thrown to the winds.”

R Govindarajan, one of the organisers of the run, feels, “It is clear that a comprehensive Sewage Treatment Plan is an urgent need for an IT city that boasts of being the Silicon Valley of India. This is needed even more than swanky airports and glitzy Metro trains”.

In spite of the damage done over the years, environmentalists and scientists say that a complete restoration of the lake is possible. Active Citizens from Sarjapur Road and Bellandur communities teamed up to restore the Kaikondrahalli lake (next to Total Mall, Sarjapur Road)  and it is inspiring to see this lake now, with 35 species of birds currently making it their home. Says Ramesh Sivaram of Forward 150  (an organization of over 150 Residents Welfare Associations in the Bellandur ward), ”It is critical to rejuvenate and maintain the lakes of our neighbourhood, especially as a source of water in this water scarce area.” Forward150 members feel this is a viable alternative given the doubts about the government’s commitment to provide Cauvery water.

There are numerous options and technologies for effective sewage treatments and it is very feasible to treat all the sewage effectively. New technologies such as Soil Bio Technology developed by professors at IIT Bombay and currently deployed in the Worli Sewage Treatment Plant besides other locations, offer very cost-effective and efficient ways of treating sewage that minimize operational expenses. At Rs 7.5 crore per 100 MLD, with an operating cost of Rs 25,000 month for 100 MLD, these are highly cost and space effective technologies which can be evaluated.

Coming back to the Run, all the participants including the slow amblers, quicksilver runners and bicycle enthusiasts were winners at the end by pushing for awareness and action on a cause that will benefit all Bangaloreans.

A wonderful temple for Lord Balaji is currently being built on the banks of the Lake Bellandur, by K Jagannath and one prays for divine grace to result in concrete actions here. A few battles might have been lost but the War lies ahead.

Those interested in supporting the initiative to save Bellandur lake can contact the organizers at savelakebellandur at gmail.com