Disclaimer: this information is provided by Prithvi K, an expert on snakes, it is for your information only. Please do not attempt to catch snake(s) based on the information provided here.

Prithvi K, a trained snake catcher and resident of Sarjapur Road started rescuing snakes from January 2008. According to Prithvi, out of almost 270 varieties of snakes found in our country, only four are venomous. By learning to identify these four, we can allow non-venomous snakes to live in our surroundings, and maintain the balance in our ecosystem.

Prithvi says, “If you are interested in pursuing herpetology as a hobby/ profession, I suggest you do it only after proper training and in-depth knowledge in this area. For this you can contact me and I will direct you to the right person.”

Here are the snakes that have been found by Prithvi around Sarjapur Road. 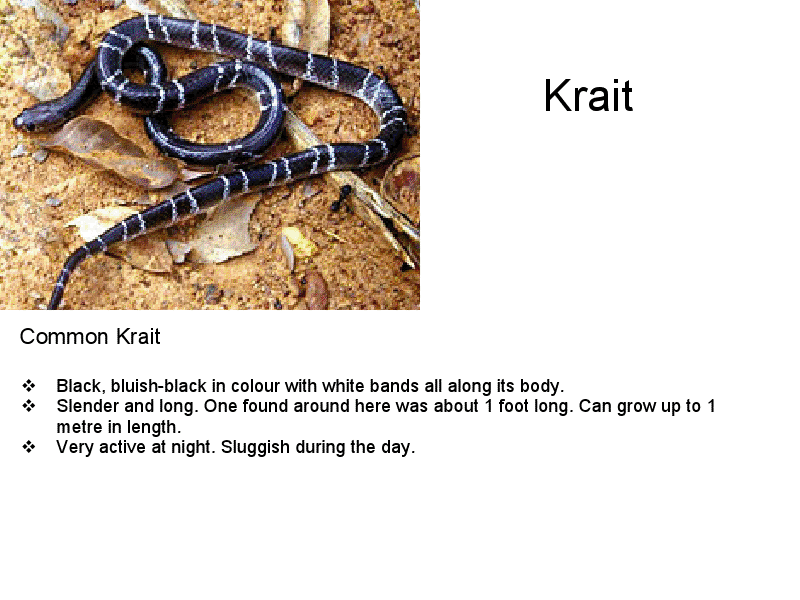 Spectacled Cobra
* Colouring – light brown, dark brown, greenish-brown.
* Colouring is generally uniform through-out the length of the body, except for the head and neck.
* It has a distinctly visible black mark in the neck area, that forms the ‘V’ when the snake opens its hood.
* Scales on the hood and body are oval-shaped, and look like grains of wheat (clearly visible in the pictures). It gives a loud hiss and opens its hood when disturbed or feels threatened; more active during the night.
* Largest one found around here was approximately 7 feet long. Can grow upto 8 feet in length.

Viper
* Has a distinctly triangular head, prominent because of a slender neck, with a thick body, and a thin tail.
* It is slow-moving but strikes very fast. Very active at night
* Has interesting patterns all over the body.
* Common ones found here – Russell’s Viper, Saw-scaled viper
* The largest Russell’s Viper found around here was approximately 5 feet long. This is the size of a fully-grown adult.
* The Saw-scaled Viper found here was about 10 inches in length. It can grow up to a maximum of 3 feet in length.

Krait (Common Krait)
* Black, bluish-black in colour with white bands all along its body.
* Slender and long. One found around here was about 1 foot long. Can grow up to 1 metre in length.
* Very active at night. Sluggish during the day.

Note: It is possible that there are other venomous snakes in our area (Banded Krait, Coral Snake, King Cobra, Bamboo Pit Viper, Black Krait, etc.), which have not been included here.

The full presentation including pictures of all snakes spotted in the area can be seen here.

1) Carry a torch with you when you walk out at night, even areas within your compound which are not well lit.
2) Install steel or nylon mesh to all windows, and have a steel mesh door for all external doors.
3) Avoid creating dark corners along the outer walls of your house.
4) Do not dump/ pile unused items in basements, backyard. This becomes an ideal place for rodents and hence visited by snakes
5) Constantly check for rat burrows in your garden, and have them closed immediately.
Snakes usually bite extremities of our body, i.e. feet, calf, palm, arm, etc.
In case of snake bite:
1) Calm the person down. Tell him he will be taken to a hospital immediately, and things will be fine. This helps in keeping blood flow normal. If you panic after a snake bite, blood flow increases, and this takes the venom very quickly to vital organs of our body.
2) Roll a cloth (like dupatta) or crepe bandage around the entire limb, keeping the limb straight at all times. Do not roll it too tightly or too loosely around the limb. It should have a medium tightness, that allows blood flow; the idea is to slow down blood flow. The limb has to kept straight at all times.
3) Identify the snake if possible (I have given a link below on the snakes that I have found in and around the Sarjapur Road area). This helps in proper administering of anti-venom. If bitten by a non-venomous snake, do not bother to do anything. The wound will heal naturally.
4) St. John’s Hospital, Koramangala, is well-equipped to handle snake-bite cases. Rush the victim to this place.
Couple more points on snakes:
1) Snakes do not attack unless cornered. I have caught large cobras and vipers (deadly venomous snakes) that only tried running away when I’m holding their tail, instead of attacking me. It is their natural tendency to move away from anything that is larger than them, even the venomous snakes (This is not true for the King Cobra, found in dense jungles of India, and the Mamba, found in Africa and Australia).
2) When you spot a snake around your house, if you just let it be, it will go away the way it came.
3) Snakes are a very important part of our ecology (even here in Bangalore city). They play a major role in controlling rodent populations. It is best to co-exist with them.

About Satheesh A 0 Articles
Satheesh A is a member of Forward 150, the residents association of Bellandur ward.