The story I’m about to tell here is about the discoveries at the Everyday City workshop at the School of Architecture & Planning, CEPT University. This workshop was held as part of CEPT’s Summer Winter School from 1st to 17th Dec 2015. The question we asked was: How can we bring about small changes in our perception and that of others through documenting how people negotiate streets on an everyday basis? The two key modes of inquiry were Photography and Map-making. The course participants worked in groups of three, approaching topics that they found riveting, ranging from cows in urban spaces to children habiting streets.

Following are the summaries of the group projects:

The symbiotic relationship between humans and cows in the city 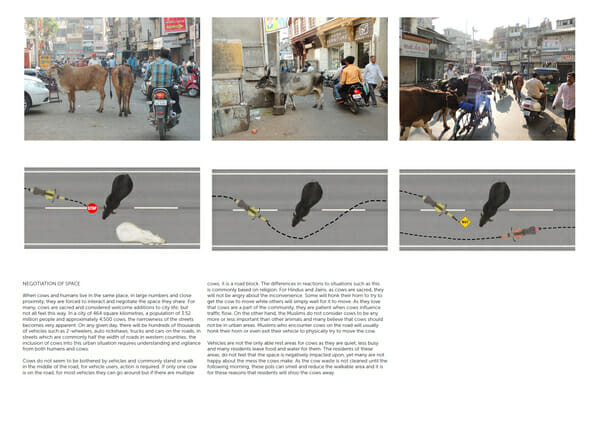 Cows play an integral role in everyday life in India. This study attempts to look at how cows affect people and how people affect cows in the urban space. It finds that the people impacted by the cows are caretakers, milk customers, worshippers, fruit and vegetable vendors, pedestrians, vehicle users and the wider community. Their milk provides for the city, their waste can be used as fuel and fertiliser in the villages. While the cow is a source of livelihood for the cow owner and therefore has economic value, it has religious value for much of the country. We look at how these implications of cows in the city influence everyday life.

How does religion influence the everyday space?

The Bhadra Plaza is situated in the heart of Ahmedabad outside the Bhadrakali Temple. The plaza is influenced by the temple, which results in informal vendors placing themselves in an invisible axis in front of the temple. The vendors are arranged in three zones – the religious zone, the religious & economic zone and the economic zone. This investigation looks at the everyday routine of the temple that is created within its built and unbuilt spaces and how this is connected to the informal vendors at the Bhadra Plaza.

Being a child in an informal market environment 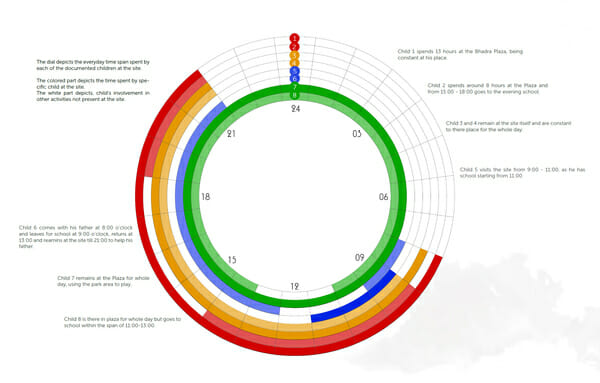 How does a child in a busy marketplace in the city of Ahmedabad live and adapt to a physical environment that is mainly a place for business? How is their purpose of being there reflected in their behavior and which factors affect this behavior? How is this different from what we see in any other country in the world? This project tries to answer these questions by observing and analyzing the general activity of children at the Bhadra plaza in the old city area, as well as eight specific children. These are categorized in four groups – children who are vendors; children of vendors; school-going children and homeless children. A color code for each category of children is introduced to tell them apart. The eight children were interviewed and asked about their everyday practices and routines, their backgrounds and their social relations to others around the site. Their routines, movement patterns & location were mapped over several days. 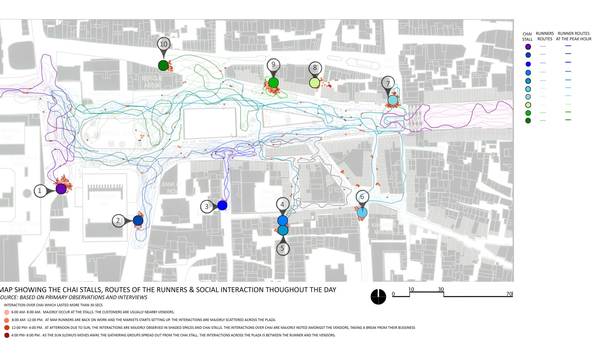 The ‘everyday’ practice of tea can become the starting point of social spaces in an Indian city. This study looks at the ways in which chai vendors at the Bhadra Plaza in the Old city area of Ahmedabad create their territorial boundaries in the plaza and how these are negotiated. It attempts to understand the daily production and distribution trends of chai and how social interactions resulting from it bring about changes in the spatial patterns of the plaza and the streets that envelop it. It also observes how people negotiate spaces as they gather together at a chai stall or how tea runners reaching out to customers sometimes displace the flow of people or alter their patterns of movement.

How gender influences places of rest within the everyday city 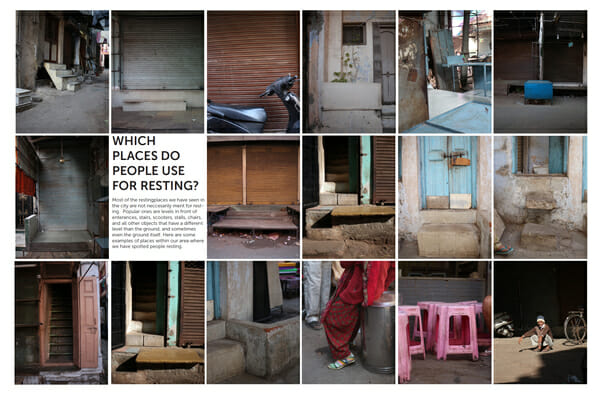 We find that women seem to be less dominant in Indian society in general and in the everyday city in particular. The disparity between genders is an issue which affects people as they negotiate the streets in the city. This study looks at how this negotiation influences how and where people choose to rest during their day-to-day activities. We look at the physical factors which define these places of rest. We have also included a comparative study that shows how men and women determine and manage their place in the Everyday city.

The Everyday City will be offered again as part of CEPT Summer School 2016 at the Center for Public Policy, IIM Bangalore from 10th to 25th June 2016. For details: Click here

If you have any questions, you can reach me at: kiranmkeswani@gmail.com.

About Kiran Keswani 36 Articles
Kiran Keswani is Co-Founder, Everyday City Lab, an urban design and research collaborative in Bangalore that focuses on the everyday practices of people in order to develop a people-centric approach to urban design and planning.
Website Facebook YouTube LinkedIn
Advertisement

Kaikondrahalli Kere Habba is back: Festival enters its sixth year

The Chitra Santhe as an urban space