One thing led to another. I was looking for feedback on sketches of the street life at Russell market and that led to the suggestion: “Why don’t you try meeting Mr.Zaffar Sait? He has been an old resident of the neighbourhood” So, that’s what I did and then couldn’t help but turn it into a post just so that others would have the chance to listen to this story as well.

So, here is the account of life in Bangalore in the 50’s as narrated by Mr.Zaffar Sait, who belongs to one of the most well-respected mercantile families of the city – the family that holds the replica of the key that opened the Russell market in 1927. 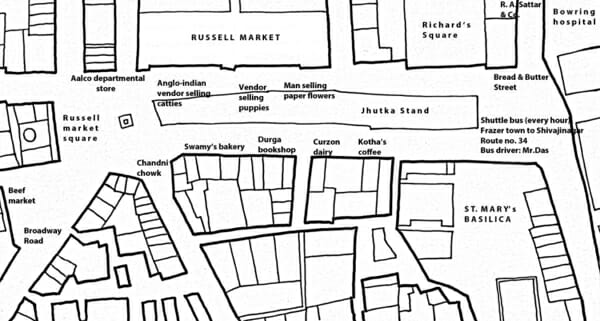 Memory map of Russell market area in the 50s

“Those days, in the late 50’s, if you wanted your vegetables, your fruits, you had to go to Russell market. There was no other place, but, by and large, everybody would come there to pick up fresh vegetables or meat. This street also had a very famous bakery. It was called Swamy’s bakery. It was famous for its ‘Japanese cakes’. They were soft-centered with butter with two crisp biscuits on top. There was a “quadrant” in the front where today the tomato auction takes place. Earlier, it used to be a Jhutka stand. Also, there would be a lot of political activity there, functions, speeches. My father had a shop on what is now called Meenakshi Koil street. Back then, it was called ‘Bread & Butter’ street.

And, before AMUL butter came, there was a Curzon diary. You had to go there if you wanted to buy butter. Those days it would not come packed as you see it today. They would have a huge container or bucket. For one anna (six paise) or one and a half annas, on a stiff butter paper, they would make a pudi and give you. Chowdri Nagappa – he was the person there, selling butter. There were local phelwans in the area. They were not rowdies. Wrestling was a sport. These local guys would come, exercise and then straightaway swallow this butter. The hamams were also there, for them. The hamams, the phelwans, the butter. It was like a mohalla.

Then, a famous bookshop was there,  where you went for your school books. It’s called Durga bookshop. I don’t know whether it’s still there. There were two bookshops there, where all the students in the cantonment area went to. Our area, that is Fraser town had a lot of English schools. You had to go to Noronha road, to pick up your books. More than buying the books, what was exciting was that they used to give us printed labels.

I remember going there to Russell market, also for magazines. There was a magazine called Sports & Pastime. There were two newspapers that published sports magazines. It was The Hindu that brought out Sports & Pastime. The only bookshop that sold it was here. When the Cricket season was on, they used to print colour pictures of the Cricketers and it used to sell off like hot cakes. You had to pay an advance to the bookseller if you wanted the next issue. I still have scrapbooks with pictures of my favourite cricketers that I started about that time, a time when Pakistan played India.”

Mr. Zaffar Sait gave this detailed account of what he called the ‘mohalla’ – the arabic or urdu term for ‘neighbourhood’. It is a description of how everyday life was in the Russell market neighbourhood and how the people living in the adjoining neighbourhoods of Frazer town came here frequently. Jane Jacobs has pointed out, in her 1961 book, ‘The Death and Life of Great American Cities’ that Street neighbourhoods have no beginnings and ends setting them apart as distinct units. The size differs for different people, because some people extend their street acquaintance farther than others. Here, in Bangalore, the neighbourhoods within the Cantonment area often overlapped with people knowing each other and depending on each other for many of their everyday activities.

Today, it is a different city that we experience, where neighbourhoods are physically denser with stronger transport connections but where people know each other less and less. The urban planner, Reginald Isaacs points out that because city people are mobile, they can pick and choose from the entire city for everything from a job, friends, to shops, entertainment or their children’s schools. With this fluidity of use and choice, the concept of ‘neighbourhood’ in the city becomes less meaningful.

From these old accounts of life back then, it seems like life was not so easy then with many of the household tasks being extremely time-consuming: “Those days, you had to go buy your firewood too. Kerosene came later. That would come on a hand-cart or haath-ki-gaadi. On Mosque road, you had a lot of the firewood shops. They were called firewood depots. You could choose your wood, they’d weigh it and then cut it for you. You had to make sure it wasn’t wet. And then, you had to go to the Bakery to collect ash, to wash your vessels.” If everyday life wasn’t simpler, why does it seem that cities were simpler to live in? Did the coming of the automobile make street life and neighbourhood life more complex? Not only do we now crowd our streets with parked vehicles and moving vehicles, we also move to other neighbourhoods with greater ease – in cars, two-wheelers, buses and autorickshaws. But, with this, we seem to be moving away from the ‘mohalla’ or ‘neighbourhood’ as the self-contained unit that it once was.

Even within the Russell market neighbourhood or the Cantonment bazaar, there were economic and visual variations from one street to another: “The cheaper, less fancier goods were available on OPH road. One of the things you also bought at the market were trunks. You used them to store things. There were no almirahs then. Everybody got a trunk, with a lock. The people who shopped on Commercial street were mostly the Europeans. We had a store, run by my grandfather, called R.A.Sattar & Co. which was opposite Bowring hospital. It sold items that were imported from England and catered to the foreigners.”

My grandmother had her sister living in the cantonment area. So, those days, before the phone came, she would sit and write a note, like a letter – one or two pages. On a Saturday, because I had to go and buy the Sports & Pastime, I would take the letter, catch the bus, get down at Russell market. My mother would give a list of provisions which I would give at a shop which was behind Russell market. There was only one bus, that would ply from Shivajinagar to our area – it would take one hour to go and come. So, if you got off at 11am, you could be sure you’d get the bus back again at 12noon. You knew the driver. There was only one driver called Das. It was Route no. 34. He knew you and you knew him. So, you’d get off, go pick up your magazine, go behind Russell market, give the shopkeeper the chit. In the meanwhile, I’d go to my grandmother’s place, give her the letter. She would read the letter and then write her reply. So, you’d pick that up, pick up your provisions and you’d have your magazine to look at.”

That was life “back then”. It isn’t that the street boundaries have changed outside Russell market, it is the social life within these boundaries that has changed. On the ground, the physical urban fabric undergoes transformations as infrastructure, traffic, security and other issues become more complex and in the master plan, it changes colour as Planners forecast a land-use different from the earlier one. What we do not seem to give so much importance to is that the social fabric of the city has changed. We need to record, to analyse some of these changes as well and relate them to the growth of the street, the neighbourhood. Jane Jacobs reminds us that every citizen cares or must care about the street environments where he lives, no matter how much choice he has of pursuits outside of it. In the end, people depend on their neighbourhoods for the kind of everyday lives they lead.

Please do also check out: https://www.facebook.com/groups/lifeinthestreetsindia/