Placemaking is an approach to the design and management of public spaces that draws upon the strengths and aspirations of the local community. Whereas ‘space’ is a physical entity, a ‘place’ is imbued with memories and evolves as people interact with each other socially and culturally in the public realm. It is a term that Architects and Urban Planners in the western countries began to use in the 1970s to describe the process of creating parks, plazas and streets that could attract people. In India, the street was already a vibrant place with a family celebrating a wedding; the temple deities being taken through the street in the ratha; children playing a cricket match or labour unions staging a dharna. For us, it has not been necessary to understand how to “create” place. However, it may be useful to know how to “enhance” place. 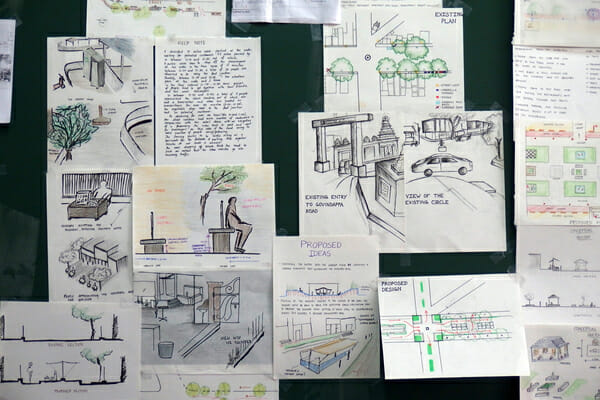 Fig.1: Sketches prepared by the participants based on their observations in Gandhi Bazaar

On 16th May, we conducted a ‘Placemaking workshop’ at the Department of Architecture, BMS College of Engineering, Basavanagudi to explore this concept in the context of Gandhi Bazaar. It was a one-day workshop initiated by Ms.Vaseem.A.S and Dr.Shobha.M.N., full-time faculty at the BMS College of Engineering. The workshop was meant to further the work that the 2nd year students had been doing as part of their architectural design studio for the semester. I was asked to interact with the students for that day and share some ideas with them. We jointly agreed that the best way to learn about what makes a great place is to get out and observe how public spaces work (Fig.1). Ideally, to understand a ‘place’ can take from a few weeks to a few months. We had only one day. So, we’ve made a small beginning with this workshop. I’m sharing here some of what transpired through the day.

Placemaking is a process-oriented approach to making public spaces better and some of the principles** we focused on are: one, The Community is the Expert i.e. The starting point is to identify the assets within the community such as the people who can provide a historical perspective or insights into how the area functions; two, Create a Place, not just a Design i.e.If you have to create a place, a design will not be enough. We need both Design changes + Management changes; three, You can see a lot just by observing – Looking at how people are using (or not using) public spaces and finding out what they like and don’t like about them.

It was accepted that Gandhi Bazaar already had placemaking within it. We also agreed that places were created by people. What the designer could perhaps do was create the environment for placemaking to happen. For instance, the designer could introduce a new architectural element, a landscape element or an urban design element, suggest a new way of managing the place on an everyday basis or develop a strategy for how the place could adapt to changes over the next twenty years.

I thought it would be good to do an exchange of ‘places’ we remembered. I shared some places I had experienced and continued to remember long afterwards – from a marketplace in Mumbai, to a weaving village in Andhra Pradesh (Fig.2) to a heritage town in France. 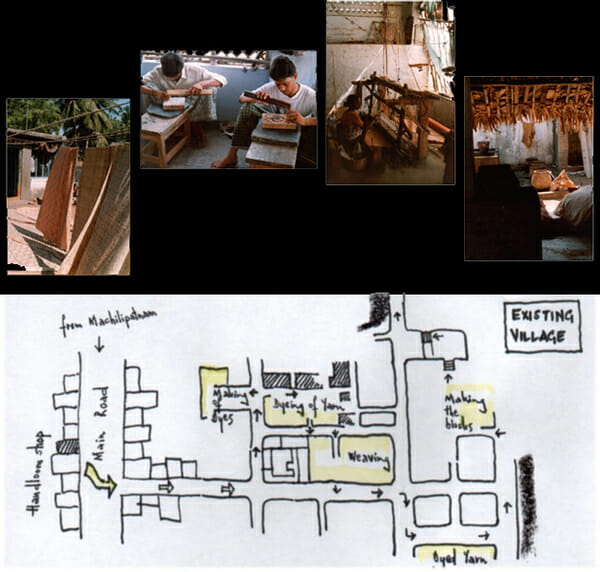 Fig.2: Placemaking at Pedana – a weaving village in Andhra Pradesh

The example from the weaving village was of Pedana, near Machilipatnam which is known for its Kalamkari work. I had visited this village many years ago with a historian and on arriving there we had been greeted by a little boy who had offered to show us his village. He took us very excitedly through the place, starting on the main road, into a small street, inside a house, through a courtyard, into another street, passing by verandahs and trees, climbing steps, to the carving of blocks, coming out into a backyard, a narrow lane, some more weaving, to yarn hung to dry in the sun, to the sound of the working loom. It was in some ways an experience of a “place” that we had seen with the eyes of a little boy who had condensed its memories and its lived experiences to share it with us.

One of the workshop participants shared her experience of place – she remembered distinctly the verandah of Gandhiji’s house at the Sabarmati ashram in Ahmedabad, with the adjoining courtyard and his weaving room. She said that it was very calm there and you could see the Sabarmati river in front of you, it was well-shaded and pleasant to sit. So, in this example, the river also plays a role in the place-making, you see it from afar but it becomes a part of your unforgettable experience.

Another participant recounted his experience of the dargah in Ajmer with the street that leads upto it having a vibrancy that was special. He pointed out that as you enter the street, there are vendors selling food and clothes and as you move nearer to the dargah, there are other vendors selling incense and little idols. He felt that the sanctity of the dargah was already in the street before you had even entered the dargah. Yet another participant talked about the Chitra Santhe, the annual art fair with the street outside the Chitrakala Parishath and its rocky landscape as an example of placemaking. We realised that creating activities that people could participate in was a crucial part of making a ‘public space’ into a ‘place’. 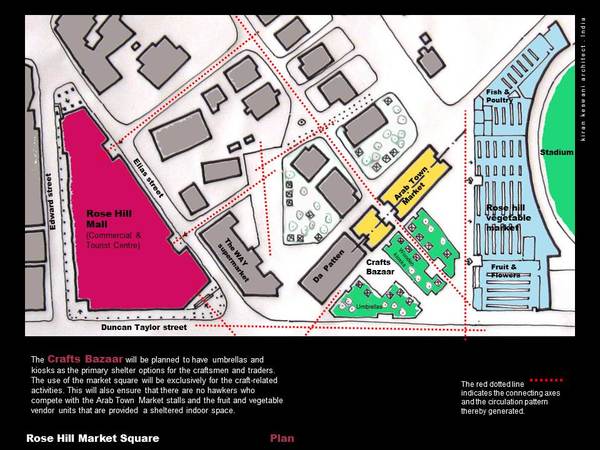 Fig.3: Rosehill market redevelopment project in Mauritius – an integrated development plan that was based on feedback from the stakeholders

We then discussed a Market redevelopment project in Mauritius (Fig.3). The ‘Rose Hill Market Square’ project had proposed an Integrated Development plan that included the ‘Rose Hill Mall’ (the Commercial and Tourist centre) to be built at the existing market site, the Bazar Rose Hill (Fruit & Vegetable Municipal market) to be rebuilt at the Duval Stadium and the Arab Town Market to be relocated to the Bus-station. The new plan had suggested a cleaner, more hygienic market environment and better parking facilities and was based on joint meetings with the market vendors and the Rosehill district officials where some of the initial conflicts had been resolved.

Soon after the morning’s discussion, we started with the fieldwork. The students identified nodes along the Gandhi Bazaar main road where levels of people activity were high (Fig.4). They worked in groups making visual observations/sketches, doing user interviews and writing field notes for these specific nodes. One of the participant groups made wrote the following notes: “It was recorded that at 12 noon, 10 autos were parked at our node, waiting for potential customers. 53 autos passed by between 12:15 and 12:20, out of which 4 autos dropped off passengers here. Between 12:20 and 12:30, 20 people used the food junction. From 12:25 – 12:35 three groups of people got together with their friends. For over 45 minutes (12:00-12:45pm), the vegetable shop next to the food junction had no customers. On observing for over an hour (12:00-1:00pm), it was found that street vendors had more number of customers than the formal shops lining Gandhi bazaar, with the exception of a pharmacy”. 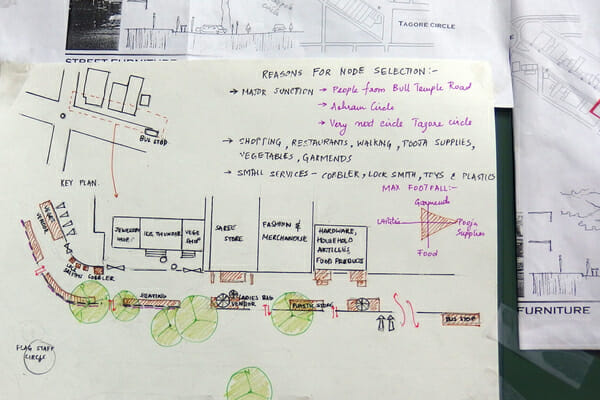 At the end of the day, the field investigations were translated into sketches to share findings and possible ways to make the place better. It was found that the parts of the street that were under the shade of the tree were used more – with a cobbler or a puncture shop located there or with a flower seller doing business there. A key maker had changed his location twice through the day depending on which part of the footpath was in shade. Some women vendors were holding an umbrella to protect themselves from the sun since the government does not permit them to put up their own shading devices. It was observed that there is only one public toilet on this street which is used mostly by the vendors. The pedestrians did not seem to know about it. Some parts of the street were used by people as rendezvous points, such as the Ice Thunder corner. Outside the Vidyarthi Bhavan, the density of people was higher. Some nodes or activity zones had a fast pace, others were slower with lesser pedestrian movement. By the end of the day, we had been able to assimilate some of what made Gandhi Bazaar into a place. We realised that we would need a long-term engagement to propose design options that could make it a place attractive to different user groups and an effective public space.

This one-day field exercise was for us an exciting way to explore the concept of Placemaking and the idea of pedestrianising Gandhi Bazaar. However, in actually implementing a placemaking or pedestrianisation exercise, it is useful To experiment with small changes – The complexity of public spaces is such that you cannot expect to get everything right in the beginning and to know that, You are never finished – Being open to the need for change and having the flexibility to enact that change is what builds great public spaces and great cities**.