I was on my way to a temple in Dodda Mavalli because it was Gowri Ganesh and I had been told it would be a day when devotees would come both to the Maramman temple and the Ashwath katte next to it. I was just curious to see what the rituals were like on this day. The autorickshaw driver abruptly stopped at the end of a narrow lane much before we had reached the temple. In front of us, there was an open space between small houses and there were tempos parked there. Small idols of Ganesha were being carried away by people and a few were being loaded onto the vehicles. There was no way to go any further on the auto. I had to jump off there and walk the rest of the way to the temple.

As I began to walk, I caught a glimpse of larger Ganesha idols on the main road. It was so completely distracting. Instead of walking towards the Maramman temple, I walked into the little cross lane that connected to the main road. And, on the main road, the sight was so breathtaking. An entire street of large Ganesha idols. It was a first-time experience. I didn’t remember seeing anything like this before here or in Bombay where I’ve lived and where the Ganesha festival is celebrated with such grandeur. A good part of that evening was spent in walking through, walking past and walking into rows and rows of beautiful Ganesha idols, all ready to be taken to a home or a neighbourhood someplace else in the city. They had been waiting, the idols, to be loaded. The queues of the tempo carriers were long. This was R.V.road or Rastreeya Vidyalaya road at VV Puram or Visweshwarapuram, where Ganesha idols are part of streetlife when the Ganesha festival is just about to begin. 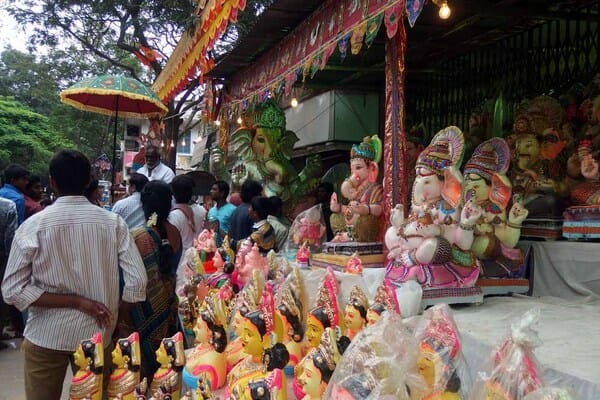 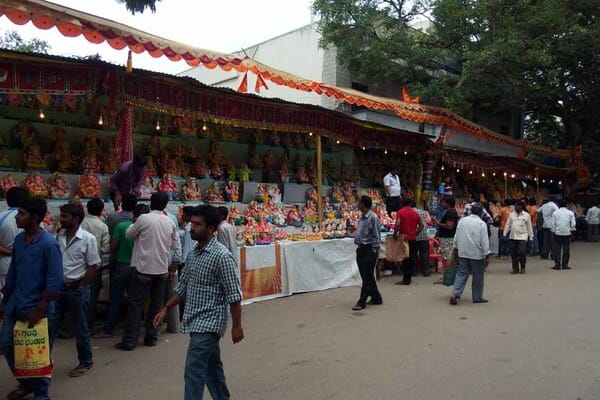 During Diwali time, one sees stalls like these selling firecrackers. I remember the street at Dabagardens in Vizag with its rows of temporary shops selling diwali crackers. In Ahmedabad, it is the same and other places too. 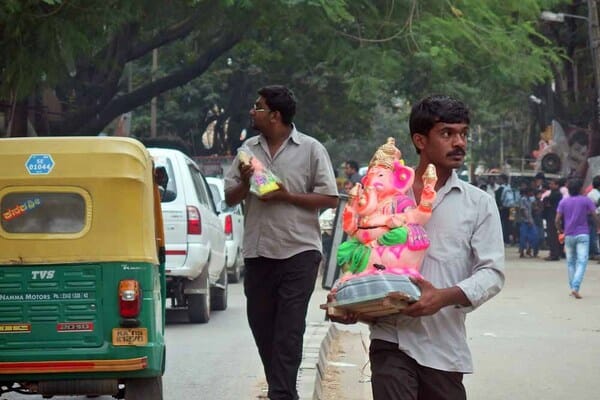 Some people walked home with their Ganeshas. Some took them to their neighbourhoods in tempos. 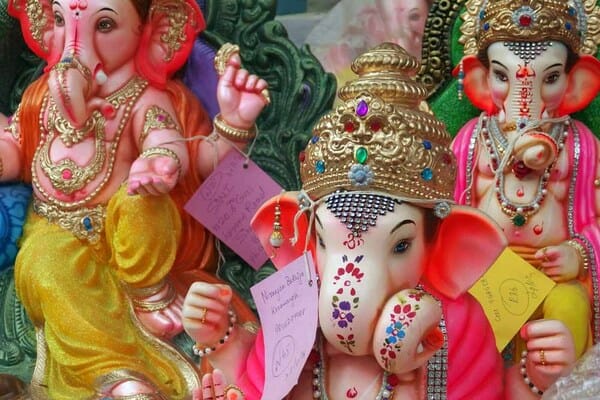 Ganeshas that had been chosen already and waiting to go home. 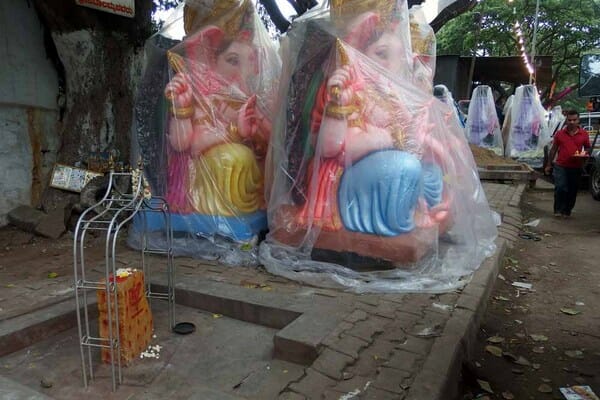 Here, street space already has a shrine next to the peepul tree nearby. The Ganeshas will sit a while before they leave. The large godowns had a strict token system. If you had placed an order, you could enter. If not, you couldn’t. 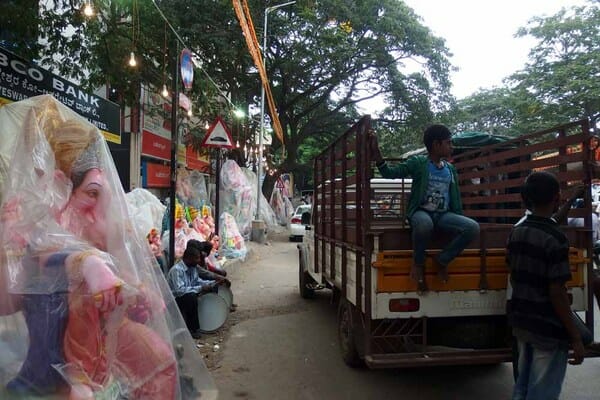 As the queues to the godown deliveries were long, the drummers who were to accompany the tempos back with celebration songs waited patiently on the footpath. 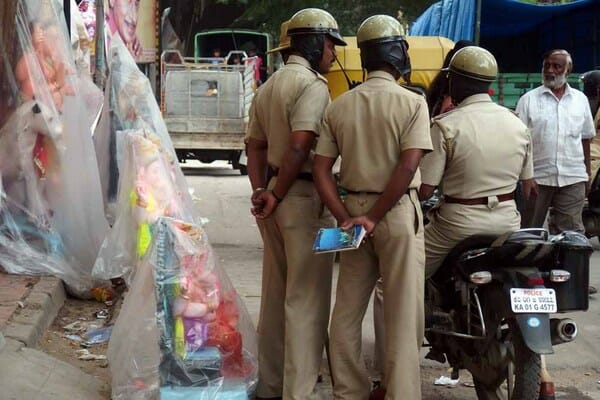 As with other festivals at other times of the year, the government provides facilitative support. The police were on extra duty here at VV Puram while the Ganeshas were being loaded and taken away. The crowds were of course more than usual and extra care had to be taken for everyone’s safety. 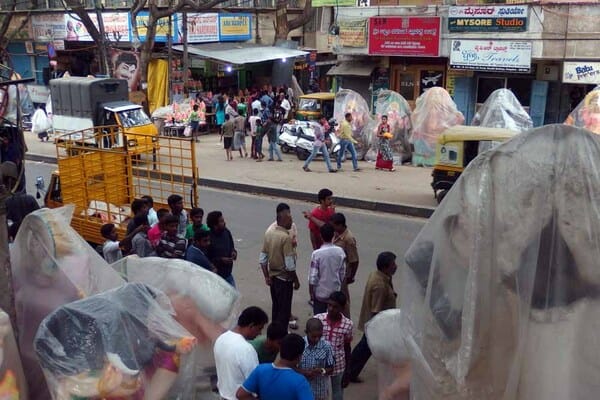 On both sides of the street, the footpaths were completely occupied. Pedestrians walked on the road. Both People and Cars had to “adjust”. This is how streetlife is during festival time – in Bangalore, in any city in India. 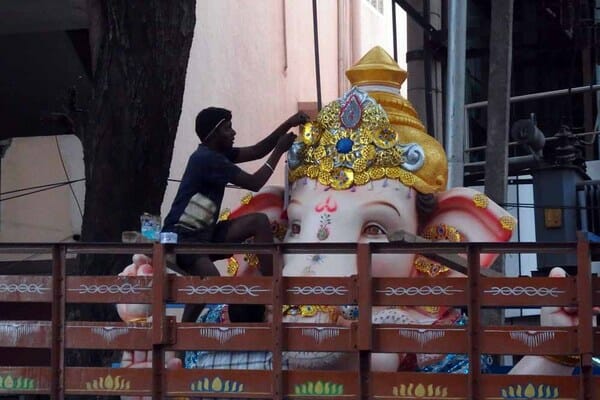 The Ganesha was already on the truck, ready to leave, but was getting it’s finishing touches before departure time. 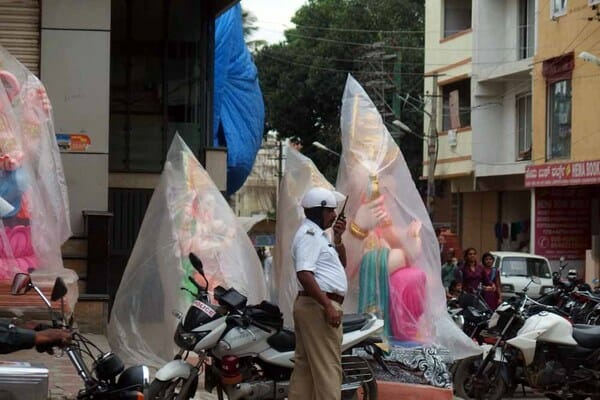 The two-wheelers usually park anywhere. Today, Ganeshas sat anywhere. The street was as much theirs as anybody else’s. The Policemen had to ensure all went well. 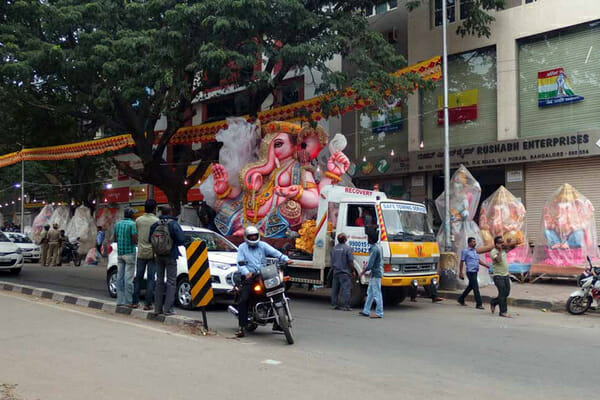 I noticed this one crane on the street. I wondered if there had been more in operation the previous night. And, how long had it taken for so many Ganeshas to be brought here to VV Puram? I learnt later from an autorickshaw driver that the large Ganeshas are not made in Bangalore, that they come from Mumbai or Kolkata. 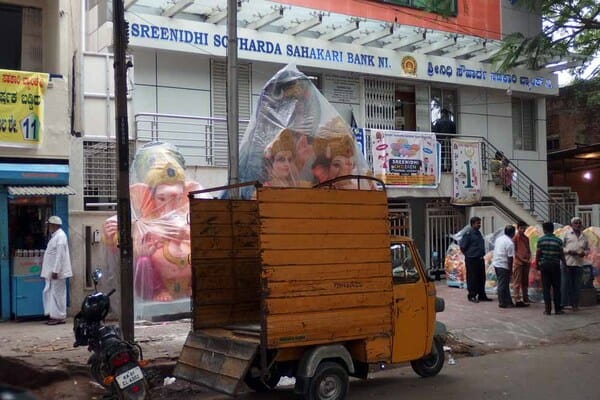 Would we ever be able to plan our streets for every festival in the year? It seemed best to be able to “adjust”. The streets in Indian cities – they must be the most adjusting and adaptable. And, the people. The most tolerant. 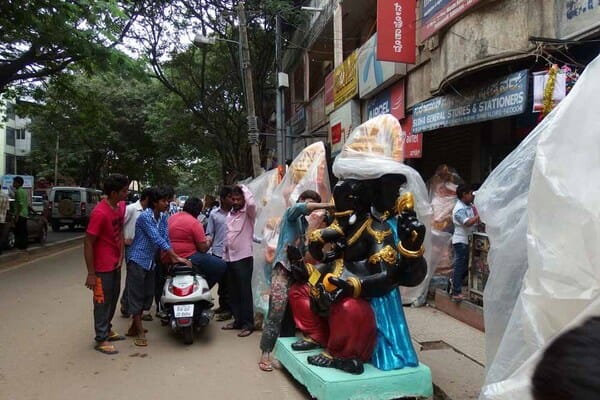 Yet another artist touching up a Ganesha before it is ready for dispatch. It will leave soon and on arrival in it’s destined neighbourhood receive all the attention of devotees for the remaining part of its journey.

Years ago, I had gone to Pen, near Mumbai where many Ganeshas really begin their journey. I had wondered then about how to bring more people to Pen to see the artisans at work at these Ganapati Karkhanas. That had been a wonderful experience many years ago as this was today here in Bangalore. And, last year, it had been the Ganesha bazaar at Malleswaram where we had walked on a sunday evening amidst crowds of people experiencing how neighbourhood bazaars transformed during festival time. Something we often take so much for granted is the vibrancy of streetlife in India. In other parts of the world, conscious effort is made by the governing and planning authorities to make streets better places. Maybe, reading the Streets as Places proposed by Project for Public Spaces would make us realise how there is streetlife in India that others would so aspire to have. Whilst we need to learn how to make our cities more efficient, we do already have some things that others can learn from.