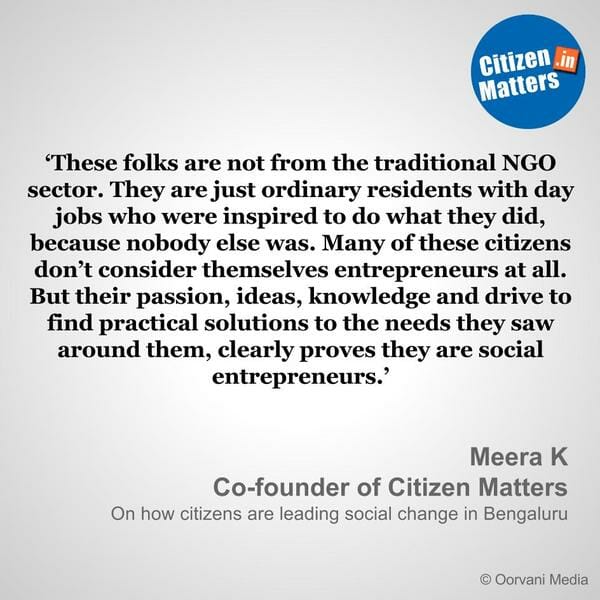 Some start their own enterprises because they want to be independent. Some have dreams of making it big. But some end up being change-makers, because they wish to see some problem solved, the kind nobody else was trying to fix!

To be honest, I hadn’t planned to become an entrepreneur. Post 2000, I started noticing the growth pangs of Bangalore. The once-nice town was indeed becoming messy, garbage-ridden and traffic-laden. And I wanted to understand why. Why did the darn flyovers take years to build? Why did the garbage collection break down? Why did we have to depend on water tankers?

Having seen local and community news media in other countries exploring such topics, the time seemed ripe for a local media that could answer the why and how of city issues, backing it up with solid data and documentation. That led to the idea of Citizen Matters, which I co-founded in 2008 and is now recognised as a pioneer of community journalism in India.

Our hybrid model of complementing professional reporting with citizen voices, supported by data and documentation is now well established in Bangalore. In addition to the online audience, a fortnightly print edition with 36000 copies reached two hyperlocal communities during 2009-2012 and established Citizen Matters as a trusted and credible news source. We found readers cared about local news and there was good reception for our in-depth articles, especially guides and explainers about citizen services.

Having started out as a for-profit venture, we found some VCs skeptical about the scalability of the operation. However our idea has always been about replicability – every city or community deserves its own citizen-oriented media. That was why we setup the non-profit Oorvani Foundation in 2013 that funds such award-winning journalism, and plans to collaborate and support such initiatives in other cities too. Good community journalism is clearly impactful and makes a difference in people’s daily lives.

One of our earliest citizen stories was about a resident questioning the local government’s approach of acquiring properties for widening roads, when she found her property was marked for acquisition. This article and subsequent followup pieces by staff journalists informed citizens on what was going on. The coverage helped the topic enter public discourse and influenced many citizen groups to take positions and even pursue legal options.

From the very beginning, Citizen Matters took an active interest in people who were taking ownership for positive change, trying to make a difference in their communities or looking to do something about problems that plagued the city or their neighborhoods. We made our platform a space for their voices, sharing their experiences and learnings. This in turn inspired others to get involved or replicate the initiatives in their own neighborhoods.

This really was the best part of running a community media operation — the chance to meet hundreds of proactive citizens, whether they were saving a lake or ensuring sustainable waste management. They had a clear vision of what can make things better and creative ways of implementing those ideas to solve problems.

As we were building our media operation, we saw citizens build their initiatives. And in their approach, I saw the same entrepreneurial zeal. Their work has made so much of a difference to Bengaluru.

Many of us don’t start because we feel as individuals we cannot make a difference. And often, it is not about funds, most tasks will be done by volunteers. And even before we start, we are scared of running out of bandwidth. Sometimes all it takes is those first few steps, some like-minded people, some persistence, and in the blink of an eye, a few struggle-filled years would have passed. When you look back, you are sure to find whatever you did, had an impact!

In southeast Bengaluru, a few citizens started by petitioning the government to fix the problems plaguing a lake in their neighbourhood, affected by sewage inflow and encroachments. Over the next few years, they got the local government to sanction funds for rejuvenation of the lake and even worked together in creating a sustainable plan for restoration. They set up a non-profit, called MAPSAS, which has now tied up with the local government to maintain not just that lake, but seven more lakes in their neighborhood!

Another team initiated waste segregation in their neighbourhood. Starting with a handful, the initiative spread to over 70 apartments; Kasa Muktha, Bellandur has literally expanded to become a Kasa Muktha Bengaluru team! They are rolling out sustainable waste management processes in layouts, offices, commercial areas, schools etc. They created an easy to follow process, invented a catchy slogan (2 bin, 1 bag), tied up with retailers to push colour-coded bins, and used social media to spread the message virally. The team is now taking this to the next level, connecting to other organisations in the space to form a coalition to push for sustainable waste management policies at the city and national level.

All these initiatives needed vision, planning, strategy, team building, perseverance, fundraising and that bit of luck.

Then there is the classic example of The Ugly Indian. From process design to marketing innovation, there is much one can learn from them!

Some of these examples showcase achievements that most people had considered impossible. These folks are not from the traditional NGO sector. They are just ordinary residents with day jobs who were inspired to do what they did, because nobody else was. Many of these citizens don’t consider themselves entrepreneurs at all. But their passion, ideas, knowledge and drive to find practical solutions to the needs they saw around them, clearly proves they are social entrepreneurs.

At the next level, local problems have now inspired socially-oriented startups looking to provide services at the grassroots, from managing waste to installing rainwater harvesting systems to green event management. Biome, Hasiru Dala, Kabadiwala, BinBag, Stonesoup etc. are some of the names that come to mind.

There are many such opportunities – organise fundraisers, provide organic garden service, start a quiz circle, refurbish computers for donation… What are your skills? What will challenge you? What gives you a kick?