When I read that “The Cut” had been shortlisted for The Hindu Playwright award in 2016, I was keen on watching it; so off I went to watch the play, staged by Theatre Nisha, a Chennai-based group, on Saturday, 27th May 2017.

I was expecting the sepia tones referred to in one, and the brilliant performances mentioned in the other (see photo below, from an earlier performance.) 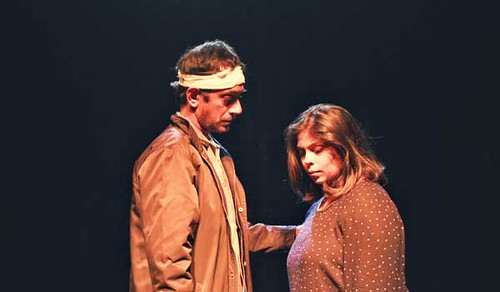 The play is about two people, and their relationship in the midst of the horrors of war. One is a “comfort woman” forced into gangrape by soldiers in a war, and a country, that could be anywhere. The other is a soldier who’s also a doctor, treating the wounded men. As Meera Sitaraman, the playwright, has mentioned in an interview, “It was suggested as a short script by Balakrishnan (the director, who also plays the man in the production) for the Short+Sweet Festival ,2014. He was at the time, in Korea working on an Indo-Korean play. It is inspired by the true stories of Shofu slaves of the World War, but has been fictionalised to fit any conflict zone.”

A woman, a man and a girl (deliberately left unnamed) are the three main protagonists. The older woman, herself a “comfort woman”, gang raped and abused by the soldiers, is now with a doctor who has made her his “exclusive”, and so allows her to have a room to herself, a step up from the “virgin” and “shared” rooms. She finds emotional solace in the man; indeed, she says, she doesn’t want the war to end. Her home was destroyed, her family killled; this is the greatest security she has known till now, in spite of the pain and trauma. The older women are given “cuts” to prevent them from getting pregnant, and the younger ones are given the pill. If, in spite of this, any of them get pregnant.they are thrown out. In case any of them try to use this as a method of escaping the camp, their eyes are gouged out.

However, she also hides a young girl who has just arrived, in her room. She does not want the girl to go through the same horrors, and hopes to somehow get her out of the place. When the soldier-doctor is granted leave, and also discovers the young girl, she is torn between dread about her own future and her wish to save the girl. The man says he can take the young girl and save her; the young girl and the woman both plead with him to take them with him, and he says he cannot do so. The quick climax follows.

The costumes, as well as the simple props on the stage (a chair,bottles and food on a table, and a cupboard-like structure where the girl was hidden during the soldier’s visits) were the usual articles found in everyday life.

The lighting and the sound/music of the play were excellent. When, after a year of a non-physical relationship, the man and woman finally have sex which is loving, instead of the usual transactional intercourse, there is, in a subtle reference to the woman’s situation, a red light shining on them. Throughout the performance, the areas except centrestage were dark, referencing the darkness in the lives of those in the war camp. As one of the main protagonists, the director was, obvioulsy very involved at every moment of the play.

It is very unusual to have to separate the play, the script and the dialogue from the production, but that is what I had to do. I found the script very moving, evoking the horrors of war and the sufferings of women caught up in it; the conflict in the soldier’s mind, between affection and duty; the desperation of a young girl, who is not even sure what is happening to her, but only knows that she wants to get out of the situation.

It was subjective, but I could find the great performances that were mentioned in the staging of this show in January of this year. I felt that the dialogues were being woodenly recited, in a monotone rather than with any inflections, and initially thought that this was because the concept was that horrors of war might be better evoked by declaiming without emotion. But for the 60-odd minutes that the play lasted, we as an audience could never be drawn into the characters. Even the denouement was flat and without any, sorry to use the word, drama. Without an emotional involvement in the action on the stage, I felt curiously detached, and the play left no deep emotional impression on me. I could appreciate the play; as a production it lacked conviction.

However, I wonder if my friends and I were the only people who felt this way. The venue had about a half house for the afternoon play, which was quite good. (The play had 3 shows, Friday afternoon, Saturday afternoon and evening.) As we trooped outside after the play, I met my friend Nagaraj who said he’d watched the play the previous evening, and quite liked it.

Again, neither the cast nor the crew were introduced, and this produced further confusion when I read the brochure given out by Theatre Nisha. I understood that V Balakrishnan was playing the doctor/soldier, and Janani (I identified her from the photographs in the other reviews) played the woman. But the brochure mentioned three women, Janani, Roshini and Aparna. So who played the young girl, Roshini or Aparna? The audience never got to know.

Not being introduced to the cast or the crew (the brochure only mentioned technical support and did not assign credits for the stage design, costumes, lights or sound), we missed, further, the sense of involvement with the play, the script of which we were able to appreciate as a separate entity from its production.

The theatre group is now over 16 years old, so I am still unable to guage whether the deadpan delivery of the dialogue was indeed a deliberate method in the performance. Would I like to watch it again after a few months, to see how much further the production has involved? Or could I watch other productions by this group, to get a better idea of their work? I am mulling over this point now. I would certainly have liked to meet the playwright, the director or the cast..but that was not feasible, either.