It is always interesting to revisit a play I have watched before, and see how the production has evolved. This was the spirit in which I went to watch “Robi’s Garden” by Bangalore Little Theatre, which I had reviewed in 2011.

(You can read the review

But I was in for a major surprise! The earlier play was definitely one for children, with many children and BLT volunteers participating, with both the cast and the audience having a merry time, rollicking through a selection of Rabindranath Tagore’s short stories. It was an occasion to celebrate the Golden Jubilee of the Association for the Mentally Challenged (AMC) as well as the 150th year of Tagore.

This time, the occasion was equally memorable. BLT is celebrating the fact that 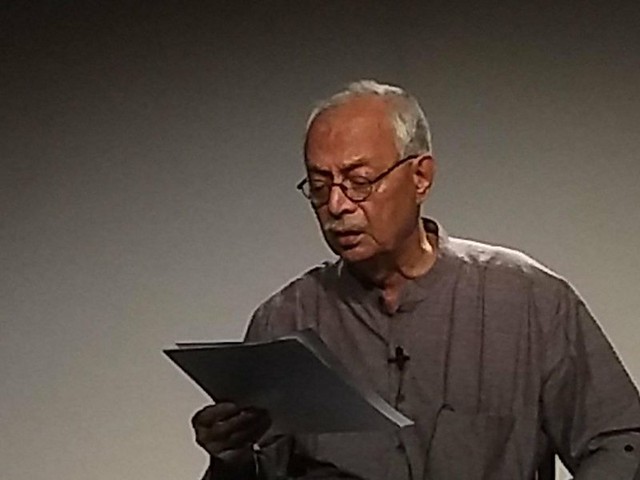 turned 80 a few days ago, and BLT is putting up a series of events to celebrate this landmark of the doyen of theatre in Bangalore. So the focus was now Vijay Padaki, and the play took on an entirely new look.

Instead of the big cast of characters, we had just two on the stage: Minty Jain and Vijay Padaki himself; a table and two chairs, with some images being projected on a screen at the back of the stage, where all the props, the stage design being minimal in the extreme. The table was creatively used; it was, by turns, an operation table, and a deathbed!

The theatre experience was also completely different. Instead of a hall full of families and children, it was intimate story-telling theatre, in the small auditorium of Alliance Francaise, with a small audience sitting close to the stage ( I sat further back in order to be able to take photographs). The children who went to Jorasanko and met Robi da were now created in our imagination, as Minty and Vijay took the audience, once again, through a selection of Rabindranath’s work.

The experience of watching Vijay on stage is very different from seeing Vijay’s work as a director, or reading his work. His mastery of stagecraft was immediately apparent. He garnered the audience’s minds effortlessly and took them off to Robi’s Garden, populated by so many different people (not always human…for example, there is the tiger who wants to wash his black stripes off!). A clap of the hands brought on a new vignette, a look into another story, and the audience went on this roller coaster ride with the two actors on stage. Touches of humour, of satire, or gentle poking at blind customs and rituals…all of Tagore’s view points were well elicited in the smorgasbord of tableaus.

The costumes were simple: pyjamas and kurtas, with colourful waistcoats, that added bright dashes of colour to the stage, and brought the audience’s visual focus to the actors. The narrative was interactive in that at one point, two children were called up to the stage and included in the performace. 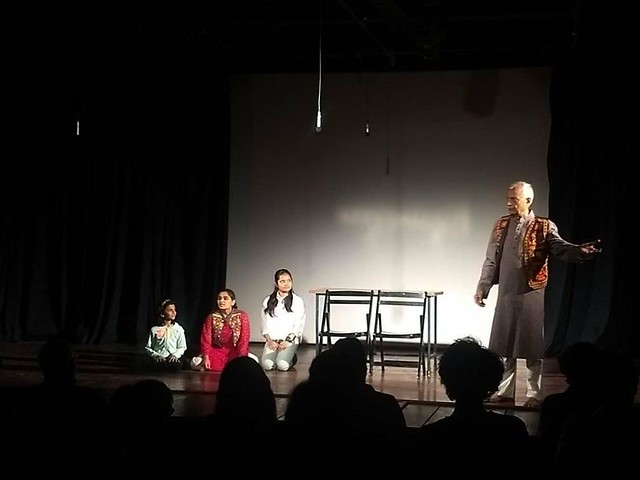 Vijay and Minty with the children from the audience. Photo: Deepa Mohan

The lighting and the sound contributed well to the effects of the play, but it was definitely the cast who carried the burden of the performance on their shoulders. A few lines were fluffed, but the action quickly carried on. A ten-minute interval was declared.

It was at this point that I clearly understood how an external factor can affect the playgoers’ experience. My friends and I had left south Bangalore before 5 pm to battle the traffic and reach Alliance Francaise; when the interval was announced, we realized the there was no canteen and that we could not get anything to eat. We waited through the interval, and enjoyed Vijay’s reading of the play, “Anklet”, where he single-handedly brought the story of Malati, Damodar, and Devi alive.

But when, at 8.45pm, he asked the audience if he could do another reading and then a short piece from Tagore, we just could not wait any longer, as we also had a long drive back home through the traffic. We had to walk out, a piece of disrespect to the theatre and the artiste that we regret deeply. I personally wish Vijay had done the short piece first and the long story afterwards, at least we could have watched that. But those in the front rows opted for the long story and we had no say in the matter. As it was, it took us more than an hour to get home.

I think that every theatre venue should defintely ensure that there is some food available for theatregoers who come spending a lot of time and effort in the evening traffic, as otherwise, the evening is compromised. I have written before on the pathetic food situation at Chowdiah, with a few samosas and chai getting over too fast…it was one of the many reasons I stopped attending theatre events there.

I also wish that BLT had made the sequence of events clear to us earlier.There was no brochure available, and we had no idea how long the play, or the performance, would go on.

Another point which all theatre groups must observe is that of punctuality. The play started 15 minutes late; I find that all theatre venues except Ranga Shankara are not punctual at all, and seem to penalize the punctual members of the audience. Let me take this opportunity to thank Ranga Shankara for sticking staunchly to punctuality, in spite of often being reviled for it.

The net result was that we could not watch the evening of theatre (which we all came so far to enjoy) beyond a certain time, in spite of the excellent acting and production values, and the chance of watching a noted thespian performing. And if felt very bad indeed, to have to leave a performance before it was over, but we had no other option.

But we liked what we watched, and I am hoping that the rest of the celebration, “VP80” will have much more in store for theatre-going audiences of Bangalore.