Since I have enjoyed the work of

for many years now (you can read my review of another of their plays,

(written on a rainy evening exactly 5 years and 3 days ago!)

I looked forward to watching “remember Remember” by this young and talented group, on another rainy evening, (12 Oct ’17) and neither my friends nor I were disappointed. 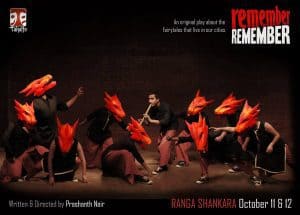 The play had a good house, too considering that it was the middle of the week, and the audience had braved weekday traffic and heavy rain to get to Ranga Shankara.

The assistant director in that production has now come into his own ( I will be listing all the names of the cast and crew at the end). “remember Remember” is a play about stories..but very creatively presented as a sparkling garland of themlike a string of lights that was worn by one of the cast: Watching An Audience Watching A Play, Zen Ten, The Gatekeeper of Secrets, Everybody Needs An Imaginary Friend, The Pied Piper Remembers, and The Woman Who Lost Her Stories.

It is a very difficult process to segue from one narrative to another, but this was seamlessly achieved. The cast started by suggesting that those in the audience who felt cold could hug the person next to them, and then asking everyone to join in a chant of “Nam Kum Bha” which also occurred later during the production.

From the first story, where the cast watched the audience watching them, they moved through a scenario where an app allows one to set back time by ten seconds (with the resultant perfection becoming cloying), a guardian who does not allow forgotten stories to escape and be remembered again (until he meets his own story!), a woman who meets her imaginary friends from her childhood and tries to come to terms with them, a different take on the Pied Piper, and wound up with a woman who has lost all her stories.

Several contermporary issues were touched upon with a sure hand, all the while leavening the context with a lot of humour. It was obvious that the cast had rehearsed very well; the comic timing was impeccable, and hoots of laughter from the audience greeted and encouraged the cast. I realize that there were several members of the audience who had either seen the play the previous evening ( a performance I had not known about) or were friends of the cast and crew…or both! But since the rest of the audience endorsed their support for the production, all went well.

I am very tempted to mention some of the one-liners that drew laughs, for example, when the woman complains to the policeman that she has lost her stories,her hopes, aspirations and ambition, he responds, “Oh, boyfriend ne dhoka diya hai kya?” (Did your boyfriend let you down?)…but as a reviewer, I have to mention several other things.

The excellent choreography of the production. The actors moved across and around the stage in well-executed movements and movement often melded into dance.

The bicoloured costumes of all the cast, very “contemporary ethnic” in design, giving, simultaneously, a uniformity and uniqueness to the characters. Sneakers, with ankle bells (gejje) which addressed my usual worry of how dusty performer’s feet get!

The lighting, which contributed in no small measure to the punch of the several stories.

The music, with excellent vocals (a playwright and director with a fine voice, too!), a banjo, djambes, a xylophone and a morching, all used to great effect. The songs “lag jaa galey” and “maay ri” were sung so hauntingly, that I almost “tuned” out from the narrative to enjoy the singing.

The very effective dialogue and the delivery by the cast. There was no fumbling or fluffing of lines that I could discern.

The props: various items of headgear, scarves, dupattas, brightly coloured wooden stools, wands, beautifully executed masks (bull, dragons and horse), green frames which stand as allegories for stories from various media, and even white bedsheets with holes for the eyes and mouth…all of them were used in very creative ways. What acted as a leash for the dragons became the waves of the sea, as well!

The superb stage effects.The duels between the guardian of secrets and stories which want to escape from limbo,with ribbons flashing in stunning spirals, and the dance of the dragons…the audience could happily have watched these with no play to support them at all!

The sound. The good acoustics of the Ranga Shankara space were utilized well by the cast and the 3-language dialogue (English, Hindi and Kannada) as well as the music were clear throughout.

The direction, the play and the stagecraft. It is always, to my mind, more tough to act in a play while directing it, and the deftness of the direction was apparent in its hardly being apparent. The play itself made telling points about such burning questions as one country (not named!) using its power to “inflict freedom on other nations”, the nature of reality (“everything from atoms to black holes, were considered imaginary,but that doesn’t mean they were not real”), and telling transposition of words (“I have things to meet and people to do”) and existential questions (“why choose to be a grown-up if it is so difficult?”) but never pushed too hard on it, ensuring that the audience continued to enjoy the play on a lighter level, too, laughing all the way. Certainly this spoke to the playwright’s perception that an audience which has come to attend a play after a hard day’s work might want to be aware of issues, but would not want to face them in all seriousness.

The brochure for the play was as innovative and creative as the play itself. Apart from all the information about the group, cast and crew, it was a treat to see a quote from the rehearsal, and a beautiful rendition of the origami folds of the dragon mask (put in “because this space was empty and our middle-class upbringing doesn’t allow us to waste it”).

After the play, several members of the group distributed sheets of paper where theatregoers could give their contact informaton, as well as feedback about the play. This is a great way of building a good database of those who are interested in the theatre group and who will come to attend future productions.

In short, a fine, professionally-produced and executed play, that I would very strongly recommend. Tahatto will be giving performances at Atta Galatta on 28 and 29 October 2017 , and at a later date, at Jagriti in Whitefield. 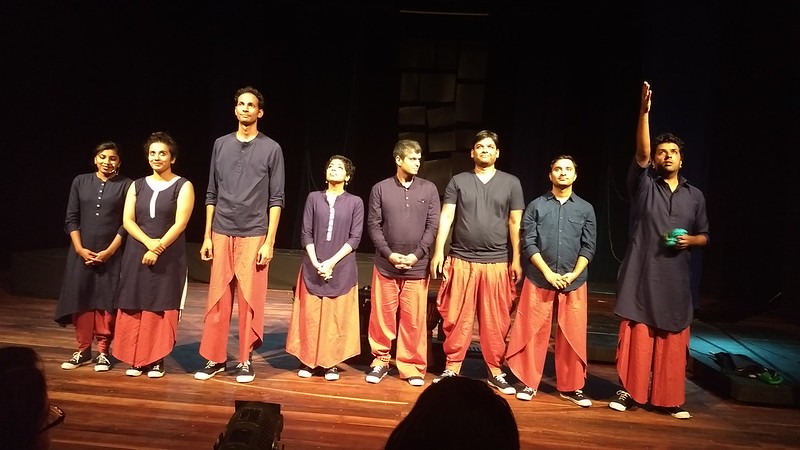 To echo the last sentence of the review I mentioned above…way to go, Tahatto!

Written and directed by Prashanth Nair