When one goes to see a play,one goes with certain constructs; one, that there will be a linear narrative, that one may be entertained while also made to think, and that one will connect to the action on the stage.

But recent visits to experimental performances have made me realize that all of these may not happen at some performances, and it was in this frame of mind that I went to watch “RamaNaya”, by Sandbox Collective, at Ranga Shankara, on Friday, 9 Feb ’18. The play drew quite a good house for a Friday evening, especially when it had been raining hard for a while. (Walking through the raindrops to Ranga Shankara was a real treat for me!)

It is rather ironic to say that there are constructs in experimental theatre, but certainly the ideas of having an introduction to the play as part of the play itself, and having self-referential dialogue where the actors are playing themselves rather than their roles, are something I am seeing often at performances.

“RamaNaya”,too, began in this way, with an introduction to the “mind-map” of the Ramayana (the “naya” being, presumably, a pun on the newness of the interpetation). 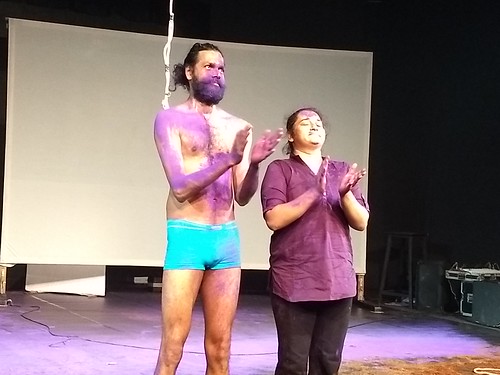 who were the two members of the cast, chatted back and forth informally while introducing the concept, drawing a few laughs from the audience They described how the action took place in the four quadrants of city (where Sita and Rama ruled), the island (where Ravana ruled), the forest (where Sita and Rama lived in exile, and sea (which Rama had to cross to rescue Sita). However, they quickly moved into the “action” of the play when Puja kept acting the part of the golden deer and Vinod, angered by her distraction, shot her.

Being a fairly traditional theatregoer myself, I was still trying to relate the carefully synchronized choreography, the release of three rope-pendulums weighted with old newspapers, and the use of videos on the two back screens, with the old epic, and found myself floundering.

From this point on, as the brochure said, the play became surreal. Using multimedia videos, points and rays of bright light, eerie music and percussion, sudden explosions, and lithe, acrobatic movements across the stage, the two actors followed their mindmap.They acted as characters from the epic, as themselves, as monkeys, or exchanged roles;they spoke, recited, laughed, cried and sang.

Several sequences left me confused and unable to link them into a narrative; perhaps this was the end result of the surrealism, as the play progressed in ways that might have been unexpected even to the cast. Perhaps some space was left for improvisation, while some of the action was scripted.

There was one sequence where, after a whispered argument at the side of the stage and behind the screen, Vinod disappeared, and Puja tearfully explained how they were about to stage the rest of the play, and how she missed the absent actor. This self-referential sequence broke up the fictional narrative, but it was rather puzzling to me.

However, it was impossible not to admire the stagecraft. Most of the props (stage properties, to give it the proper name) were made from recycled material, or junk that had been salvaged. I wondered if the earth that fell on Puja when she fell, ostensibly dead, on stage the first time, was a reference to Sita being the daughter of the Earth; but I soon stopped trying to link things up in my mind, and just watched. The director’s intense interest in mythology had obviously spawned this production, and the decision to make it a surreal experience was also his. In this vision, the cast and crew worked with him a seamless unit.

The technical aspects of the show, and the direction, were certainly excellent. When the ropes with newspapers swung over our heads, or the waxing and waning moon, moving across two screens full of stars and trees, suddenly exploded…When the two actors made a silhouetted figure that moved in the darkness, with sharp beams of intense light criss-crossing…I was certainly mesmerized on the sight and hearing fronts.

The music enhanced the eerie and surreal atmosphere, and was very effective in keeping me in a state of tension. Both the actors had beautifully modulated voices; their singing was haunting. Colour was part of the visual experience, with Puja, at one point, showering Vinod with “gulal” (coloured powder) and then throwing it out in a cloud of purple. “What next?” was constantly on my mind.

I mentioned that I watched passively; this happened because as an audience, we were waiting for some cue from the actor to make the production interactive, as the write-up in the foyer told us the performance would be. In the absence of such a cue, though, and a lack of understanding about what was happening, we remained in our seats, and the audience interaction, after the first few minutes of the play, never happened at all.

The directorial touch was light and it was obvious that the actors also had leeway in how they acted, or reacted. At one point of time, Puja was taking cues from the third person on stage, who was on the laptop, co-ordinating the special effects.

The lighting was at all times dramatic, using both light and darkness to great and dramatic effect. There were times (as during the argument between them) when the actors were completely off the spotlight and in the dark.

The play wound up with Vinod reciting a poem called the Boatman’s Song, beginning, “The boatman returns home to the silent stream…” and as the lights came up and the actors took their bow, the crew also joined the cast. However, I would definitely have appreciated it if they had been individually introduced. Vinod had mentioned some names in his introduction, and though I am not sure about the spelling of all the names, I will list them all at the end, as I usually do.

There was no mention of any talkback session either, so the audience filed out. I talked to some members of the audience and the general consensus seemed to be, “Yes, it was surreal, and it made us think…but we want to get some coherent narrative from the play, and could not do so.”

“We were in the dark, literally and figuratively,” said Raji Hari. Jayashree Govindarjan added that she was still wondering how to interpret the depictions. “There were lot of props used and also special effects; the music was effective, but seemed like it all got lost somewhere while they tried to link it together,” she added.

Perhaps, I thought, this is what was intended…that we think about the play. But I certainly wound up thinking more about the production and its techniques, rather than any message that I was getting from the content of the play itself.

After a few hours, as I reflect upon the play, I feel a sense of its still being a work in progress, and one which might benefit from some editing of the multimedia sequences. Padma Ramaswamy felt that these sequences could have been effectively shortened. Perhaps it was the intention of the playwright (also the director/choreographer, in this case) to make us reflect and consider all these aspects, but as an audience, I think we are still conditioned to watch the final effect of the play rather than consider the aspects of its production and possible meanings.

I also feel that a brochure would have helped the audience considerably. Leaning over a wide floating-flower arrangement in the foyer was not the best way to read all about the interview or the details of the production, as they appeared in the “Hindu” and the “Times of India”. Though this was announced to be a premiere, the write up did mention an earlier performance on Feb. 5 at Chennai. 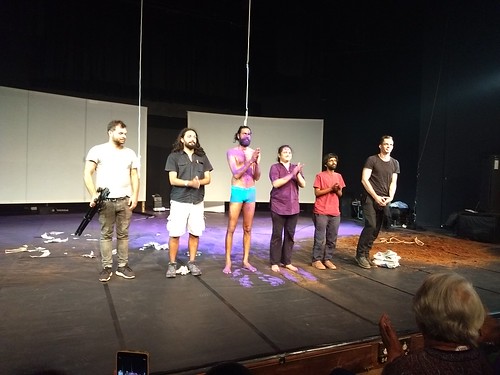 The cast taking a bow after the performance

I would probably like to watch a future peformance and see how this production has evolved, and whether any elements have been added or taken away, to enhance the end result. If anyone has feedback after watching the other two shows, that would be a welcome addition.