Once a year, Children’s Day (celebrated on Nov 14 in India) comes around, and we have many initiatives just for them. One of these was

a story of mythology and fantasy, which was made into an epic movie in both Tamil and Telugu. 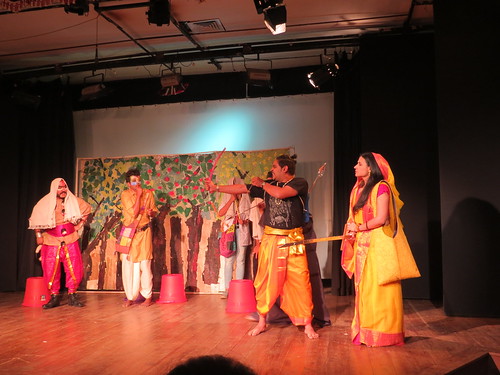 Over the years, this story (loosely based on characters in the Mahabharata) has been treated as a subject on many stages…folk, street, and mainstream theatre.

sent an invitation to the staging of the original English language adapation  of this tale, on the 13th of November, 2016, at the National Gallery of Modern Art (NGMA) I took my 7-year-old granddaughter Kavya and 3-year-old grandson Kalyan to see it. This show was free to the viewing public. 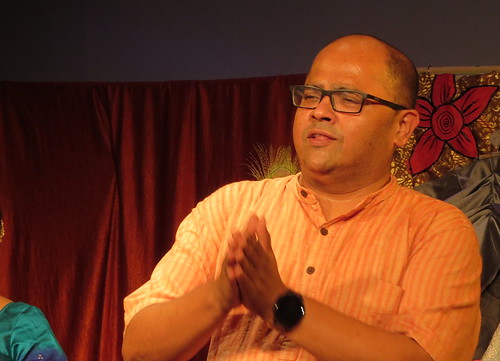 The story of Maya Bazaar is too well-known for me to repeat here; the love of Shashirekha and Abhimanyu, which Duryodhana and Shakuni try to thwart, and which Krishna brings to a happy conclusion through some chicanery, and the help of Hidimbi’s son Ghatotkacha, is a fun story, and the fun element was predominant in the production, which is set in Dhandakaranya and Dwaraka. 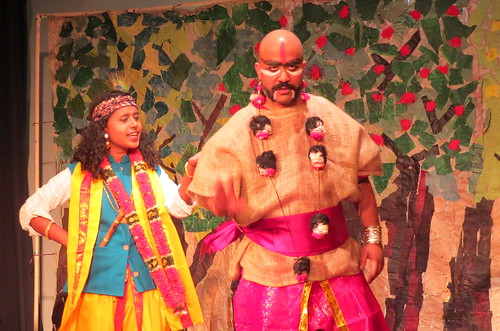 True to the nature of the play, one could see many different elements added to the story. Some of the characters wore the old-style clothes of yore, with crowns and jewellery; Shakuni appeared in a modern suit with a large gold chain around his neck. Two characters called Sambhav and Asambhav were introduced. And so the merry muddling went. The common thread in this version was a bird which has to post a letter! With a multicoloured, beribboned tail and a painted face, he was a hit from the very first scene.

The costumes were extremely colouful, and lent a lot of appeal to the proceedings. Two backdrops,  both, I think, created by the members of Bangalore Little Theatre, formed the setting on which the action took place.

Props were varied; buckets became thrones, actual arrows were delivered across the stage by people who played arrows (sometimes talking, too!) plywood swords with silver paper stuck on…volunteers, and sometimes the cast themselves, helped to set the props on stage and later remove them 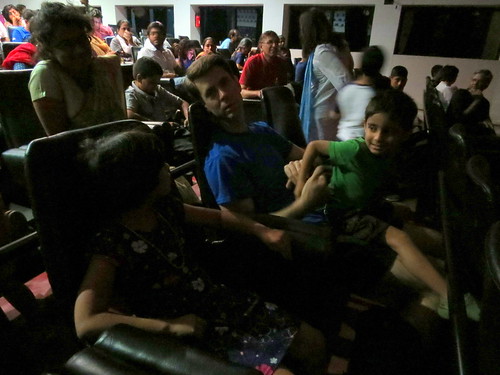 One of the big pluses was the sound system, which ensured that the dialogue and delivery was clearly audible throughout the hall. When the characters on stage made a lot of noise, the children in the audience did not feel inconvenienced; they were a part of it all. 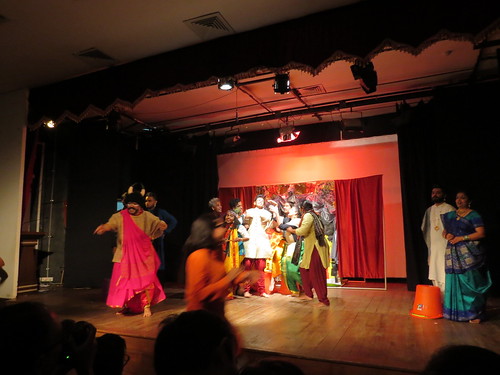 Some topical references, such as to the money travails the country is facing now, drew laughs from the adults in the audience as well. The trademark song of the Tamil and Telugu ,movies (you can watch the video of the original here was also reprised in English for the audience which contained people from all parts of India.

The lighting was also excellent, even highlighting Abhimanyu exclusively at one stage, and leaving portions of the stage dark at times so that props could be changed.

The show wound up with the whole cast singing of the various things one must do, and ended with the English version of “Peace…peace….peace” that ends the famous Sanskrit sloka. 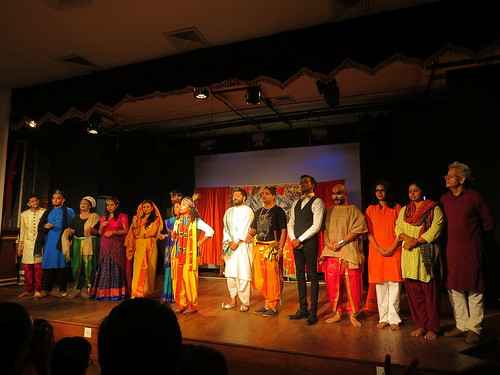 Since it was all a medley of fun, there was no brochure, nor were the cast and crew introduced. This, I think, would have taken too long, as there were so many people who had a hand in staging this event. The umbrella term, “staged by Bangalore Little Theatre” covered it all.

There was no doubt about the delight of the audience, but as an adult, I do have some nits to pick. It was heartening to see Shashirekha speak up as an emancipated woman, but the stale “marriage” jokes about her parents at the end, and especially Abhimanyu’s statement, “I won’t call you rakshasa, I will call you rakshasi”(with its assumption that the male spouse will be the one to pass judgement upon the other half), grated on my ears a little. CLT, you could cut those out!

Also, perhaps if the running time could be shortened to 90 min from the present 100 min, the narrative would be a little tighter, with a little less of slack.

Still, as the play was just a fun-and-fantasy production, even small mistakes and stumbles in the dialogue delivery,  passed muster  in the general good mood of merriment.

The play will be staged at Alliance Francaise from the 17th of November.  No matter what your age, do go and see it for an evening of entertainment!