There are times when the production of a play makes the task easy for the reviewer. When there are plenty of criticisms to be made, it always grieves me to have to make negative comments, when I know that each stage production has so much of passion, dedication and sheer hard work that has gone into it.

But when a production is, from both artistic, aesthetic, and technical standpoints, excellent and highly professional, the critic’s task is just to enumerate the good points.

The play, “Krishna’s Dairy”, by Jacob Rajan, who also essayed the two characters who feature in it, was one such piece of theatre that deeply satisfied those who watched the show at Ranga Shankara, on Wednesday, 16 November 2016. This play, which has won a Fringe First Award in Edinburgh, is now taught in the secondary school curriculum and in university courses in New Zealand. It was brought to Kolkata and Bengaluru, and will now go to New Delhi.

The play deals with that universal, yet particular phenomenon that one comes across in almost every land…the “Pop-and-Mom” shop, the little shop around the corner run by immigrant couples of families who have come to make a better living in a strange land, than they feel can be made at home. Gopi Krishan and his wife Zeena, who married him in his home country “because my parents told me to”, run such a shop, and nurture their little baby boy Appu. Krishnan admonishes his homesick wife to be friendly to the customers, as that, he says, is the edge they have over the large chain stores. Zeena keeps telling the baby the story of Shah Jahan and Mumtaz Mahal…and slowly, that immortal love story gets entwined into the narrative of the story of the love between Krishnan and Zeena. 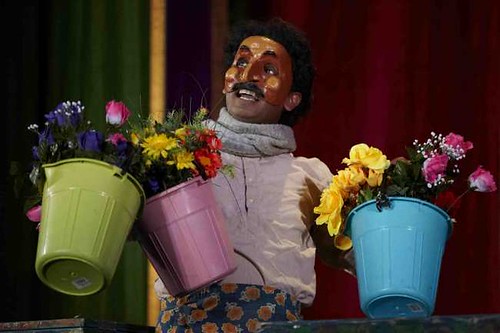 Various incidents highlight, and mar, the couple’s lives; some petty cheating by customers results in Krishnan’s having to return too much cash as change. When a small thief runs away with goods without paying, Krishnan says he had to chase “6 hours of my life” that he spent earning the money, down the road, and got insulted by those 6 hours.

I will not reveal the sudden and shocking denouement, because though, in hindsight, I feel I should have expected it, I yet did not. But throughout the play, I was deeply admiring of the quality of the production on many levels.

Let’s start with one of the props or costume element…a mask The actor used several masks. And these masks have to be talked about. Each of the two characters was delineated by the actor’s split-second change of masks, to show Krishnan or Zeena. Then came the royal blue, peacock-feather bedecked mask of Shah Jahan. And in the most surprising way, the face of  Mumtaz Mahal appeared too.  (The  photograph below shows how it was done.) 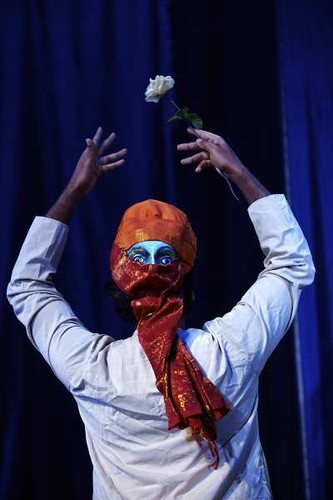 Masks by their very definition, preclude a person’s facial expressions and emotions from being seen. In that sense, these masks, covering, as they did, half of the actor’s face, were the very antithesis of the usual face-coverings. To emote through a mask is a feat in itself; but the design of the mask were such that the actor could express a full range of emotions through them, and he did so with great command over his facial expressions. Justin Lewis, who did the jobs of both mask construction and direction of the play…take a bow for both!

Which brings me to the direction. I always maintain that the best direction in any form of the visual fine arts is that which is hardly visible or tangible, and so it proved in this play,too. Of course, an actor who has also written the play, and is the only performer on stage throughout, has a great command of the play, but the directorial touches were sure and subtle.

To act continuously, shifting characters, dialogue and voices, for over an hour, can be an exhausting task, but there was great professionalism that was brought to it. Even the mime parts of the play, and the comic timing, which reminded me very much of the silent Charlie Chaplin movies…or the Kathak-like poses of the emperor Shah Jahan…were executed flawlessly. Jacob Rajan moved seamlessly from the shuffling of a  shopkeeper to the femininity of his wife, to the proud bearing of a Moghul, to the grace of Mumtaz Mahal, even as she lay dying. He finally became the baby Appu, grown up, and helping his mother in the shop.

The props and the stage design were simple yet effective. A shop counter top, a set of shelves where “cut flowers” were displayed, a doll that represented the baby (how natural was the way in which the baby was picked up, coddled, and played with!) and it had a rocker and a huge watering can came into play now and then. The background was formed by several colourful sarees stretched across the vertical space…and this too came into its own on occasions towards the end of the play when, instead of being opaque screens, they became translucent windows into the Krishnan’s bedroom, or showed the musicians.

The comedy part of the play was also impeccable. The repartees, the various returns to some punchy lines…all of it was carried out well.

The costumes that the actor wore were also well-designed; a scarf, an apron and a kurta-pyjama were enough to evoke the various characters.
The lighting, too, complemented the other technical aspects in being, to use a pun, “spot on” At the right time, the colours changed; the highlights were used and the high point of the play was truly a shock to the audience.

Separate mention must be made of the audio part of the play. The ringing of the cash register, and the comic situation with the drawer opening and closing; the counting of coins, the haunting music of the singing, accompanied by the guitars…all of it was brought to the audience without any loss of clarity. The sound design was a very big part of the play’s success.

Even if I had not watched the play, if someone told me that Jacob Rajan and Adam Ogle, who played the guitars (Jacob sang the beautiful lyrics, with  the last one where nursery rhymes were threaded through) were playing somewhere, I would go to hear them! Their guitars truly sang. I do not know who did the humming after the denouement, but it was quite haunting too.

I also enjoyed the fact of having a very well-designed and printed brochure to refer to, so that after the play, I could see who the crew were, and how they contributed to the play.

So…everything was excellent…could I find fault with anything? Oh yes, to balance the praise I have heaped on this production…when an audience has sat through the play, I am sure that it would like to be introduced to the crew as well as the stage performer. We were not given this opportunity, and I would ask Indian Ink to rectify this omission at further shows. I certainly would have liked to see the director of this production!

I spoke to some members of the audience after the show, and they, too, were uniform in their appreciation. “The masks were simply amazing,” says Sarrah Reshamwalla. “I also liked the way the sounds of the cash register made it appear as if there was an actual cash register there,”  adds Adnan Raja. Tia Thomas, who took a break between exams to come and watch the play, says that the play was entirely worth taking time off!

So, if you find this, or any play, by the New Zealand theatre group, Indian Ink, which promises to “open mouths with laughter and slip something serious in”, do go and watch, for an evening of superb theatre.