It was like a rare alignment of the planets: several factors come together to pull me out of my usual Ranga Shankara ambit for watching a play.

I had not been to visit Bangalore International Centre, which opened a while ago in Domlur; Bangalore Little Theatre, as part of their “VP 80” festival, was staging “Credit Titles”; the play, written by Vijay Padaki, whose 80th birthday the festival marks, was based on a story by Vinod Vyasulu, an eminent economist whom I’ve known for a long time, as our daughters share a cose friendship dating from 1988. And last but not least, my friend Raji Hari was going to see the 3.30pm show on Saturday, July 20, 2019. So off I went to visit the Centre, and watch the play.

The Centre is a beautifully constructed building, full of indoor/outdoor spaces, airy rooms and several levels of areas that can be hired and used for many purposes; I even enjoyed the plants and trees there. Perhaps because it is still new, there was no canteen open for us to get a snack or a coffee before after the play. This is the second time my friend and I are attending a play at a venue where no food and snacks are available; it does make a difference to our theatre experience if, at the end of a long drive to see a play, we cannot have even a cup of coffee or tea before after it.

The 180-seat auditorium, an even more intimate space than Ranga Shankara, was well-appointed, and seemed to have excellent acoustics; we settled down to watch the play. I must mention here that at no other venue except Ranga Shankara have I attended productions that start on time. On this day, too, the play started twenty minutes late, with an apology for the delay.

The play has an interesting background; I will dwell on it here,because it involves another famous Bangalore institution. Both Prof Vinod Vyasulu and Vijay Padaki were colleagues at the Indian Institute of Management, Bangalore, and published work together, combining development economics and behavioural sciences. When Prof. Vyasulu wrote a short story about the question of intellectual property rights, mentioning that the Dunkel Draft international agreement might well be called the “Darkness Draft” because poor countries seemed to be in the dark about what such an agreement entailed, he asked Prof Padaki to convert it into a play. This was done, and the play submitted to the Hindu competition, recently instituted, for contemporary play scripts. Months later came the news that the play had won the award. 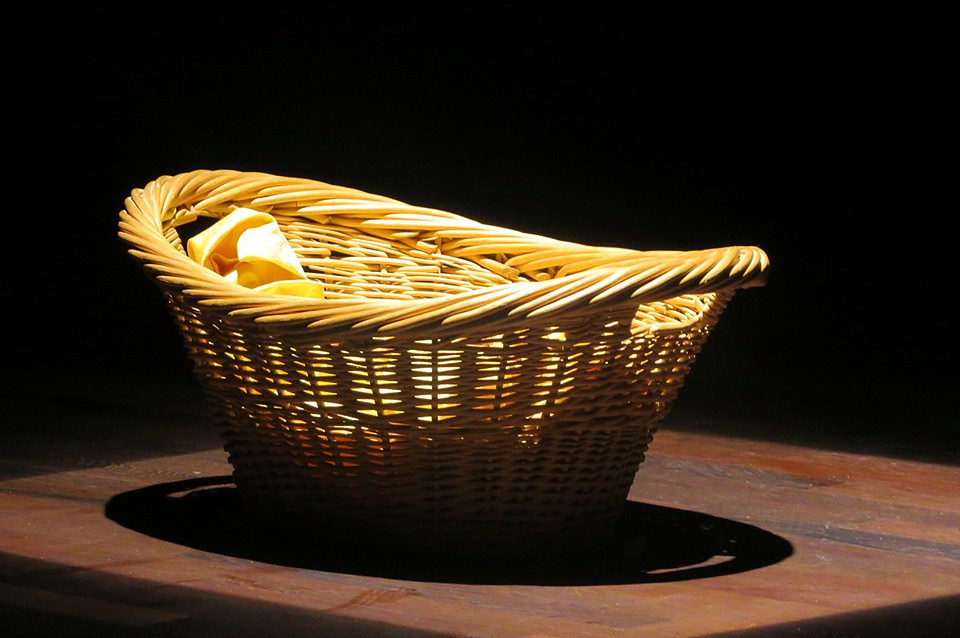 The cradle of contention.

The play deals with one of several important issues arising from the Dunkel Draft. It isthe ethical-legal question of patenting life forms. In other words: who does life belong to? A couple has a baby using modern technological methods, but the question remains about this DTT (Designer Test Tube) baby…whose baby is it? The prospect of high revenue from this baby, whose genes have been customised for intelligence and success, leads several people to clamour for a share in the pie; a judge has to adjudicate in a matter where the social and the legal aspects overlap and intersect.

The scenes depicting the various issues developing around the “issue” ( a pun on both the child and the issues that his birth bring about) were well done, and there were many moments of both humour and deeper meaning. The dialogues were very meaningful. The cast brought out the ethical issues well, through the narrative, which goes from the couple’s home, where a maid takes an active role in their lives, to the doctor’s clinic, to the court of law where everyone noisily demands a share in the child. At last comes the 18-year-old human being, Vijayendra, himself, and the denouement occurs. 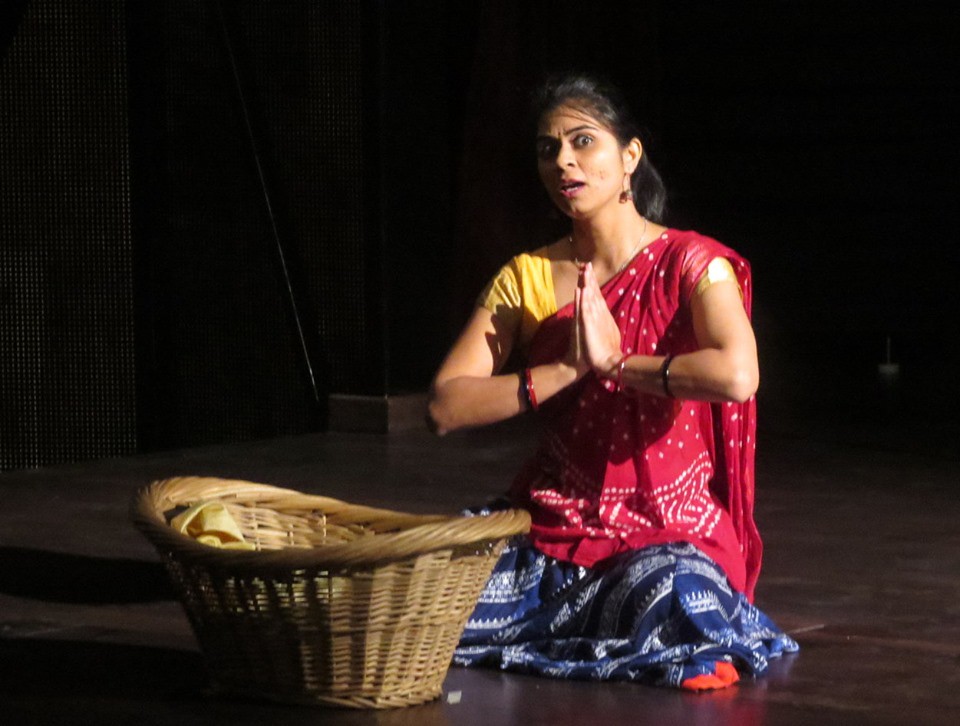 The sutradharini with the technological miracle baby.

The stage design was quite elaborate, with several screens, and parts of the stage depicting the couple’s home, outdoor spaces, and the law court. Several wooden boxes, painted black, served as seats, or turned into the judge’s bench in a versatile conversion. A deck of cards, with a card game proceeding, brought others of the cast into the action. There was a lot of self-referential dialogue, with the sutradhar being changed into a “sutradharini”, with a male sidekick for a change; they, too, wove in and out of the story, commenting on the development of the play as it proceeded. As is usual in such cases, the couple who wants a baby also consults a godman; the religious, spiritual, ritualistic and scientific steps to conceive a baby went hand in hand.

The sound design was the best part of the play. The acoustics in the auditorium were excellent, and the dialogue was clearly audible (alas, so were the occasional fluffs!) The audience had no difficulty on this front. 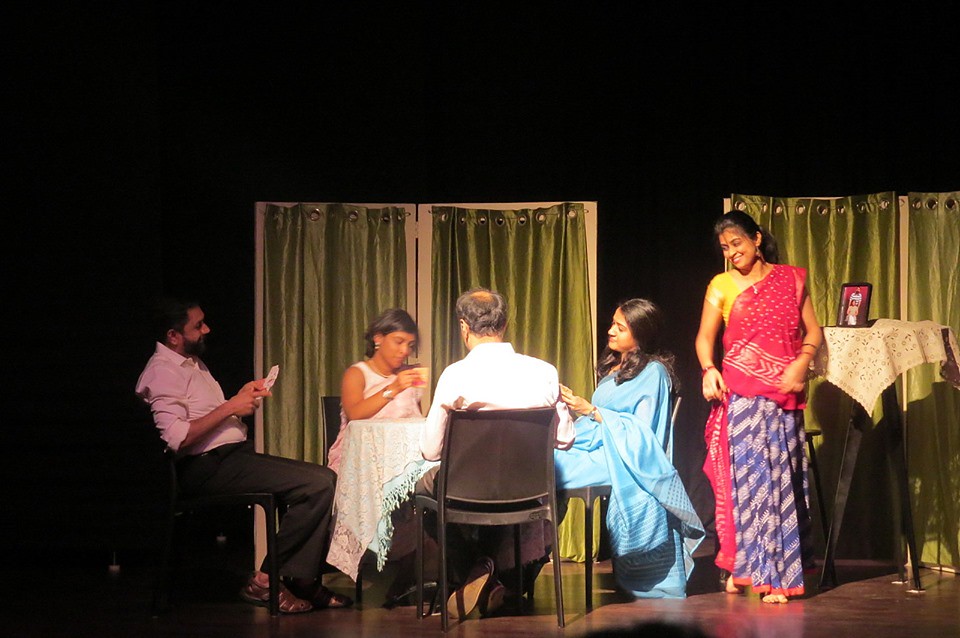 Much happens over a game of cards.

The lighting design did have some loopholes. Though, for the most part, the action of the play, and the characters taking it forward, were properly highlighted, there were times when the strong lights left a character’s face in shadow, even when that character was speaking. This is something that can be rectified by a member of the lighting crew sitting in the auditorium and watching the light effects carefully. 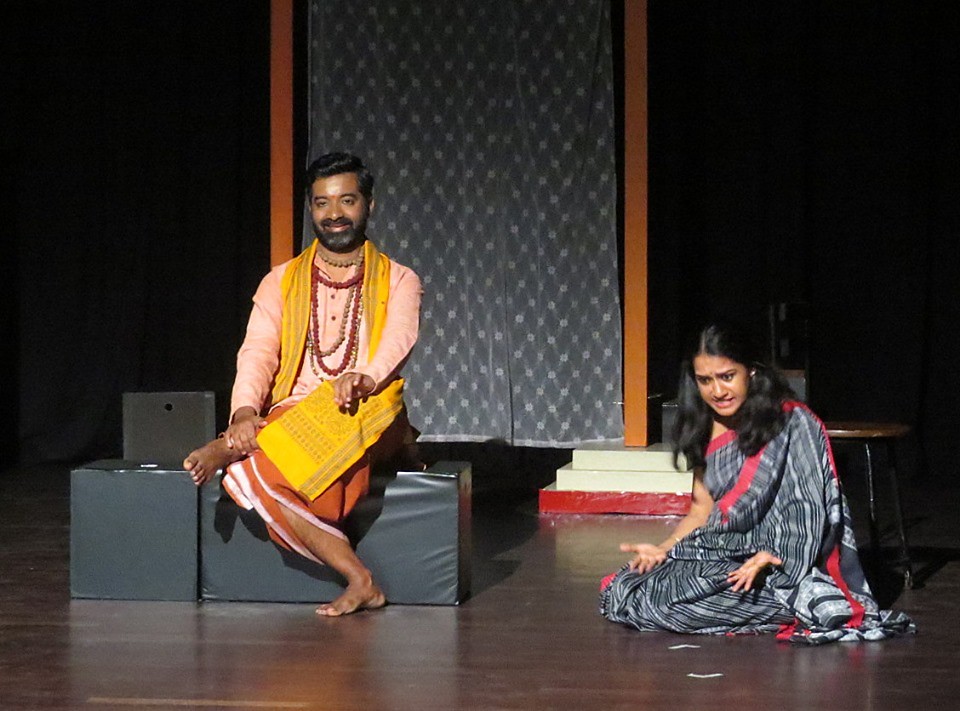 The godman and the supplicant.

The costume design was excellent. Contemporary clothing, with ethnic wear for the sutradhars, sarees for the women and both formal and informal wear for the men, conveyed a sense of both the everyday nature and the earnestness of the topic at hand. Intellectual property rights may be decided in the refined heights of think-tank towers, but it is everyday people that they affect.

The placement, and removal, of various props (especially the black-painted wooden boxes) did take a little time, and though it did slow down the play, probably, with practice, this can be streamlined. 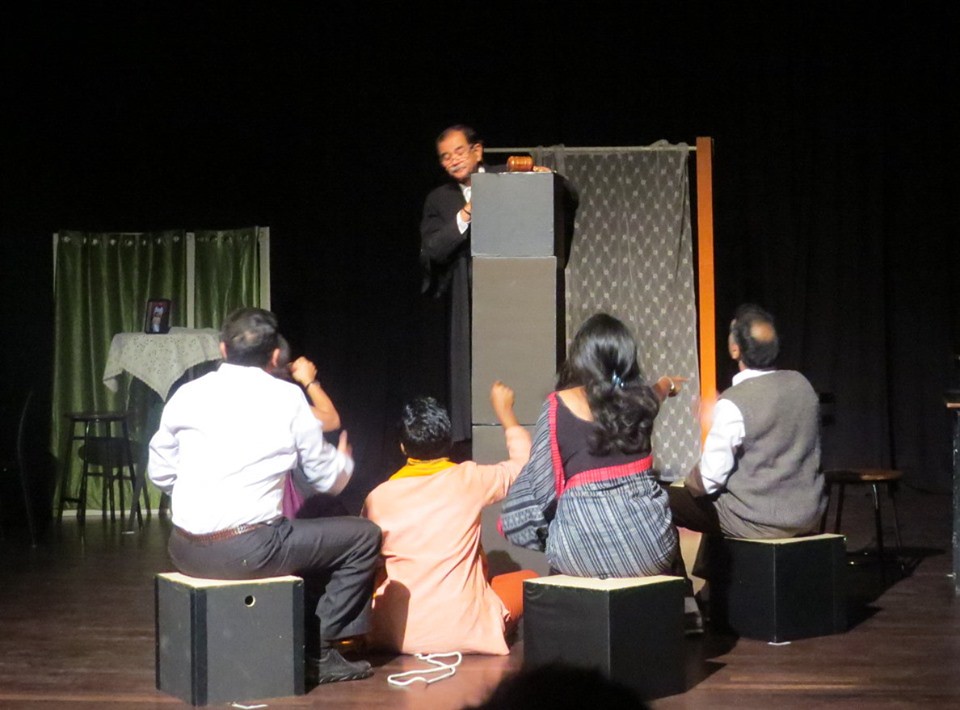 All concerned demanding their legal rights.

In all, it was a production that has much promise; with some more rehearsals, and streamlining, it can be a lay that brings home to the audience the ethical and moral dilemmas that accompany today’s modern scientific and technological developments, and asks, in telling terms, what these mean in human terms. Can parenting be subject to patenting as well? is the question that the play raises. 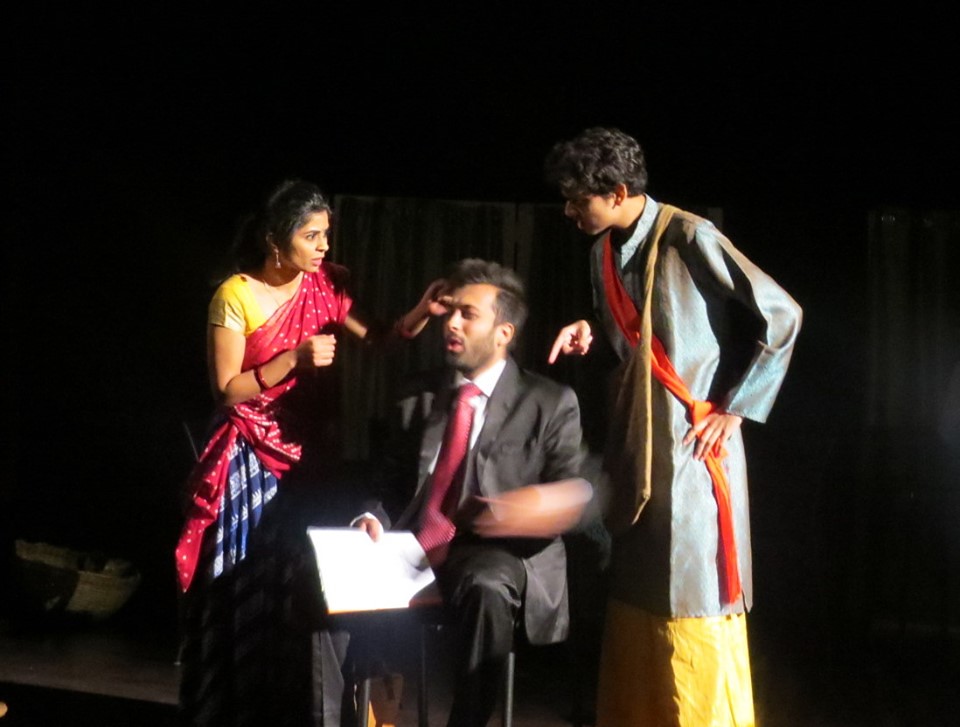 The 18-year-old Designer Test Tube baby with the two sutradhars. 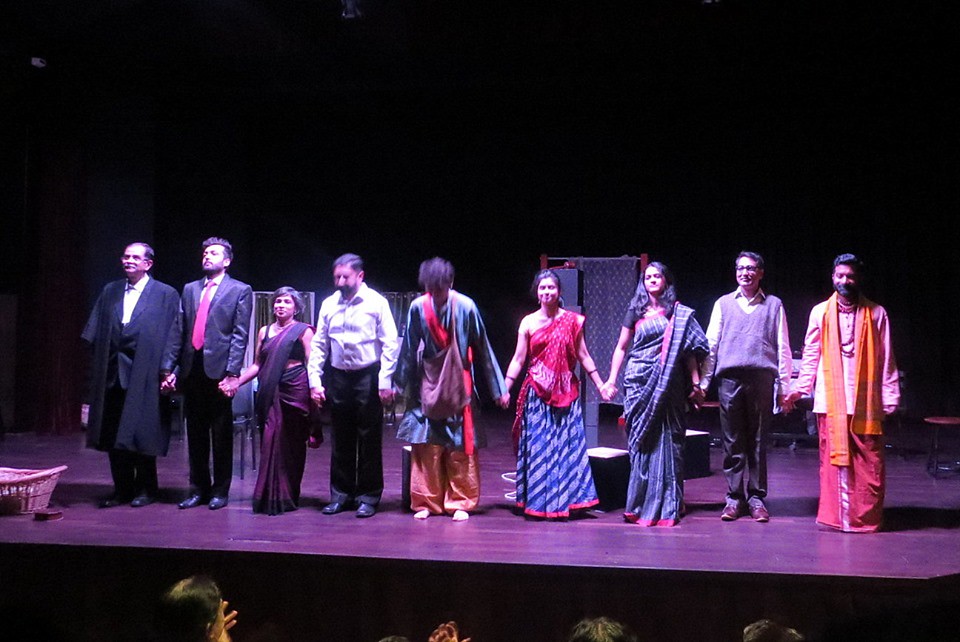 Cast taking a bow after the performance.

All photos by Deepa Mohan.