I went to watch Kriyative Theatre’s presentation of “Where The Shadow Ends” after having read the theatre group’s introduction to it, with an open mind…and that open mind was truly filled with sights, sounds, concepts both abstract and concrete, in the one hour and twenty minutes that the play lasted.

The narrative, as the group says, is surreal;  the play travels through myths and history that are common across cultures. The play (mainly in English, but with touches of Kannada and Sanskrit here and there)   uses contemporary movement and text to explore the space between reality and shadows of the past. The past, in this case, moves from ancient India to the recent years. The protagonist is at once Seeta, the daughter King Janaka, and Bhumi, who is the adopted (also found in a field) daughter of an estate manager, who tries to live within the confines of her “arranged” marriage to a ‘successful” husband who does not satisfy her emotional needs, busy in the pursuit of his career. There is also a parallel allegory of the very cast of characters rehearsing the scenes of the play, with the new actor from Serbia turning traditional ideas about marriage, fidelity, love and lust on their heads. Shreekanth Rao’s play did, indeed, make the audience think as well as laugh. 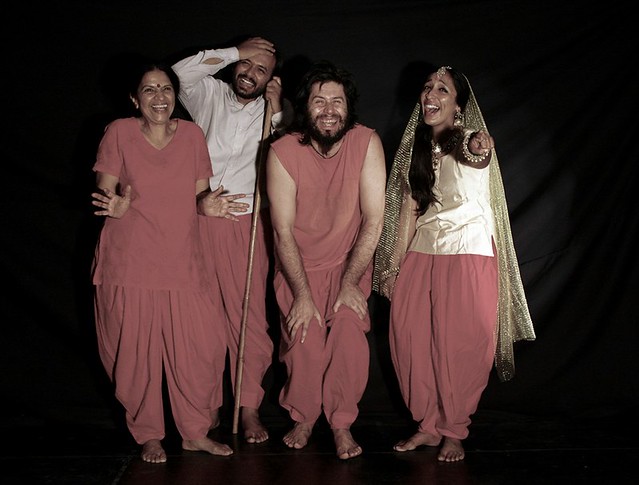 Four actors, including one not from India (in the play he’s from Serbia)…Laxmi Chandrashekar, Kristian Al-droubi, Preethi Bharadwaj and Vinay Chandra, carried the show beautifully. The character of Seeta/Bhumi, her father, her husband, her mother…they were handled by different members of the cast at different times. Kristian (playing himself?) was both the new actor in the production, and Ravana. There were references to other myths, too, from the desert sands of Arabia, with the monster “Baschelik” (if I have the spelling right). Whether it was just acting, or dancing, or the beautifully acrobatic choreography of the abduction scene…the cast showed their versatility. The comic timing, the punch of certain lines in the script…all of it was impeccable. A lot of practice has gone into the production, and I salute the stagecraft.

The music was one of the most intriguing and attractive features of the play. Vocals by the cast, and music that ranged from Western to Eastern with ease; Jayadeva’s ashtapadis being recited as Seeta casts her ornaments down, the humming and chanting of children at play…the music wove the narrative together.

The set design…was just the stage as it was; it was the imaginative use of the props (a set of staves, scarves, one “golden-deer”-type helmet, and one drum (used in the opening and closing scene, both similar to each other., the last scene closing the circle and the denouement.) I must also mention a glittering piece of apparel, which, though never referred to directly, caused much hilarity as it was obviously a chastity belt!

The costumes were what I call “modern ethnic”, flowing Indian lines, with angrakhas and scarves turning into turbans…and sometimes stuffed into the women’s abdomens to denote the pregnancy of Seeta.

Both the lighting and the sound design were excellent. So smoothly did it go that one had to remind oneself, as a reviewer, that they were excellent because they were so unobtrusive. Various characters were highlighted, left the light, and moved into the shadows after which the play is titled. “What is a person without a story?” asked Laxmi Chandrasekhar, and the story includes sound, and light.

The audience was deeply involved from the very beginning, and though they took all the characters to heart, Kristin/Ravan was the clear favorite, as shown by the extra hard applause he got when the cast took their bows. We laughed at the local references, at the way “our epic”’s values appear weird to him. We could almost imagine Ravana as a man who loved Seeta, did not touch her or harm her, and took her to be his, not understanding why she should want to be with a man who treats her the way he does…without affection, without consideration.

I just read what I wrote and it seems to be all praise. Do I have no criticism? Oh yes, a small one but important nevertheless. There was no brochure at all about the play When someone spends so much time watching a play, surely they would like to know a bit more about the production, the cast and the crew. Someone next to me was talking right through the introduction of the crew, and I had to visit the FB page of the production to get the names, and the right spellings.  Please, Kryative Theatre, do spend a little on a good brochure next time; a tear-off that can be returned with the theatregoers’ names and email ids would also build you a good database of those who follow your endeavors.

I have, in the past, watched more simplistic plays by Laxmi Chandrasekhar; experience seems to have deepened her perceptions, and nuanced her expression of them.

Design and Direction by Veena Basavarajaiah, says the FB page, and I salute the mulit-talented woman! The direction was subtle and never obvious, and the many elements of the production merged in a synergy that made for an evening of enjoyable, and thought-provoking, theatre. I’ll watch your future productions with interest, Kyative Theatre!

If you’d like to see the interview with Veena Basavarajaiah, you can read it here