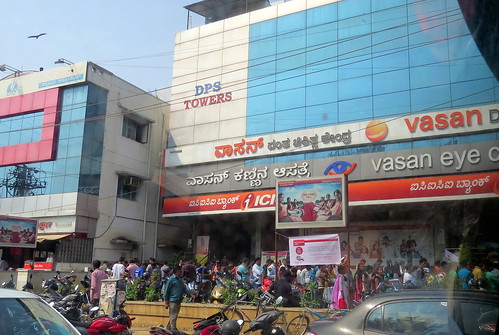 No body questions the intent behind the recent move to demonetize Rs.500 and Rs.1000 notes.
It is the ham handed  implementation by the Babus, living in their 7th Pay commision cocooned largesse,  who did not consider the following points,  and who were blind to the intended consequences,because they have never lived lives of the common man.
1) Absence of card swiping machines in most villages.
2)The honesty of the vast majority, for whom the only avenue was exchange in banks,apart from topping up their vehicles with equivalent  value of demonetised notes,and foregoing the balance.The acceptance of demonetised notes for paying corporation taxes has benefitted only the laggards/corrupt.
In Karnataka,Government Hospitals did not accept the demonetised notes for two days,because they wanted to demonstrate that they were more loyal than the King !
Refusal to permit private hospitals to accept the demonetised currency for  even a week on the specious plea that money changing/acceptance is restricted only to Government Hospitals,as if these institutions are citadels of Honesty,and everybody else is corrupt.
3)THe few lakhs of people,students,tourists,stranded because there were no takers for these currency notes,and whose only option was to starve till they reach the destination,including Lorry Drivers,who promptly stopped plying their vehicles,since banks wanted their original ID cards,during the exchange process, and refused to accept self certified xeroxes.
4) Last but not least what about the Tea Garden workers,and disabled people unable to stand for hours in a queue?
5)What is the use of a 2000 rupee note if it is not convertible into notes of smaller denomination,due to the shortage of smaller denomination notes ?
There was no sense in this decision as it  facilitates black money transactions.The Government should seriously consider restricting the number of such notes.
6) The pre-existing shortage of smaller denomination notes,including 100 rupee notes,which all of us have experienced.
Even you and I have not been impacted in the process, it  does not mean that we should be blind to whats going on.
Lastly,demonetisation will not prevent corruption in the Land Revenue/Tahsildars offices/Registrar’s offices as these crooks will lie low for some time and come back with a vengeance  to replenish their coffers.The only solution apart from E payment is to install CCTV cameras,at designated places for document transfer.
Can the honest citizen ask for a roll back of the 7th Pay commission’s  award.That will save around 35000-40,000 crores ! 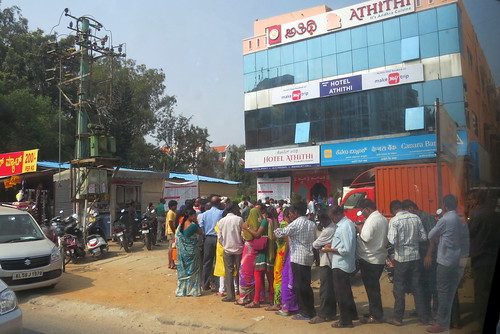 (Photos of crowds at the banks/ATMs on Bannerghatta Road on Sunday, 13th Nov 2016, several days after the demonetization move.)