On the butterfly group that I belong to, one member told us about the Bear Rescue Centre (BRC) at Bannerghatta, and asked for volunteers.It was then decided that several of us would visit the Centre and then decide on who would be able to volunteer. Since the Centre personnel wanted only 15 participants in each group, two groups of 15 members each were constituted. One group visited on Saturday, the 16th of March, and the other on Saturday, the 23rd of March. I was with the second group, and my anticipation was not disappointed.

The visit to the Centre, which is one of ten such facilities all over India, run by Wildlife SOS (an NGO started by Kartick Satyanarayan and Geeta Seshamani) started with all of us gathering in the Bannerghatta Zoo parking lot, from where Chiranjib and Prajwal came and picked us up, and took us through the scrub forest of the Bannerghatta National Park to the Centre. Set amidst bamboo thickets and grassland, the low buildings of the Centre blend well into the landscape.

Chiranjib gave us an introduction to the various bear species found in the world, and then narrowed down to the species of bears found in India, and the 77 bears that have been rescued and are now at the centre. A slide presentation showed us some disturbing images of bears that were ill-treated by those who captured them and sold them to entertain others by dancing; other bears were caught in snares for the wildlife trade. Chinese medicine requires the gall bladders of bears, and several bears have been rescued from traps. “We had more than double the number of bears here,” points out Chiranjib.”We have managed to stop the practice of dancing bears, and so we now get only bears that have been injured in the forest. Now, as the bears age and die, the numbers are growing less.” Indeed, as Dr Arun strikingly pointed out, the goal is not to need such a Centre at all…but that is not likely to happen in the near future. The bears are left loose in an area of about 74 sq. km, coming in to their enclosures for food; some, said Chiranjib with a smile, go first to one enclosure, eat the food there quickly, and go to the next, looking for second helpings! 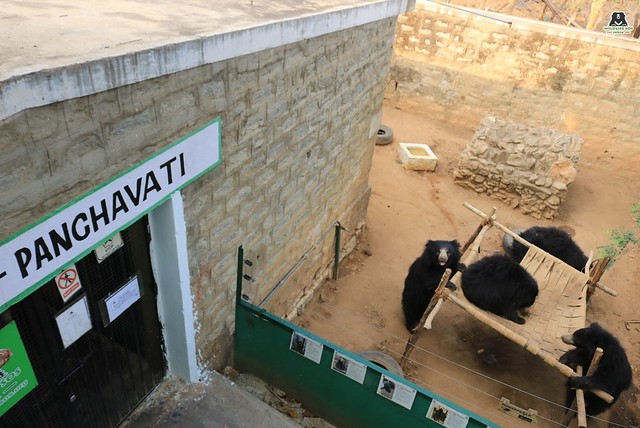 Bears playing with the equipment built for them, at the Panchavati enclosure. Photo courtesy: BRC, Wildlife SOS

As we then went to look at the enclosure where food is given to the bears, more facts emerged.

Bears with simple injuries are treated at the rescue spots and allowed back into the forests; but those that have been badly hurt, or have had their diurnal rhythms disturbed (though they are nocturnal animals, they are made to be active and walk through the day by their captors),have to be put in the rescue centres for the rest of their lives, as they can no longer survive in the wild. As Dr Arun, the resident veterinarian who let us look in detail at the Operation Theatre and talked about the difficulties of treating wild and distressed animals, mentioned, the Centre is virtually an “old age home” for bears, where they will live until they die. Hence, the bears have to be given a diet that somewhat approximates what they would eat in the wild, with fruits and honey along with a ragi mixture. Many animals, used as dancing bears, arrive with their molars broken or forcibly extracted, and many also have cataracts, and most commonly, tuberculosis, from frequent contact with human beings who might be diseased and malnourished themselves.

We were then shown the “squeeze cage”, where the animal is put with as little difficulty to it as possible, in an upright position where it can be tranquillized if needed, and treated. Bears in the wild are creatures of uncertain temperament, and this characteristic might predominate in a stressed or trapped bear.

To allow them to forage as naturally as possible, there is a Termite Raising Unit, where termite hills are raised for the bears to raid as they would in the wild. 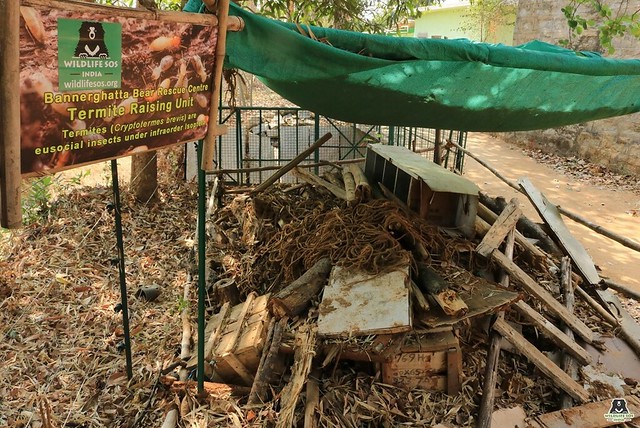 The kitchen tour was fascinating, as we saw the various millets and grains that go into the bears’ daily diet. Sri Alauddin, when we visited at 11.30am, had already started cooking the ragi porridge for the bear’s evening meal, which would be cooled and given to them at 4.30pm. The diet for each bear is approximately 8 kilos of ragi porridge twice a day, along with two eggs, and approximately 2 kilos of fruits and enrichment treats. 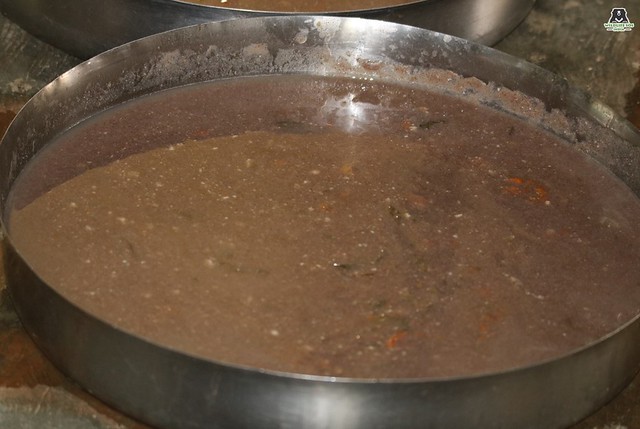 The ragi porridge in the shallow steel containers, that the bears eat twice a day.Photo courtesy: BRC, Wildlife SOS

Honey and milk are added to the porridge, and sometimes they have to be added in front of the bears, to convince them, like one does with naughty children, that they are getting what they want! While we were in the bear cage building, several of the bears were waiting impatiently for their lunch, and one kept banging at the bars of the cage from the outside enclosure, demanding to be let in and fed! Both Chiranjib and Prajwal showed a great affection for these shambling animals as they described how each bear had a different personality and type of behaviour.

We were then taken to the Jambhava area (the other enclosures are Kishkinda,Panchavati,Chitrakuta, and Dr.GKV Block) and from the rooftop, we had a view of several of the bears foraging for the fruits (watermelons that day) that the staff left for them, in the open. It was delightful to see several Chital stags and does also coming for the fruit…and several birds coming to share the feast, as well! 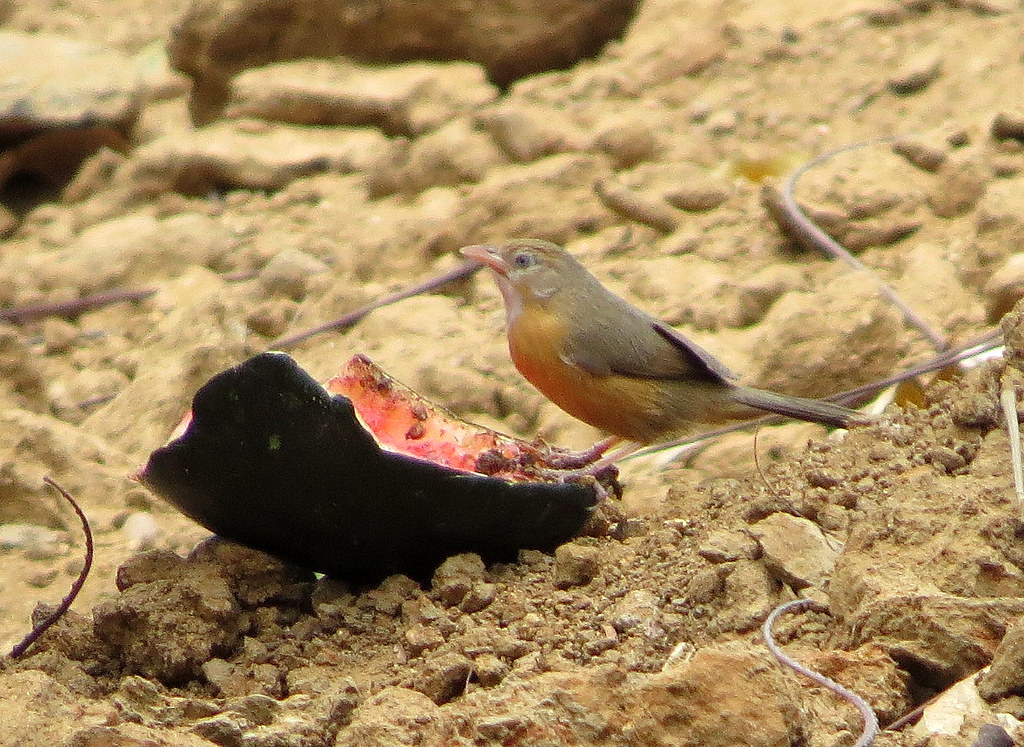 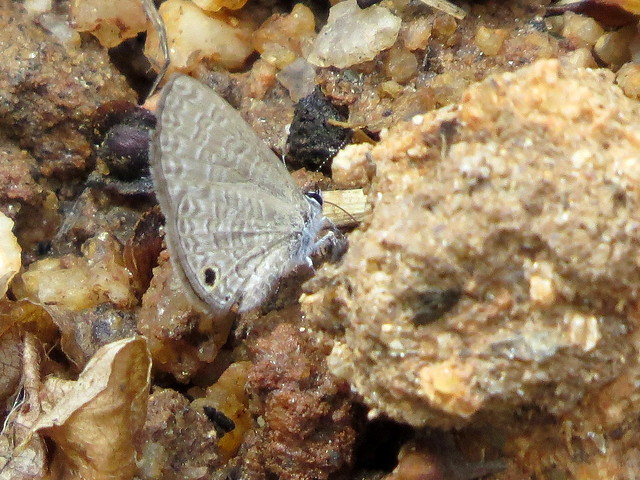 Several volunteers come regularly, and help the staff make the exercise equipment that the bears use to climb up and down on, and play with. Old, torn fire hoses are woven into rough thick sheets, and balls and sticks are added. These are made again and again in different ways as the bears’ play demolishes them.These are called “enrichment” too, as they do much to improve the quality of the bears’ lives at the Centre. The photo above gives an idea of the equipment.

We also looked at the differences in design between the older and newer bear pens, and found that changes had been made for the greater comfort of both bears and staff. Surely, this is a not well-known form of architecture and design!

Dr Arun, a veterinary surgeon who started with the main centre in Agra 17 years ago, was soon posted to Bannerghatta (which was established in 2005). He has remained here ever since. He talked with utter sincerity about the bears’ plight, without any sentimentality; his words were all the more effective because of this. “We do not want appreciation,” he says, “because we are quite aware of the work we are doing. What we want are volunteers, who will come and help our work in various ways.” The Centre is planning to have children from neighbouring villages come and know more about the mammals that share the forests and fields of Bannerghatta with them. They would like these children to know,not only about the bears, but about the other fauna, and the flora of the area, too, so that they know, and hence care, about the place they live in, and the treasures it holds.

The whole tour was well-planned and conducted, and was very informative, with an articulate Chiranjib and Prajwal filling us in on details, and Karthikeyan documenting the trip on camera.

We were not allowed to take photos of the Centre, but could take pictures of the birds and plants that we found interesting.There were quite a few of such plants and trees! 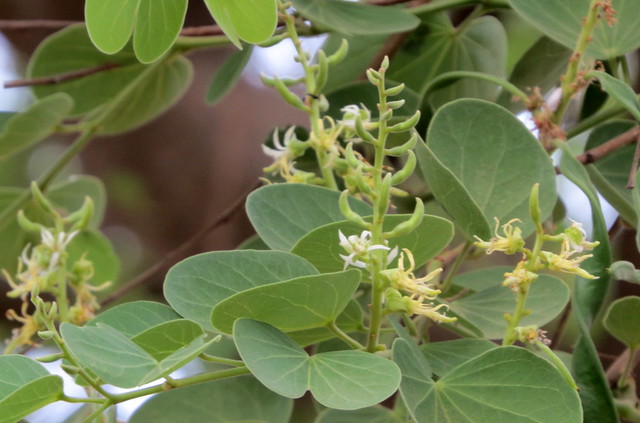 The Centre has much to be proud of. Over the years, the dependency on power from the grid or generator has been reduced by the addition of solar panels. Everywhere I found plastic bottles recycled to hold fruits or food, or used in other ways. Trees have been planted, greening the area, but the grassland has been left alone in its natural state, with bamboo and other kinds of grass providing shelter to other wild creatures and birds.

Indeed, we found so much of interest that we did exceed the time schedule and we finally had our lunch at the bus terminus area at about 3pm instead of 1pm as we had thought. Such was the care and affection lavished on the bears, that we joked to the staff that if provided with so much nutritious food along with milk and honey, we wouldn’t mind coming here ourselves in our old age!

We ended the tour with a group photograph taken by Prajwal (I clicked the group too) and returned to the outside world, very impressed with the work that is being done at the Bear Rescue Centre, and determined to work out how we could pitch to help the lot of the unfortunate animals who live there, and the dedicated human beings who try to make their lives as comfortable and forest-like as possible. 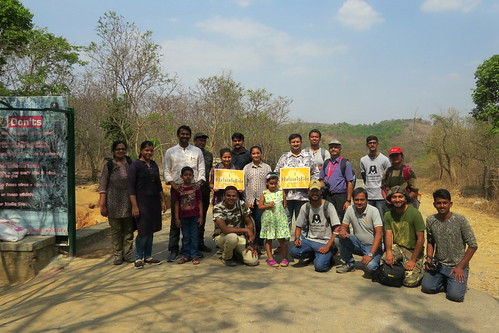 We were able to do a bit of bird-watching, too. The bird lists

from the Zoo parking lot while we waited to be taken inside, is

and from BRC area is