There are two strong points of view about stray dogs in our city. One is that they are living beings, and deserve to live like many other creatures who share our living space.

The other is that they are pests that must be removed. This view is especially held by those, and those whose children, have been bitten, sometimes fatally, by some of these animals.

The method of removal most advocated is to sterlize the dogs, and BBMP, is not doing much about it. The numbers of the stray dogs on our roads is inversely proportional to the political will to remove them.

I often watched these reviled, abused creatures, who seem to inhabit a planet of their own, only appearing to share our castaway food or sniff hopefully at us. Here are a couple of dogs, who were burying deep into a pile of construction material, with which we do not scruple to litter our footpaths: 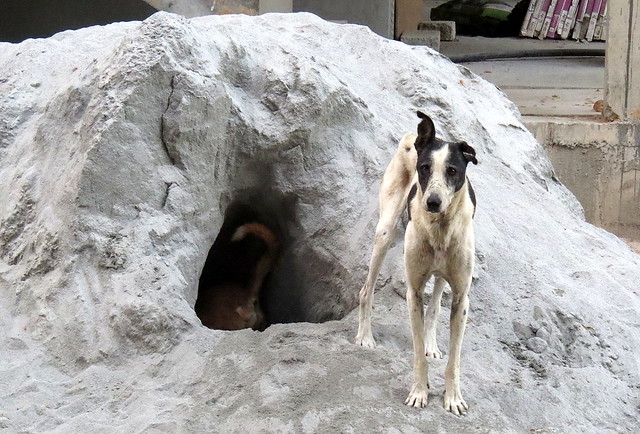 Do dogs make such holes in the earth? What prompted this behaviour? Were they only playing? I do not know.

But as I walked on, I was wondering what would become of these two canines, and so many others in the streets of Bangalore….