How often have we seen empty sites in a residential layout, not just going waste, but also being a source of worry for the residents?

The worry arises from two main factors: dumping of waste, and the unwanted pests that the waste attracts.

For some reason, all our vaunted civic sense does not seem to operate when there are handy empty sites. Whether it is the residents themselves, or their domestic help… an empty site seems to become a great place to throw one’s waste into…especially if it means avoiding segregation of waste.

The waste could be building material, or even just organic garbage, and the latter leads to the second problem….that of rodents infesting the site. This, in turn, attracts other creatures like snakes that prey on the rodents.

Any attempt on the part of the residents to solve the issue is usually stymied by several problems. One, they do not know who the owner is (in case of joint ownership or family litigation, it could be several people); the owner lives far away and is not bothered about the upkeep of the site; or resistance on the part of the owners, fearing a takeover of valuable real estate.

The residents of ISRO Layout, near Banashankari, have addressed all these problems and started a green initiative called Space Farms. The effort was formally launched on 5 November ‘17. 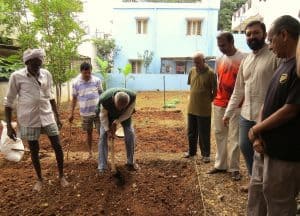 The ball started rolling with Mr.Deepak Jois, who considered how these empty sites could be utilized. He approached Mr. Dilip Shirolikar, the president of SCWA (Space Colony Welfare Association), the residents’ association in the layout, who proved to be very receptive. Along with other members of the managing committee, they approached the owners of several sites. There were positive responses from a few of them. Mr. Suresh Kumar took up an active leadership role, also drafting several other neighbours into the project. It was decided to have a formal launch, so that all residents of the layout would be aware of the effort.

The plan was to start and sustain community farming on these sites. The explicit agreement with the owners of the sites was that they could take them back at any time. The launch site was cleared of all weed and debris, a process that cost approximately Rs.3500. Mr. Suresh organised the clean up of the site. Some organic compost was added to the soil.

Deepak then invited Mr. Gangaswamy, former Deputy Director, Department of Horticulture, Govt. of Karnataka to be a consultant regarding the logistics of farming.

Seedlings, such as tomatoes, chillies, cauliflowers, cabbage and greens were planted on the day of the launch. Besides this, the papaya, guava and curry leaf plants already existing, were added to the list. 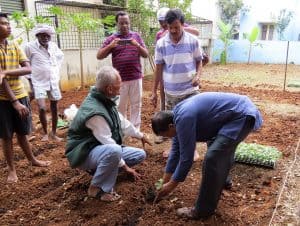 The launch drew quite a number of residents, who were happy to see the debris problem solved on the one hand, and an organic farming opportunity on the other. Mrs. Hema Nagaraj smiled as she planted a tomato seedling, as did Mrs. Ragini Suresh. 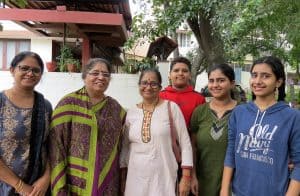 A festive atmosphere prevailed at the launch, with three more sites planned in the near future. Several children joined in enthusiastically. The launch wound up on an optimistic note and the residents hope that this initiative which they have named “Space Farms”, can be replicated in other housing communities also. 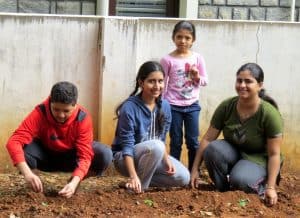