Sometimes the shadow is just as interesting as the substance.

Nikhil from the Hindu interviews Michael and Wendy, while Geeta looks on. 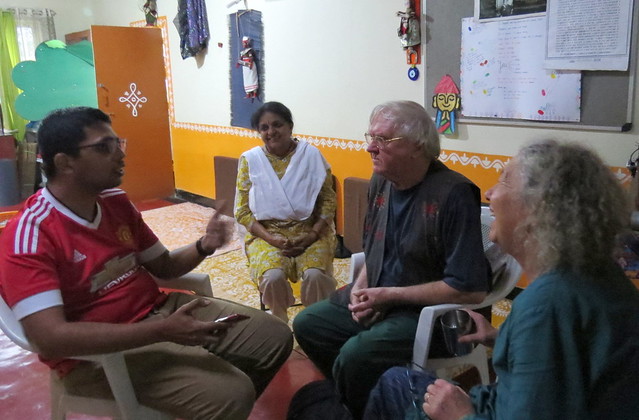 Shadow puppet theatre has long been a part of the traditional arts of many cultures,but when Wendy first got interested in it, she found that there was no tradition of it at all, in the United Kingdom. She built up her shadow puppets, and the shadow puppet theatre, from scratch, using any of a wide variety of materials to hand, and learning the ways puppets can be moved behind the screen, by experimentation. “Traditional shadow puppetry has set rules,” Wendy says, on a cloudy afternoon. “But I invented as I went along.” She did take the help of technology, she says; “If, for example, I wanted to make the silhouette of a buffalo, I would look at images on the net to be able to draw one.” 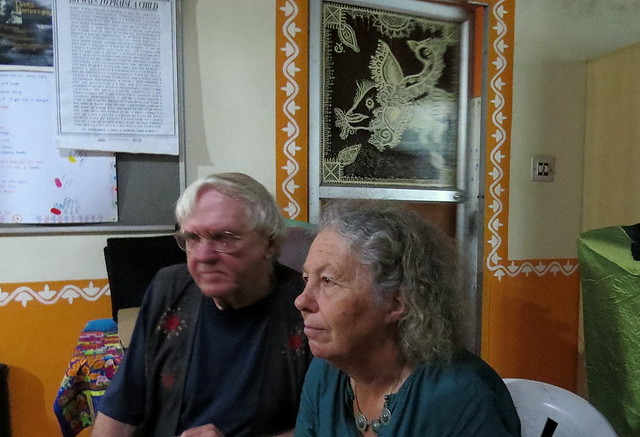 Wendy, therefore, describes herself as a “maker”. Whether it is the puppets themselves, or the proscenium on which they act out the story that Michael tells, they are all her own creations.

Michael takes up the story, from the viewpoint of telling the tale. “The puppets themselves don’t talk, in our shows,” he explains. It’s the audience’s minds and imagination, he says, that fills up the details: “The mind has to fill in the other things.” “I see the story in my inner mind,” he adds. Both he and Wendy sometimes improvise as they go along. The occasional tussles of each wanting to do something different, and the resulting compromises, make for interesting theatre!

What is the longest shadow puppet theatre they have staged? Michael talks of the many tales he’s picked up all over…the Icelandic and Irish mythology, the tales from the Ramayana and the Mahabharata, and the Old English folklore. Their story of Beowulf is about an hour long, Michael says, as is the production of “Into a New Time”. He mentions tales based on the Sargasso Sea. Though the content could be very adult, he explains, he finds that it’s the adults who are most often captivated by the simplest of tales. “It’s been 31 years of an amazing journey with the stories and Wendy’s puppets,” he says. He describes himself, smilingly, as a “wordsmith”, who spins and relates the tale that Wendy brings forth with her puppets.

The puppets can vary greatly in size. “I’ve made some giant puppets,” smiles Wendy. “For the Arthurian tale of

Gawain and the Green Knight

I made a Green Knight puppet with a giant head, with creepers and plants growing out of his face, ears and all…and the puppet had to be beheaded in the course of the story! “Velcro came in handy!” she laughs.

All the pupppets only monochrome shadows? “Oh, no, you just saw the green grass, the coloured flowers and the other things I created as the stage,” explains Wendy. “I use anything, such as glass paper, that is translucent and will let the light through. Sometimes the mixture of colours gets me interesting combination, sometimes the pigments merge into black.” She also uses coloured lights as well, to enhance the silhouettes.

How does Wendy take care of the puppets? She laughs. Her craft, she says, is very much “of the time”, and the puppets can disintegrate into their component parts or, as happened with one giant puppet, get composted! Fabric, willow, glue, ratafia…she uses materials that can decompose.

For the workshop, Wendy has brought along a puppet stage, with three panels, and specially devised lighting. She must have this, as daylight cannot be focused sharply on her little stage. She’s also created a small mobile stage that can be slung across the story-teller’s shoulders and secured at the waist, so that the story teller can move round while staging the shadow puppet show.

Jayashree demonstrates the mobile stage and shows some of the puppets: 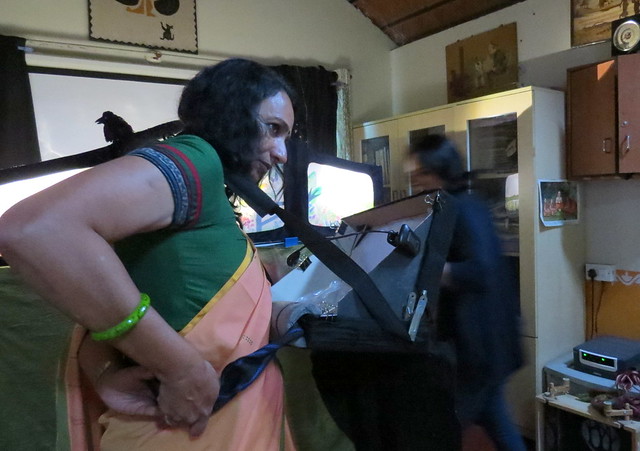 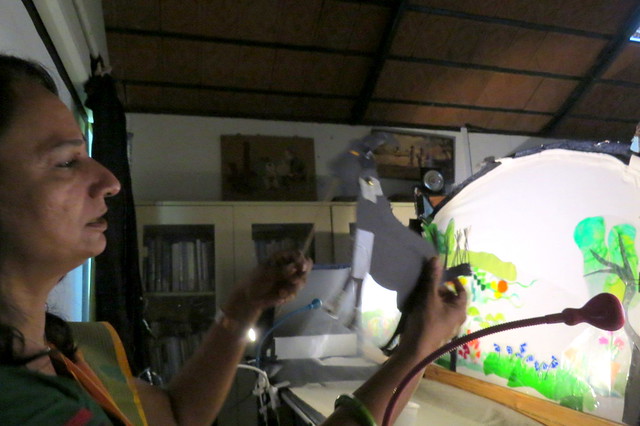 On their first visit to India, at the invitation of Geeta Ramanujam of Kathalaya,this couple from Devon seems very much at ease. Michael tries out a vada with chutney, and interacts with the ten women, from very diverse backgrounds, who have come to participate in the workshop. Anu, Shalini, Rakhi, Savita, Shirin, Archana, Anshul, Rohini, Pavitra and Anusha are learning a bit of this art and craft and creating their own shadow puppet theatre…an exciting prospect for them.

Participants at the workshop: 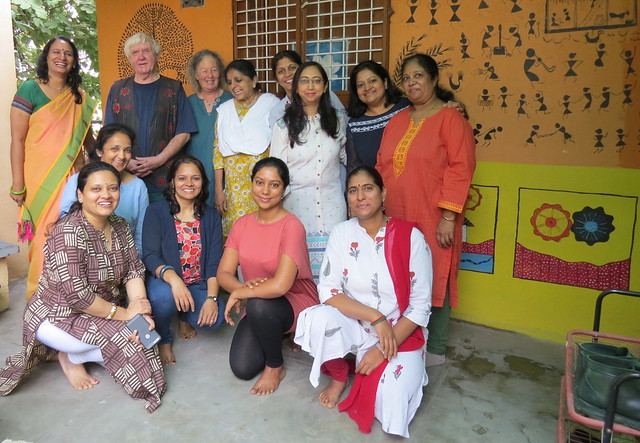 Scenery created by the participants of the workshop: 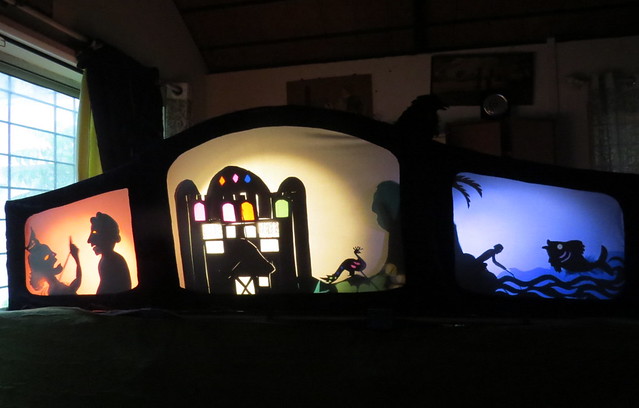 We wish Michael and Wendy success with their first foray into our city and country, with their spinning of tales and creation of a world of the imagination.

A moose and a billy goat, in the short demonstration before the workshop: 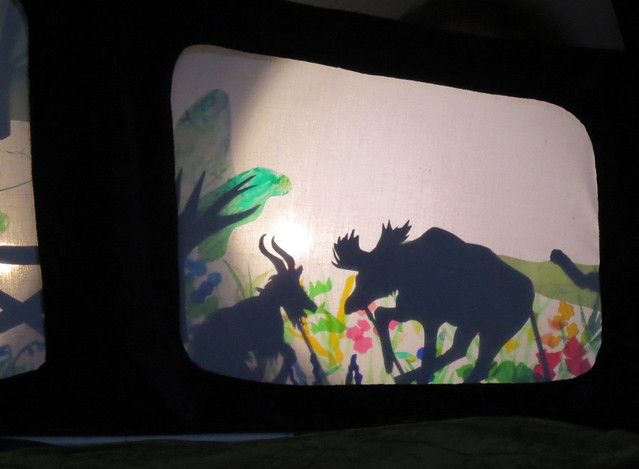 Here is a video that Jayashree took, of the short demonstration:

Michael and Wendy will be staging two performances with Geeta Ramanujam on Sunday, 25 November, 2018. Here are the details and the links:

Link to the event,

There will be another performance at 5.30 to 7.pm at Courtyard Koota, Good Earth, Kengeri, on the same day.

Link for the tickets,