On my train journeys, recently, I have come across this sign in the A/C 2-Tier coaches: 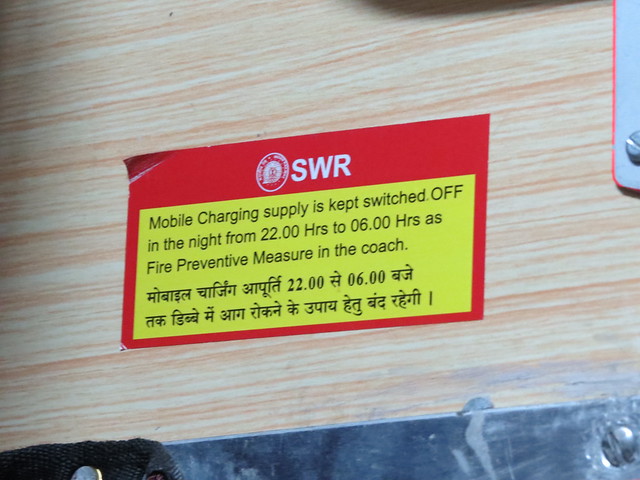 I fail to see any sense or logic in this. The air-conditioner in the railway coach is running (or, is at least supposed to run…on the 21st of March, I travelled in an A/C 2 Tier coach where the air-conditioner did not run, and since the train started at 22.40 hrs and reached at 04.40 hrs, there was no way of getting a written complaint lodged, and hence a claim for fare refund….but that’s another story).

The fan is running, the lights are on, including night lights throughout the night, even when the passengers have switched off the main lights. The reading lights are on at the passengers’ convenience (when they work, of course.). If all these electrical circuits are working, what, then, is the reason to switch off the mobile charging points alone?

It is ridiculous to cite “fire preventive measure” as the reason. Could the Railways give any proper rationale for this?

Also, if a train (like the Bangalore-Chennai or Chennai-Bangalore Express) starts after 10pm and reaches well before 6am, does it mean that passengers cannot charge their mobile phones or laptops at all, in spite of such a facility existing? As it is, every berth is not provided a charging point, and this notice just takes the inconvenience to a new level.

Another notice which has just appeared is in the delightful Indglish dialect: 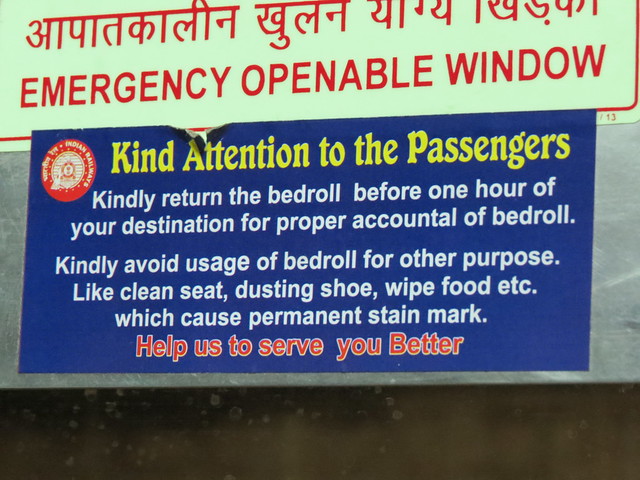 Can’t the Railways really use better English than that? “Accountal?”

Returning the bed sheets one hour before arrival? Really? The train I was on reached Chennai at 04.40 hours, and the return train reached Bangalore at 05.10 hrs. Am I really expected to get up one hour before that to return the “bedroll”?

And it tickles me no end to think of the various purposes that I never knew bedsheets could be used for…if the Railways had not listed them helpfully!

When are we going to get out of this mindset of “minimum possible facilities and maximum possible inconvenience” in our customer service organizations?