In Bangalore in the early 90’s, I was very impressed by one very young dramatist who wrote plays in English that showed a talent and an ability to mirror social issues well beyond his physical age.I watched every production of Mahesh Dattani’s plays that I could, and bought the book of his plays to read the rest.

I have also grown up in Kolkata, enjoying the vibrant Bengali theatre scene; to me,there was no greater  accolade of a person’s creative talent than the words, “O theatar korcche” (He is into theatre).

So when my friend Shangon told me that a Bengali translation of Mahesh Dattani’s “Where There Is A Will” (by Meghnad Bhattacharya) was to be staged at Ranga Shankara, on the 24th of April, 2014, by Smarannik, an amateur Bengali theatre group of Bangalore, I was very happy to go.

The play revolves around Hasmukh Mehta (played by Sayandeb Bhattacharya, who also directs the play) a successful garment tycoon, and his family, which he scorns; a wife, Sonal (Subarna Kundu), an inept son, Ajit (Suchandan Shyamal), and a calculating daughter-in-law, Preeti (Priyanka Bhattacharya), who is expecting a child shortly. His cynical humour about them persists until, suddenly,he passes away. His ghost then takes over as a kind of commentator, who witnesses the chaos that ensues when his will is read. The family has to come to terms with the fact that he had a mistress, Kiran Jhaveri (Satabdi Bannerjee) who is now the execturix of the trust he has created, and who will now come and live with them. How the spectre watches, and reacts, to the way the characters work out their equations, forms the denouement of the play. 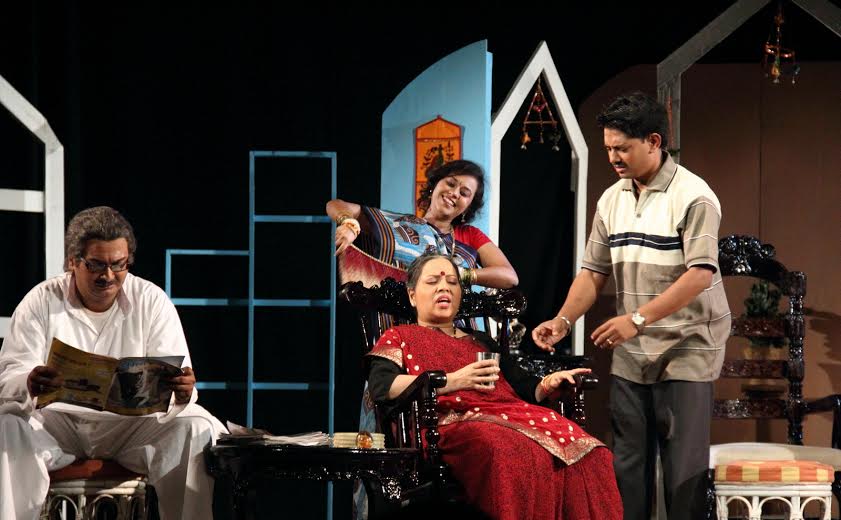 The cast of the play filled their roles admirably. Though there was a slight flubbing of the dialogue initially, they quickly settled down and even lengthy dialogues were delivered with panache, as it was the 9th show of this play that was being staged. Perhaps, one might think that the characterizations tended a bit towards caricature, and there might have been a benefit in understating things a little. But the audience seemed to be enjoying all of it, and loud laughter greeted several one-liners.

The mood of the play was well enhanced by the music (Murari Roychoudhury) and the lighting (Soumyajit Ghosh). The colours on the spectre of Hansmukh certainly evoked some creepiness as well as some humour!

The sets (Bilu Datta) were simple, and yet, set with arched ways, allowed for three “areas” in the house: the bedrooms of both the Mehta couples, and a central dining area. These were utilized in well-choreographed moves, and often served to change the mood of the play, as when Hansmukh goes into his bedroom, holding forth cynically about his family…and death overtakes him.

The props were also simple, and yet some of them were very creatively used. The way Kiran hands a paperweight to Ajit, takes it back, and gives it to him again, symbolizes the fact that she is in control, and what she will allow Ajit to have or not to have, is up to her.

The costumes, which were probably decided by the cast themselves, were simple and everyday clothes. And yet, subtly, they managed to put some points across. The fact that Sonal and Preeti wear sarees in the traditional way, that Ajit shaves off his hair while conducting his father’s rites..these serve to emphasize the traditional outlook of the family, and underscore contrasts, such as Sonal’s fairly open way of thinking about her husband’s mistress. And while on this topic, here’s a totally unprofessional note of admiration about Priyanka’s long, lustrous hair and beautiful eyes…”ki chokh! ki chool!” 😀

Those words bring me to another point about the play: the language. This was not couched in any literary Bengali, and at times, it did descend into more of the vernacular than I, personally, would have liked; but it was, after all, a heavily-charged situation that was developing, so perhaps the slight lack of polish in the language was part of the mise-en-scene.

The art work (Subrata Sen & Arpan Dev) was also amply evident in the posters and even in the design of the tickets. I do wish they’d had brochures, as many of us could not get the names of the cast clearly (and the crew were not introduced). Sayan kindly emailed me all the details so that I could write the review without making mistakes with the names; and I do understand that budget constraints can be very tough to handle. But a small printed brochure, with a tear-off piece which the audience member can write the contact details on and leave with a member of the group..that would be a big bonus for Smarannik in terms of future contact with the audience, and feedback.

Though I’d say that the play could have been shortened a bit, I must add that nowhere did the pace flag, and certainly, the interval was set (by the original dramatist) at a very key point in the action. Most plays now run for 90 minutes or so, and it is no easy task to hold the audience’s interest for more than two hours.

In all, a great production, one which I enjoyed very much, and would recommend unhestitingly to the Bengali theatre-going public in our city. Watch out for other productions from this talented theatre group,too!