We often stop at one of the beautifully designed cane “stalls”, which can be packed up and carried around, and equally quickly set up somewhere on the roadside.  Little puffed, fried balls of semolina, in a large bag; a large pot containing “paani” which is tamarind juice, flavoured with spices, and several potatoes, lentils and sometimes boiled peas,which are mashed together, with or without onions as the customer prefers. 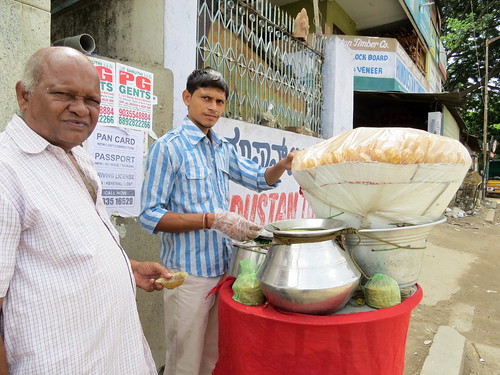 I’ve been talking to a few of the young men who sell the “pani puri” from their stalls, and I realize that most of them seem to come from Bihar, or Orissa.  Most of them talk of very difficult conditions in their villages, and the need to come to a city to earn some money.  They seem to take their migration to a distant city pragmatically.  “In the cities near our villages, we can’t sell these things,” says Subhankar, shrugging. “Here I often get people who are from the north and who ask me where I am from.”

Many of them stay in the slums, and it’s a distant dream to get better accommodation, as all spare cash is sent back to the village (usually, by Postal Money Order). They seem to have a cup of chai when they can and eat once a day, a late dinner which might be in a communal eatery. (I’ve not seen one of these.) A square meal a day is not always a given.

“We don’t like the monsoon,” they say unanimously. “The day’s sales suffer.” The puris are made by a group of both men and women, they say. At this point, they clam up…and look wary. I do not probe further. The weather may be scorching, cold, wet….but you will find these young men in front of most malls, and often, at random spots on the pavement, too.

To the panipuriwallahs of our city…trying to eke out a living in a tough world.